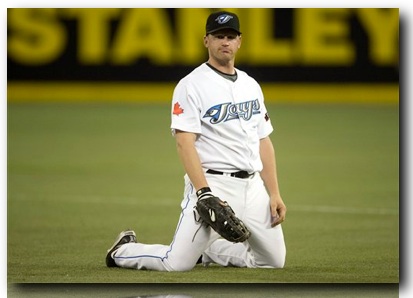 What’s going on with Lyle Overbay this season? His stats rival those of an NL pitcher. What’s wrong and what needs to be fixed?

Lyle is getting too many plate appearances vs lefties. Pundits point to trade value, platoon issues, infield D, etc for Overbay’s number of starts vs LHP. Whatever. At the end of the day Overbay can’t hit left-handed pitching.

If Cito wants to get him back on track they need to put Overbay into situations where he can succeed, not fail.

There’s really no point in breaking down specific zones, counts and pitches. Overbay isn’t hitting much of anything. Traditional 9 quadrant location charts are as blue as California.

However, one point of statistical interest, pitch type-wise, is Lyle’s percentage of swing and misses.

% of swings put in play

Sample sizes are certainly small. Still, Lyle isn’t getting the bat on the ball vs off-speed pitches early on this season.

Historically, over the past three seasons Overbay has GB/FB (groundball/flyball) ratios of 1.13, 1.34, 1.59. This makes sense. He’s a slashing doubles hitter that doesn’t try to loft HR’s over the fence.

This season his GB/FB ratio is all the way down to 0.71 . He’s putting the ball in the air. Checking his internal flyball ratio confirms this, as he’s hit flyballs 51% of the time. Linedrives are down to 12%. GB are down 36%.

Simply put he’s not hitting linedrives and is lifting easy flyball outs to the outfield. Based purely on the stats Lyle must be getting under balls and is most likely trying to do too much. He needs to flatten out his swing and drive through the ball to get on track. I imagine the Jays new hitting coach Dwayne Murphy is working with Overbay on this facet of his game.