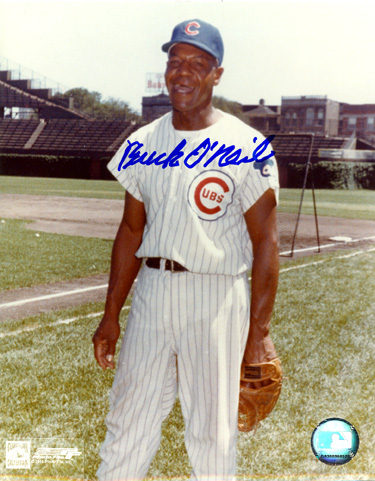 It is with great sadness that I learned Buck O’Neil passed away late Friday evening. I was first introduced to the enigma that is Buck O’Neil when I saw him as part of the Ken Burns PBS documentary, “Baseball.” He was a natural story teller, and I was capitavated by his charisma, his warmth and the colour in his voice as I listened to him regale on how he used to barnstorm with Satchel Paige (Ol’ Satch as he would call him) way back when.

Few men in any sport have witnessed the explansive sweep of history that O’Neil saw and felt and experienced in baseball. John Jordan “Buck” O’Neil is most known for having been a slick-fielding first baseman and manager for the Kansas City Monarchs of the Negro American League. He first began playing baseball in the summer of 1934 where he spent several years “barnstorming” (travelling to various places playing inter-racial games).

It could be argued however that O’Neil accomplished just as much, if not more, off the field. Buck O’Neil left the Monarchs following the 1955 season, and in 1956 became a scout for the Chicago Cubs. He was named the first black coach by the Cubs in 1962 and is credited for signing Hall of Fame player Lou Brock to his first contract. After many years with the Cubs, O’Neil became a Kansas City Royals scout in 1988, and he was named “Midwest Scout of the Year” in 1998 (at the age of 82!!!).

As I mentioned before, O’Neil gained national prominence with his compelling narration of the Negro Leagues as part of Ken Burns’ PBS documentary on baseball. Since then he has been the subject of countless national interviews, including appearances on Late Night with David Letterman and the Late, Late Show with Tom Snyder.

O’Neil was a member of the 18-member Baseball Hall of Fame Veterans Committee from 1981 to 2000 and played an important role in the induction of eight Negro League players during that time. O’Neil was nominated to a special Hall ballot for Negro League players, managers, and executives in 2006, but he failed to receive the necessary 75% to gain admission by one vote (which is an atrocity).

After hearing that he had not been elected to the Hall at age 94, O’Neil spoke to about 200 well-wishers who had gathered to celebrate, but instead stood hushed and solemn, telling the crowd:

“God’s been good to me. They didn’t think Buck was good enough to be in the Hall of Fame. That’s the way they thought about it and that’s the way it is, so we’re going to live with that. Now, if I’m a Hall of Famer for you, that’s all right with me. Just keep loving old Buck. Don’t weep for Buck. No, man, be happy, be thankful.”

This past Summer, Buck O’Neil did something miraculous (to me anyway). O’Neil signed a contract with the Kansas City T-Bones on July 18, 2006 to allow him to play in the Northern League All-Star Game. Before the game, O’Neil was “traded” to the Fargo-Moorhead RedHawks and was listed as the starting shortstop, although after drawing an intentional walk, he was replaced before actually playing in the field. At the end of the inning, another “trade” was announced that brought O’Neil back to the Kansas City team, allowing him to lead off the bottom of the inning as well (drawing another intentional walk). In typical Buck O’Neil fashion, he playfully trash talked the opposing pitchers while strolling to first that they were too afraid to throw him strikes. This game made him the second oldest person to ever play pro ball (he was 94).

The last memory I will have of Buck O’Neil is watching his speech during the induction ceremony of this year’s Hall of Fame speech. It exemplifies Buck’s charisma as he invited all of the attendees to hold hands and sing in unison (to Buck’s lead of course) to a hymn “the Greatest Thing”. He remarked, “See, I know my brothers up here, my brothers over there — I see some black brothers of mine and sisters out there — I know they can sing. Can you white folks sing?” Right then the camera panned to an awkward looking Bud Selig holding the hands of the people beside him.

The speech really was the greatest thing, quite moving as it touched on a wide variety of subjects, including the history of the negro leagues, love, hate and prejudice. As well Buck didn’t waste the opportunity by attempting to pick up any eligible ladies in the crowd! Most important of all, it came directly from the heart, and that is how I will remember Buck O’Neil.

Here is an mp3 of that very speech

and here is the transcript

The following is an excerpt from Wright Thompson’s article from ESPN.com, since I couldn’t have said it any better myself:

Buck O’Neil lived to see the white high school that wouldn’t admit him open its doors to all people. He lived to see the kids he scouted turn into Hall of Famers. He lived, as he liked to say, to meet presidents from Truman to Clinton (and he lived to huuuuug Hillary).

At the end, he’d lost his voice. That’s the unkindest cut of all. For his entire adult life, Buck gave his voice to those who could not speak for themselves. He shouted from the rooftops about a generation of ballplayers and the blighted part of American history they represented. He traveled around the world, telling their story; and, at the end, his voice was gone. Used up. He lay in a hospital bed and could barely speak.

When he didn’t get into the Hall of Fame this year, people rightfully howled. As the news reached him, a final denied dream in a life full of dreams denied, he just smiled.

“God’s been good to me,” he said that day. “If I’m a Hall of Famer for you, that’s all right with me. Just keep loving old Buck. Don’t weep for Buck. No, man, be happy, be thankful.”

On a day that should have been the pinnacle of a life dedicated to helping others, he showed up at the podium in Cooperstown anyway to help honor the Negro Leaguers who did make the cut, and he led the crowd in a song that will never be heard again:

“The greatest thing  in all my life  is loving you.”

He sang those words to the folks there and to those at home. Sitting here now, trying to imagine a world without Buck, I can’t stop thinking about that song. As a former reporter for The Kansas City Star, I had my share of interaction with Buck. I heard him make cynical school children stand and sing in loud voices. It’s clear to me now that knowing and loving Buck has been the greatest thrill in my professional life. It’s been a thrill for all of us who knew and loved Buck, either in person or in spirit.

We all marveled at this amazing 94-year-old man, at his incredible strength. He refused to follow life’s rules about aging. He traveled like a man half his age. He played golf right up until the end. He refused to stop telling the story of a league that America almost forgot.

“Buck’s fought in so many arenas, and we don’t see the scratches and bruises,” Negro Leagues museum executive Tonya Tota told me just before the infamous Hall of Fame vote earlier this year. “Buck reminds me of a stealth plane. They’re sleek and they’re beautiful, and you don’t know how much power they have inside of them. They just soar and they fly, and that’s Buck.”

Even though he wasn’t elected to the Hall of Fame, his speech served as a reminder to the world about his accomplishments. But it was his final role, as ambassador, in Ken Burns’ documentary about baseball and in countless rooms and auditoriums across the country, that defined him. He made America face its own painful history.

His speech in Cooperstown was the last time he played that role, and he nailed it. The crowd gave him a long ovation, and then he went back home.

Not long after, the years finally caught up with him. He checked into the hospital for exhaustion. Without the interaction that was his life, he felt like 94 for the first time. His voice began to falter. Kansas City had planned a birthday party for him, in November. All the women were asked to wear a red dress.

That was one of his many credos: Don’t ever let a woman in a red dress walk past without talking to her. That’s classic Buck. On the surface, it’s a funny little adage about talking to women. But, beneath, there’s some zen: Take your opportunities. It’s Buck-ese for carpe diem.

He didn’t make it to that birthday party, and all we can do is remember Buck today. Remember the things he talked about. That’s what he would want. For his voice, silenced at the end, to live after him. To teach the things he held dear: friendship, understanding, love. 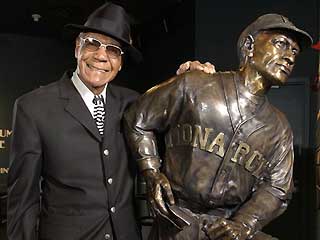