Before we get started, I’d like to get the following out of the way:

And with my little rant out of the way, onto my game notes/thoughts from April 23rd Dunedin Blue Jays vs Tampa Yankees, High-A Florida State League 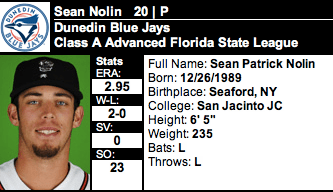 On this evening Nolin featured primarily a fastball and curveball. He mixed in a change during the first few innings but went away from the pitch in the later innings.

There were no radar guns on the scoreboard or even scouts with guns at this game that I could find. With that said, I’d estimate his FB to sit in the mid to high 80’s. He was able to dial it up when needed, which he tended to do in obvious FB counts or with two strikes. His curve appeared to be in the low 70’s, and he was able to keep it down in the zone. The curve was his primary strikeout pitch during this start.

Nolin’s control was stellar in-between the 2nd and 5th. He appeared flustered after an error in the 6th and started to unravel a bit, walking the next batter and allowing a base hit to the next runner.

Here’s a video of Nolin’s mechanic’s from a side view, followed by a behind home plate vid.

I tend to give lefties the benefit of the doubt. Sean is a big kid at 6’5 & 235. At this point he’s a very projectable talent that profiles as a back-end starter or long-mid relief in the pen. If everything falls into place & he adds a few MPH to his FB, he could (perfect world scenario) project as more of a 3/4 type of pitcher. 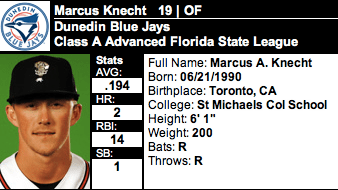 Perhaps my expectations were too high going in. I wasn’t overly impressed.

Marcus hit 3rd in the order. He didn’t seem sure of himself at the plate and was very passive. He didn’t swing with conviction.

He has a tweener body, which makes me question what his ultimate power/speed ceiling will be. I really don’t see more than a 10 – 15 HR out of Knecht at the MLB level.

In the field he was once again passive. In one instance he didn’t attack a ground ball into LF. The Yankees realized this and took an extra base on his arm.

Marcus’ arm has been scouted by others as accurate. It wasn’t on this night, as he doubled clutched a throw which lead to a throwing error and he also two-hopped a throw for mid-LF.

Outside of lightly hit balls, nothing of note was hit to his way in LF. With his speed grading out at average or a tick above, I think he profiles as a corner in the MLB. And can he hit enough to hold down a corner OF position in the show?

Maybe it’s a Canadian comp but Knecht comes across as a poor man’s Jason Bay. I would Marcus’ ultimate ceiling as a borderline starter for a 2nd division team or a 4th/5th OF type for a team in the AL East.

Then again, it’s only one game. 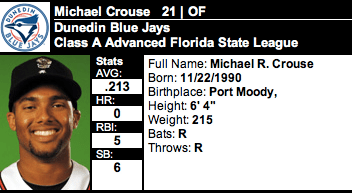 Crouse made a good defensive play in CF, running down a ball in left-center after shading the opposite way for a LHB.

He took a ton of pitches during his AB’s and seemed to have an idea when he headed to the plate. If anything, like Knecht, he may have been too passive.

Crouse stole 38 bags last season, so I was expecting him to be a burner. While he’s fast, he doesn’t set the world on fire. He’s an above average runner, that if I had to grade would be a 60-65, that I could see stealing 20ish bags in the show.

The 6’4 Crouse takes very long-stride, and looks like Colby Rasmus when running. Around 1:07 to the end of this video is footage of Michael running down the first base line.

Crouse is young and it appears that he can still add some muscle to his frame. Toolsy players such as Crouse typically develop power as they age (see Alex Rios & Grady Sizemore). If he puts things together, he could develop into a 20/20 type player. He could also flame out. A high risk/high reward type player, a welcome sight in the AL East. 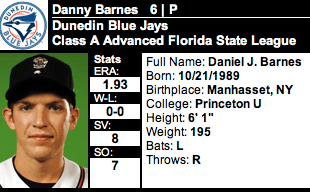 No nonsense, set and throw RHP relief pitcher with a good fastball and a sharp slider. Relief prospects rarely make noise in prospect rankings, which makes Barnes overlooked in most circles.

Once again, there was no gun present at the park. I would say Barnes brought his FB in the low to mid 90’s, which at times could sink and his slider would be down in the low-mid 80’s

Barnes will be an interesting player to watch in AA & AAA. His FB was able to overpower hitters down here in high-A. How will it play in AA+?

Here’s some footage from behind home plate of Barnes pitching to Yankees prospect Ramon Flores.

I wouldn’t be shocked to see Barnes rise through the system and end the year in AA. Where he goes from there is anyone’s guess. The Jays could have a serviceable MLB middle reliever on their hands, which is valuable commodity considering the teams propensity to acquire outside FA relievers at salaries far above the MLB minimum.

I’m pleasantly surprised with the level of talent in Dunedin. Crouse/Barnes/Nolin rarely crack top 25 in Jays prospect rankings and they all offer nice upside. In a perfect world scenario, the Jays could find themselves with a logjam of tradable talent in 2013/2014/2015, which would allow them to deal multiple prospects for valuable pieces to the MLB roster.