Today’s game between the Blue Jays and Atlanta Braves was an exciting one, and it began with the national anthem.  I don’t know if the Canadians in the crowd still have Olympic fever, but the past two games we have been treated to a rousing rendition of O Canada by the sing-along Canadian contingent in the crowd. 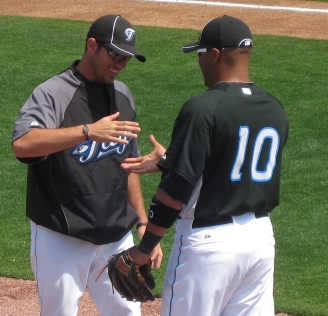 The game had two sinkerballers squaring off against each other, Atlanta’s Derek Lowe and Toronto’s Marc Rzepczynski.  While the pitchers were warming up and preparing for the game, Vernon Wells worked on his secret handshake.

The Toronto defense was tested right away on a short ground ball that Bautista charged hard for and then attempted an ill advised throw.  He sailed it over first baseman Lyle Overbay’s head, but who was there to back him up?  No, not John Buck.  Aaron Hill!  Even during spring training he is doing the right things, exhibiting hustle and doing the little things that go unnoticed but are crucial to helping a team win at the big league level.

Unfortunately the defense wasn’t all good.  Adam Lind was a calamity of errors out in left field.  He couldn’t throw, he couldn’t catch, he took awful routes to the ball – just a bad day for the golden child.  He really has no business being out there even though it is hard to see a young guy like Adam with so much upside be relegated to a DH role.  He won’t be playing 1B though anytime soon with Brett Wallace and Randy Ruiz knocking down Lyle Overbay’s door. 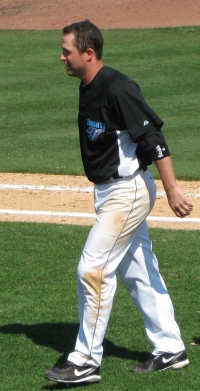 Since he wasn’t starting, fan favourite John McDonald took some time between innings to acknowledge the fans.  Johnny Mac is easily the most popular Jay here in spring training and he gets the loudest cheers of any player at Dunedin Stadium. I’ll talk more about the Prime Minister of Defense later, as he became an integral part of this game.

Travis Snider keeps surprising me with his cannon of an arm in outfield.  Reports of his defensive demise have been greatly exaggerated. He almost threw out Yunel Escobar stretching a single into a double, and Yunel is no Bengie Molina.

Jose Bautista hit the ball hard all game long.  It is only spring training and all, but it is still a very good sign.

Aaron Hill has picked up where he left off last season and even from the previous game.  He is hitting the ball with authority and took Derek Lowe deep early on – a line drive shot into the trees over the left field wall.

Chad the Beer Guy was up to his old tricks again.  I have some footage below of a Vernon Wells at bat narrated by Chad.  I found out some interesting information about Chad – he sells beer in the stands part time.  His day job is as a DJ at a local Tampa radio station.

Speaking of being up to old tricks, Valerie graced us with her presence yet again today.  Due to popular demand I recorded a little bit of Valerie’s schtick.  Don’t get your hopes up, I didn’t want to be a creeper so the clip is short.  However, my attention span when it comes to Valerie is not.  I could listen to her force drunken Jays fans try on frozen t-shirts all day long. No, really.  As one commenter said, she is magical.  Judge for yourself at the end of this post. 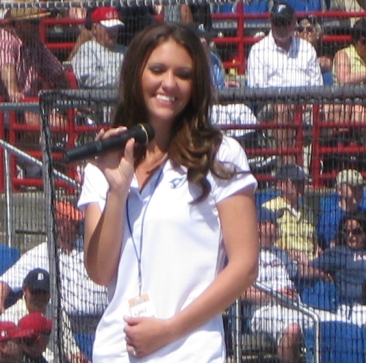 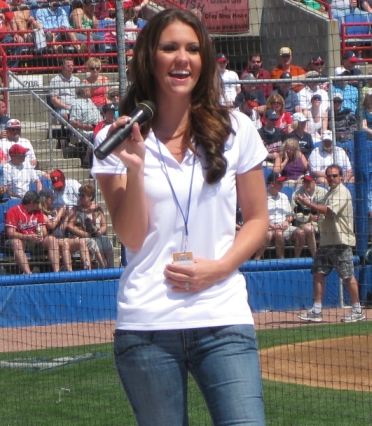 Shawn Camp came on and executed a classic old time pitching move.  Melky Cabrera was leaning over the plate and camp threw him some chin music.  Next pitch was a breaking ball that painted the outside corner for strike 3.  It reminded me a lot of Pat Hentgen.

Nate McLouth is a little guy.

Scott Downs is in midseason form.

Kevin Gregg looked sharp, albeit against minor leaguers.  His 3 hits allowed were lucky.

In the 9th inning the game got really good.  The Jays were down 5-4 and Johnny Mac knocked in the game tying run (footage below!). Clutch! In the 10th the Braves took a 6-5 lead.  Ryan Shimpf led off with a single, Joey Gathright followed that up with a single and then pinch hitter Michael McDade (from the single A Lansing Lugnuts) hammered a pitch off the CF wall to win the game. Go Jays!!

Other thoughts: Henry Blanco is fast as hale.  Matt Diaz is a free swinger, to his detriment.  Ryan Shimpf plays all out.  Speaking of playing all out, I neglected to mention Adam Calderone playing in the AAA game yesterday.  He ran out every flyball, grounder, foul and he has good speed. I hope he keeps it up, even if he didn’t get on base he was fun to watch.  Now, on to the videos:

Eric Hinske at bat.  Wanting to say failing at life but he proves me wrong.. here, anyway. The best is the woman a few rows behind me yelling at me to let it go, Hinske’s time with Toronto was years ago.

More Chad the Beer Guy and a Randy Ruiz double.

Chad the Beer Guy leads the crowd in Take Me Out To The Ballgame.

Johnny Mac ties up the game.

Journey and Merkin Valdez.  A match made in heaven.