For my final game in Dunedin, I took in an afternoon tilt between the Toronto Blue Jays between the Detroit Tigers.  For Detroit, lefty Nate Robertson toed the rubber while Brian Tallet countered for the Blue Jays.  I mean what I say when he woke up on the wrong side of the bed – he was terrible.  Tallet gave up five runs on eight hits over five innings, with one walk and one strikeout.  Even more telling was the audible grunting he was making with each pitch.  The last time I heard similar grunting was from Tigers reliever Scott Williamson – who was released shortly thereafter.  Now I am not saying Tallet is on the fast track to being released, but it bears watching.  He could be fatigued or actually hurt.  I expect him to hit the DL and if he doesn’t, well… he is in for one terrible season.  Tallet was torched for a 3 run home run from Brandon Inge who absolutely crushed the ball.  It was a fat, tasty meatball down broadway running at about 80mph.  Flyballs were the norm for Tallet today, which was a little disconcerting.  Ryan Raburn also smashed one over the wall.  An ugly outing through and through.

One bright spot though was, of course, Randy Ruiz.  He put a charge into one ball and according to Jordan Bastian, he had a bit of a Sosa-hop.  I didn’t see it myself, but I like it.  Pimp those home runs Randy!!

Randy Ruiz launched a mammoth two-run homer in the second inning of Monday’s game. He did what looked like a Sammy Sosa-style hop out of the batter’s box, before dropping the bat and trotting around the bases. “Nah,” Ruiz said with a smile. “I just didn’t know if it was going to hook foul or not.” Well, in that case, it was more of a Carlton Fisk-type hop.

It was at this time that Mop Up Duty reader Karmen introduced herself to me at the game.  Karmen had flown in from Alberta to catch a few spring training games with her father.  A die-hard Roy Halladay fan, she was able to get a scrap book she made of pictures she took of Roy during his starts through Brandy Halladay at Bright House Field, along with a thank you note to Roy for his time in Toronto.  A great Jays fan, through and through.  Nice to meet you Karmen! Thanks for the beer!

In the top of the 2nd inning the lovely Valerie asked me if I wanted to take part in some trivia.  I said “of course!”  The question was incredibly difficult though. It was “when did Bobby Cox name Cito Gaston his full time hitting coach? 1981, 1982 or 1983?”  I guessed 1983 but I really meant 1982 and Valerie could see it in my eyes.  Not that I really knew the answer – I was only 2 years old at the time.  I won a $10 gift certificate at the Tilted Kilt in Clearwater for taking part.  Thanks Valerie!

Josh Roenicke came on in relief of Brian Tallet and had some struggles of his own.  He threw a lot of pitches; in other words he didn’t have command of the strike zone.  He sat around 93mph.  He gave up a long fly ball to Austin Jackson that was just out of the reach of Joey Gathright.  Joey actually might have had a chance at it had he not had such a poor jump on the ball.

Speaking of bad jumps – #32 for Detroit, Don Kelly, had an absolute horrible read on a fly ball and took a helter skelter route to the ball.  He had no chance, and based on that play I am shocked he is in CF.

I believe that control issues have plagued Roenicke all spring.  I hope he is just working on some stuff and will have the kinks worked out by opening day.  He did throw a beautiful 76mph breaking ball to strike out Ryan Raburn – it almost made him jump out of his skin.  In my mind it is between Roenicke and Accardo for the final bullpen spot.  Accardo came on today and looked sharp.  To me, Accardo has the inside track at this point.

One man who knows all about control issues is Dontrelle Willis.  Surprisingly, he looked very good today.  He was hitting his spots while working between 89-91mph.

Later on in the game the score was 8-2 for the Tigers and things were looking bleak.  One of the vendors was screaming “lemonade, peanuts, water… razorblades”  Lucky for me I was sitting near some gentlemen who were from Michigan. They were enthusiastic Tigers fans and big baseball gans in general.  Of course we had to talk about Frank Tanana in 1987! I’d like to give  big shout out to Eric and Bill.

They were pretty happy to see new Tigers closer Jose Valverde come on in relief.  Up first was single-A SS Ryan Goins.  He didn’t stand a chance.  Valverde struck him out with 96mph smoke.  Following Goins was 2B prospect Brad Emaus.  I was impressed with his approach – he hit a nice line drive to CF.  However the Jays could not mount a rally.

Casey Janssen came into the game at this point and had a nice pitch sequence against Deik Scram.  Casey was sitting at 86/87 with his fastball and then dialed it up to 92 to striked Scram out.

That’s all the news that’s really fit to print about the game.  Not the best performance by our boys in blue that I have ever seen but it is still…. SPRING BASEBALL!  I can’t wait for opening day, as well as our Mop Up Duty Meet Up/Tweet Up (confirm your attendance now!)

Oh yeah, one other thing.  At the end of the game I was talking with Karmen and… guess who walked by?

Karmen and I said hi and I told him that I loved the plan and to keep up the great work.  He thanked me and said he appreciated it.  Lets see if he still appreciates it in 5 years when he doesn’t have a playoff appearance to his name and I turn on him like a rabid dog? Just kidding. Maybe.

Also, remember the Blu-Blocker Guy from last year? Well he was back again with an updated pair of shades!  I love seeing dedicated fans like him. 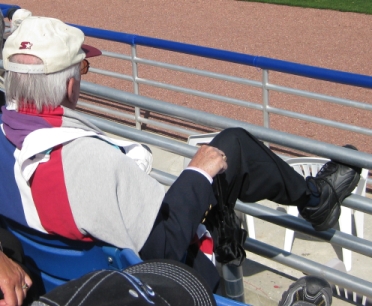 Below are some random pics from the game, followed by a sort-of review of the Tilted Kilt. 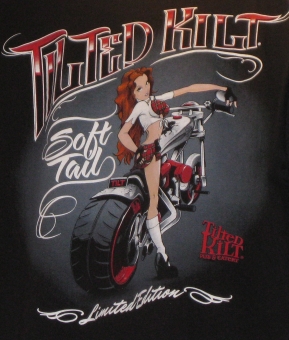 After the game I rolled into the Tilted Kilt for some Yuengling with my gift certificate.  It is wildy popular due to its proximity to Bright House Field (across the street) and its attractive servers (wearing short kilts).  The beer was good, the garlic fries were tasty but the wings were all drummettes and no flats.  Disappointing.  But the servers were nice to look at so I recommend this place to everyone who is in to that sort of thing. 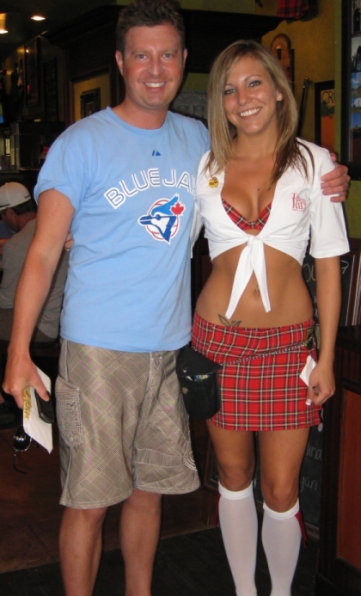 I try my hand at O Canada…. not good. Must be the acoustics 😉

Brian Tallet gives up a base hit.

Someone needs a little more PFP…