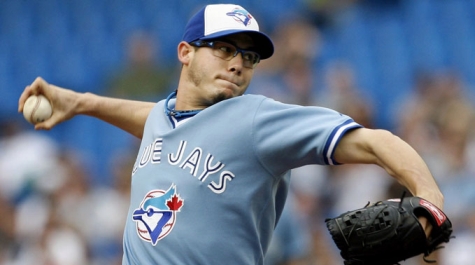 I have followed Dustin McGowan’s career ever since he was drafted in the first round of the 2000 draft by the Blue Jays.  Ever since baseball writers routinely misspelled his name (“Magowan”) while describing his electric stuff.  He was one of those players who had a great arm but couldn’t trust his pitches and nibbled the corners without having pinpoint control.  He finally began to put it together during a stint in the Arizona Fall League and became a fixture in the Jays rotation in 2007.  Under the tutelage of pitching coach Brad Arnsberg, McGowan began to trust his stuff and showed flashes of brilliance – but also bouts of inconsistency.  Regardless he finished with a strong campaign and ended up pitching ~ 170 innings. 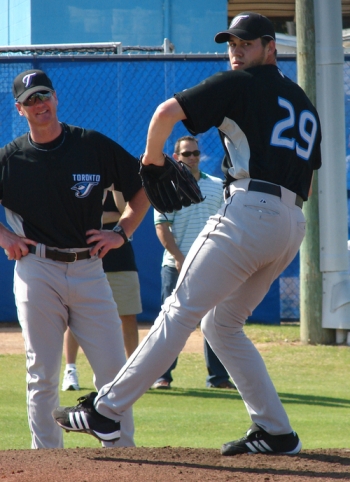 The Blue Jays were expecting big things from McGowan in 2008 and going forward.  However, the best laid schemes o’ mice an’ men gang aft agley.  That is to say, after pitching with a partially torn rotator cuff for part of the season, McGowan removed himself from a July 8th start against Baltimore because of pain.  He had surgery to repair a torn rotator cuff and frayed labrum July 31st.  He was expected to return to the Jays rotation by May of 2009. 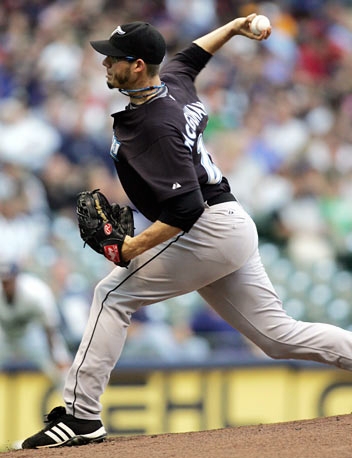 What was that about best laid plans?  McGowan, who is a diabetic, took a lot longer to heal than expected.  He experienced prolonged soreness in his shoulder as trainers worked him over with deep tissue massages to try to break up the scar tissue.  Just as it looked like McGowan was making progress, he tore the cartilage in his left knee during routine running drills.  He had surgery on the knee July 9th.  “I feel bad for the poor kid,”  then-GM JP Ricciardi said. “He can’t stay healthy.” 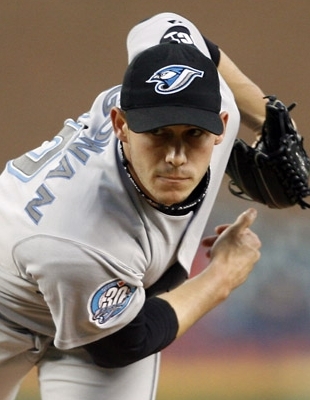 Near the end of the season it was reported that McGowan was progressing well and was throwing from flat ground at 115 feet.  According to then GM JP Ricciardi, he was “letting it fly” and is “feeling great.”  Then came some unsettling news from the Blue Jays’ excellent beat writer, Jordan Bastian. 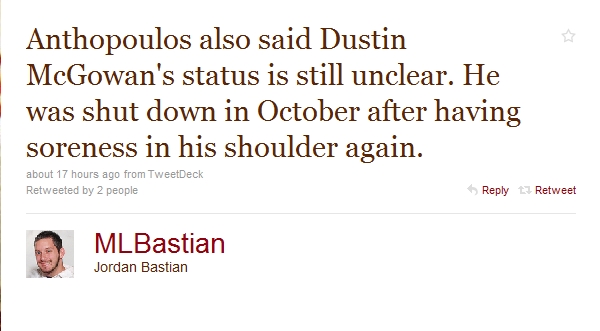 This is not good news at all, obviously.  The optimist in me says “no big deal – it is probably just more scar tissue being broken up, he’ll be fine! All part of the recovery process!”  But the realist in me, having been down the road of Mike Sirotka before, wonders if his career might be over.  You know, JP’s little comment about “feeling bad for the poor kid” and not being able to “stay healthy” is eerily similar to that of Padres pitching coach Bud Black regarding Mark Prior. 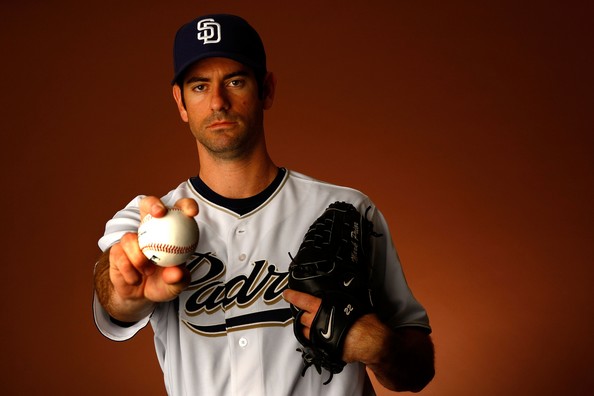 For those of you who may not remember Mark Prior, he was the saviour of the Chicago Cubs pitching rotation.  However, Prior hasn’t pitched in the big leagues since Aug. 10, 2006, while with the said Chicago Cubs.

Prior is trying to return to the the Major Leagues after two surgeries to his right shoulder, the first in 2007 by renowned orthopedic surgeon Dr. James Andrews to repair a 180-degree tear of his labrum as well as a split of the shoulder capsule.

Then, on the heels of a year-long recovery and rehabilitation program, Prior suffered a serious setback when he tore the anterior capsule in his shoulder, a gruesome injury of sorts that saw the capsule tear away from the humerus bone. He had surgery last June.

He returned to the Padres on a minor league deal but was shut down after reporting soreness in his shoulder in April.  This past August, Prior was released by the San Diego Padres after showing little progress in his rehabilitation. The quote from Bud Black? “The poor guy just can’t seem to get over the hump. He is doing everything possible for him to come back. … I hope it works out for him.”

The Mark Prior story hasn’t finished just yet as he announced the he would throw for teams this spring.  But having that kind of major surgery on a shoulder multiple times and not having pitched against live hitters since 2006 does not bode well for the former Cub phenom.

Doom and gloom aside, there is one pitcher who has bounced back from multiple shoulder surgeries to find Cy Young form.  That pitcher is former Blue Jay Chris Carpenter. 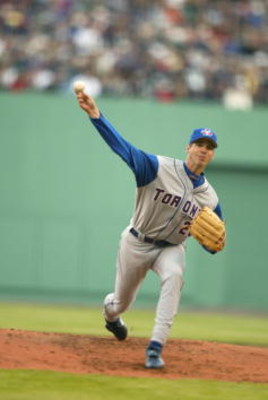 Carpenter, like Dustin McGowan, took a little time in developing into the pitcher scouts and fans thought he could be. Again, like McGowan, he began to show flashes of brilliance before a shoulder injury threw a wrench into his and the Blue Jays’ best laid plans.  Late in the season of 2002, Carpenter went on the disabled list with the same injury as Dustin McGowan – a torn labrum.  He remained there for the rest of the season as he had shoulder surgery in September.  At the end of the season, the Blue Jays removed Carpenter from the 40-man roster and GM JP Ricciardi offered him a low-ball minor league incentive deal, which Carpenter refused, allowing him to become a free agent.  The St. Louis Cardinals signed him and the rest is history. A history that includes 2 All-Star selections, a Cy Young award and a World Series ring. 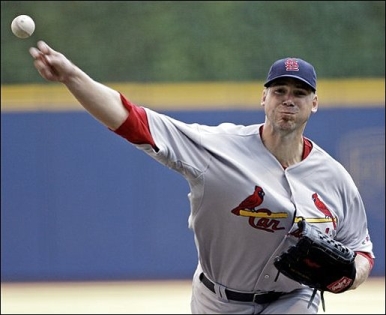 I like to play the game where I picture a Blue Jays rotation fronted by a double headed dragon of Roy Halladay and Chris Carpenter if Carpenter had only stayed with the Jays.  Apparently I am not the only one.  More unsettling news in (former Assistant to Jays GM JP Ricciardi) Keith Law’s latest chat.

Yikes.  Apparently Carpenter HAD to go to St. Louis in order for him to find the form that made him a Cy Young award winner.  Considering Carpenter had the exact same injury as Dustin McGowan, I sure hope that the Blue Jays performed the correct shoulder surgery on Dustin this time.  If not… well…. let’s not go down that road yet.

So what do you think? Will Dustin be the next Mike Sirotka/Mark Prior? Or did the Jays learn their lesson and give McGowan the right surgery? Is it just diabetes holding his recovery back? I suppose we will have to wait and see as the conclusion of this story writes itself in the coming seasons.

Update on McGowan from Jordan Bastian:

“He was doing great before we shut him down for the season,” Anthopoulos said. “He was rehabbing, but like you saw in the summer, he was doing very well with his rehab and then when he got to the mound throwing [in the middle of October], he had some tightness in his shoulder again and we had to shut it down. It’s one of those things that we’re going to have to continue to evaluate and continue to talk to our doctors and so on. We’ll see how he does. Right now, it’s more of an unknown.” 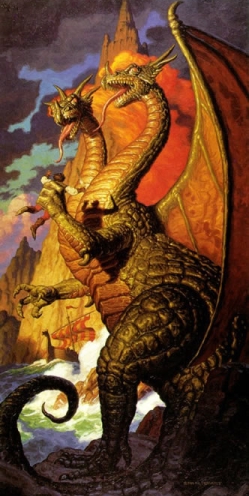