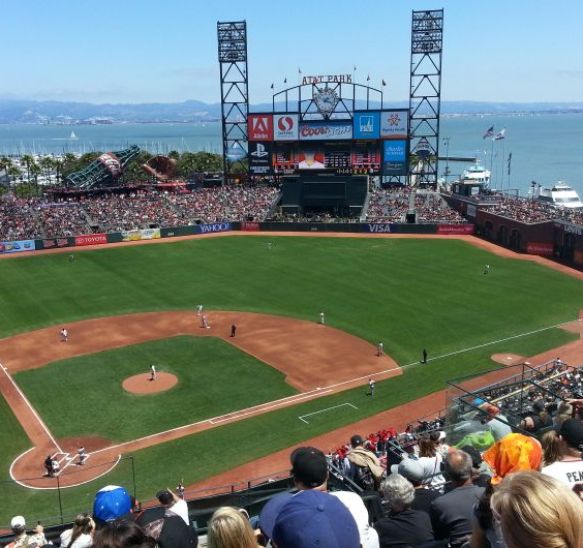 I finally made it to a California ballgame.  Unfortunately it was National League.  I will try to keep this to a ballpark review rather than commenting on the game.  As this is a Toronto based blog and many of the readers are familiar with the Blue Jays I like to use Rogers Centre as a baseline or reference for my ball park reviews.

This was my first trip to San Francisco.  My hotel was located in the Union Square/Chinatown neighbourhood.  From here it was an easy walk to the ballpark.  I didn’t need it but I saw that parking in the area was very expensive, with most lots asking $30.  The San Francisco underground has a couple stops that make the park easily accessible to the rest of the city.  The Embarcadero streetcar also has stops close to the park.  This situation reminded me of the RC as it does not restrict fans accessibility to the ball park.   The park is also walking distance from the Ferry terminal.  Giant fans also can take the ferry from other Bay Area communities and avoid the commute.  Very unique!

The walk to the park is pleasant and easy.  There are museums shopping opportunities and many restaurants and bars.  As you get closer to the field more and more fans on foot join the jaunt.  I noticed very few scalpers and none on the block the park is on.  I wouldn’t consider the area around the park a “ball park neighbourhood”.  San Francisco is not a city that has extensive suburbs and there is no urban renewal that many of this newest wave of ballparks led.  San Francisco downtown is vibrant, people live, work, play and shop in the city, much like Toronto.  The restaurants and bars in the area would be able to support themselves without the Giants playing around the corner.

When you come to the ball park it is a small park but is a solid and imposing structure.  It reminded me more of a classic hockey arena than a retro ballpark.  The solid red brick construction does not give fans on the street a view to inside the park.  This is different than what I have seen in Detroit, Cleveland and other retro style parks where there is an open theme, giving the impression of several building put together.

Attached to the stadium are two bars, the Public House and Mijito.  Both are overpriced but very fun and lively.  This is what the Hard Rock Cafe could have been!  The Giants Souvenir shop is next door.  They sell all Giants gear with some Seals gear mixed in.  The Grateful Dead logo with GIANTS emblazoned over it is popular and an eyesore.

I purchased tickets walk-up.  The line was short and the ticket agent was sincerely helpful and friendly.  I don’t think the Giants get many walk-ups.  They sell out games alot and I am sure they presell many seats.  Prices are very high compared to anywhere else I have been.  For $31 you sit along the third base line about 8 rows up in the upper deck.  There is some cheaper seating the in bleachers and the corners of the upper deck but these are very limited and were sold out.  If you are looking for a great value ticket, this is not the place.  The Giants use a dynamic ticketing price which brackets the price of tickets and then they will move with demand.  This is a good idea but since the demand is high, I think it will artificially paper the crowd by luring cheapskates into lower demand games.

The park’s name, AT&T Park, is not generally used in San Francisco.  The park opened in 2000 and has had three name changes along with SBC Park and Pac Bell Park.  Perhaps AT&T will stick and develop into a more stable name but everything from the fans and even the tourist guides and transit maps identify the park as Giants Ballpark (AT&T Park).  Transit signs direct fans to “Ballpark” or “Giants Baseball”.  I realise that classic parks and even the stadiums that I grew up with had different names but everyone knows Comiskey Park, Candlestick Park and that the Rogers Centre will never be the civic symbol of Toronto that the SkyDome was (is).

But let’s not judge a park by its name.  AT&T is unique in its location on a large body of water.  This is not totally present from the street but anyone is conscious of the water in SF.  You can enter through the main gate “Willie Mays Gate” there is a large statue of the Say Hey Kid outside the namesake gate.

The ramps and elevators are inside and have the open steel cantilever gimmick that many parks have now.  The club concourse is enclosed and seems it is probably climate controlled.  The upper deck concourse gives spectacular views of the city and the Bay Bridge.  I attended an afternoon game and the park was bathed in bright sunshine.  The upper concourse has any type of food you can think of.  San Francisco is a very cosmopolitan city, and like Toronto, it is reflected in the ballpark fare.  You will not get the Americana food selection of red hot, frankfurter, kosher or footlong that some stadiums offer.  Here you can get all the above or any ethnically named sausage that you can imagine.  You can get Mexican food, gourmet ice cream or normal ice cream.  I even saw a sushi stand.  Like all ballparks, food is expensive.  The AT&T experience, as a trend, is expensive.  The concourse also shows pictures and stories of great moments in Giants history and great baseball quotes.  The Jays could incorporate this.  A giant mural of Jose Molina in the concourse just doesn’t get the same generate the same interest.  There were a few small tv’s in the concourse.  If you are standing in line or moving around between innings it is hard to follow what is happening on the field.  The Jays always have Jerry Howarth blasting in the concourse and in the washrooms. 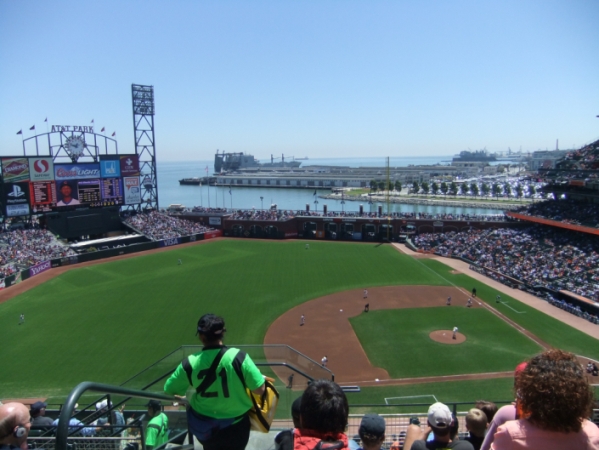 Once you walk into the seating area you are over taken by the vast blue Bay that really the only visual that you get.  The hills across the bay are very distant and giant freighter and tiny sailboats slowly come into detail once you take it all in.  The sightlines are good and there is something in the pitch of the upper deck that made me feel that I was hovering over the field.  The scoreboard is huge, colourful and full of data that would make the novice and the student happy.  I could not see a pitch count or speed clock anywhere. 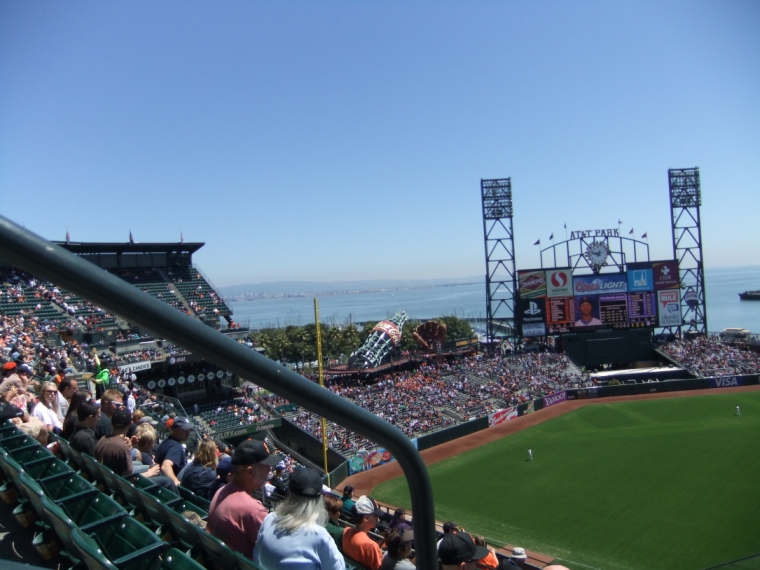 The grandstand layout reminded me of Cleveland but I noticed the leg room is poor.  Also, there is one entrance per two or three aisles.  I have seen this elsewhere and I find that there will be railing obstructing the view.  This was not the case in my seats but there were some seats that had this.  This, I feel is a design flaw and I do not know why the one tunnel per aisle ratio isn’t an industry standard.  This was amplified by how much people move around during the game.  All the distractions and variety on the concourse must make people need to go every other inning.  Also, there are so many hockers trying push garbage food and drinks it is distracting.  And again, not once was there a beer guy in the aisles.

Between innings the Giants had funny and real fan contests.  If you win you get a Giants cap!  Much better than $5.00 off you next Purolator purchase like at the RC.  There is a small field for kids to play at beyond the left field bleachers. 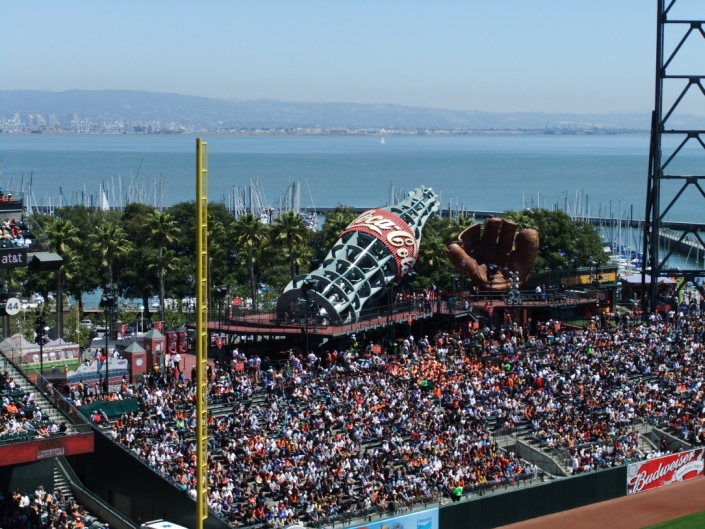 My Giants experience was sun soaked but the location on the bay makes it notoriously chilly at night.  San Francisco in general experiences a very moderate temperature and fog often rolls in during the afternoon.  Giants’ fans are casual and quiet.  The bay area in general is probably not large enough to support two MLB teams.  However, there has been a struggle between the two for 40 years now.  It seems to me that the Giants fad has caught on and the A’s are now ready to look to move further away from the Giants.  If the A’s had not been so successful, 4 World Series, 6 AL Pennants, 14 West Championships and 2 Wild cards in 42 years compared to the Giants 2 NL Pennants and 4 other playoff appearances and no World Championships in the same period.

Also while in San Francisco, you can see Candlestick Park, still used by the NFL 49ers.  It is well to the south of the city closer to the airport.  Also, SF legend Lefty O’Doul has a bar near Union Square.  It is a must for any ballfan visiting; the posters are blown up photos from private collection or other notables, such as a USO ID of Norma Jeane DiMaggio!  DiMaggio is also a SF legend.  I went by the Joe DiMaggio North Beach playground and there is also a Joe D. Chop House that I didn’t go to.  Also, if you venture to Alcatraz Island do not hesitate to go out into the recreation yard.  The backstop and infield base paths are still worn down.  It is so windswept and exposed it is a testament that it has not eroded completely. 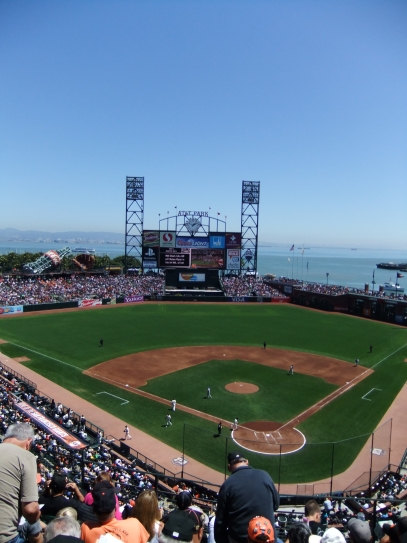