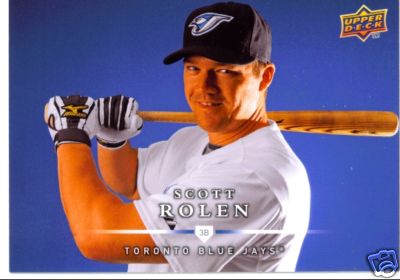 Now and in the Recent Past

Looking back at a variety of 2007/2008 off-season news and blog articles, it appeared that the Jays finally got what they needed, a “prototypical” leadoff man with speed in David Eckstein. We’ve seen how that worked out. Ok, so now what are the current options?

With the return of A-Hill, the low slugging yet higher OBP of Joe Inglett is back to the bench. Aaron Hill and Alex Rios always have lower than desired OBP (.330 ranges) and Scutaro doesn’t slug (.359) nearly enough to warrant a position in the order that yields extra plate appearances. If the Jays don’t acquire someone for the role then they should really give Scott Rolen a chance at the leadoff batting position for the 2009 Toronto Blue Jays.

We all know that Rolen’s no longer a HR threat, so the overall experiments of using him in the three and four holes is largely a thing of the past. Towards the latter half of the season the Jays began using Rolen way back in the six-to-eight spots in the order. Bottom line? He’s no longer counted on as a serious run producer for the ballclub. This leaves us with a serviceable player with a large contract (ie he’s staying) that’s main offensive strength is getting on-base.

Outside of an inning lead-off situation, Rolen posted an OBP .339. This is far lower than the leadoff .394 OBP.

Rolen’s career OBP in the leadoff position is .370, the same as his total career .370. Obviously his production has declined across the board, and most notably in the slugging and home run department. Jumping back to 2007 his OBP leading off an inning was again higher than his non-lead off plate appearances. The same goes for 2006. Three years in a row could be seen as the beginning of a trend.

With a decline in slugging percentage and the lack of a realistic second option, the Jays should really look hard at making Scott Rolen their leadoff hitter in 2009.