On April 16, 1989 the Blue Jays pounded the Kansas City Royals 15-8 at Exhibition Stadium.  But this was not your run-of-the-mill pounding of the Kansas City Royals.  On this date Kelly Gruber became the first Toronto Blue Jay in franchise history to hit for the cycle (a single, double, triple & home run all in the same game). 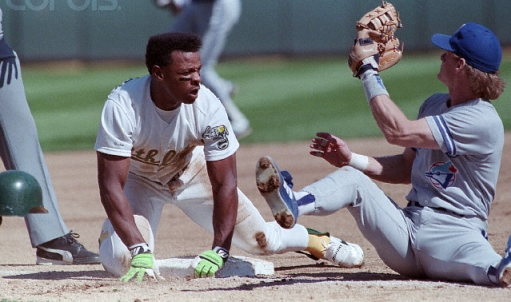 Of course, there is more to the story than that.  The previous day the Jays were spanked 10-5 and were still licking their wounds from the loss.  Kelly Gruber hit a home run in the first inning.  As he headed for home plate, he smirked at his counter part – third baseman (and current hitting coach) Kevin Seitzer. “Big deal,” Seitzer said and he laughed as Gruber rounded the bag.

After doubling in his next at bat and then advancing to third, Gruber mumbled something that is not repeatable – to suggest that the shoe was on the other foot this day.  Seitzer continued to laugh it off.

After tripling in his third at bat, Gruber stood on the bag and looked at a pissed-off Kevin Seitzer:

“I’m watching him – and he’s peeved.  So would I be.  I admit I probably was doing it in spite for pasting us the day before.  So after I slid into the bag, he comes over and says, ‘Well, I guess all you need now is a single.’  Now I’m peeved.  This whole time, he hasn’t said a word to me.  And with each hit, I’ve seen his mood change.  I’ve had a heck of an afternoon and this is all he can think to say to me? Three hits aren’t enough?”

“Well, I ended up scoring and I’m on the bench, still a little hot over what he said.  And it hits me. Home run, double, triple… single! Geez, it took me long enough!  If it hadn’t been for him reminding me, I might not have hit for the cycle.  Inspiration? Hell no!  The single I hit the next time up might have been a double any other day.”

Watch the footage below and you can judge for yourself:

That was the first time in the franchise’s then-13 year history that any player had hit for the cycle.  Gruber netted 6 RBI on the day in helping the team rally from a 6 run deficit to win.  There was much debate following the game as to whether Gruber’s 8th inning single should have been a double had Gruber not stopped at 1B.

“That was the toughest at bat I can remember having.  Anytime you have to come up there looking for a single, there’s extra pressure. Do I go for two if I have the chance? Or do I stay on first and look silly?” 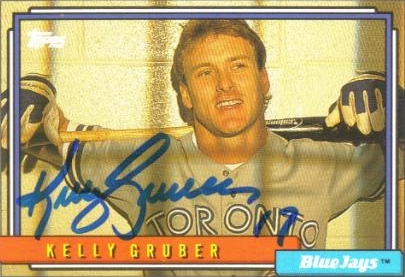 In a twist of fate, Kelly Gruber was in attendance when the second player in Blue Jays history hit for the cycle.  The date was August 17, 2001 and a struggling utility infielder named Jeff Frye got the start against Darren Oliver of the Texas Rangers.

“When a guy who is hitting only .219 coming into the game hits for the cycle, I guess it was meant to be,” said Frye, making his 43rd start this season. “I don’t know what to say I’m speechless right now.”

Like Gruber, Frye hit a long single in the late innings to complete the elusive cycle.

With a full count, Frye hit a liner to the gap in right-centre field for what should have been a double. After rounding first and looking at coach Garth Iorg for advice, he trotted back to first base and received a standing ovation.

“Before I went up there I asked (Jays hitting coach Cito Gaston) what I should do if I hit a pitch like that,” said Frye.

Gruber came on to the field to congratulate Frye for the accomplishment, but had a little fun with him before hand.  Gruber pretended that he was going to slap him instead of congratulating him and then the two players embraced.

“I wasn’t going to hug him, I was going to slap him,” Gruber later said on the CBC Blue Jays telecast. “I had a lot of flashbacks.”

It was 12 years after Gruber had hit for the cycle originally. 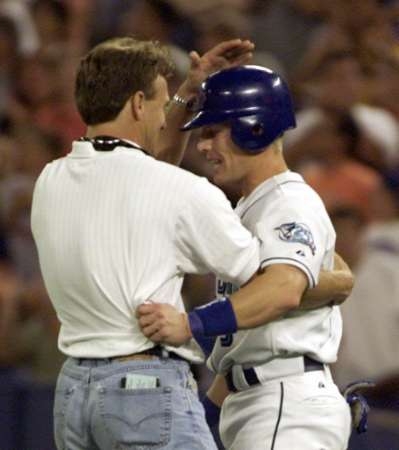 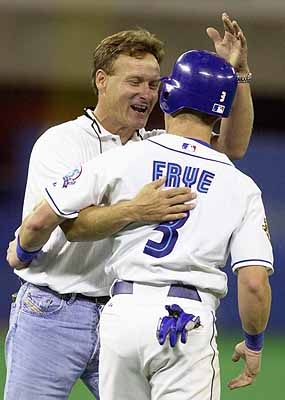 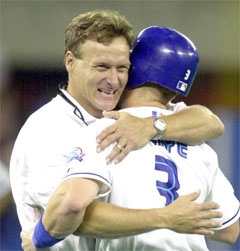 For more information on Kelly Gruber, check out our in-depth profile of the former Blue Jays third baseman.