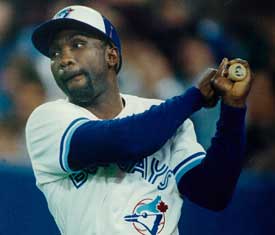 Mookie Wilson was traded along with Lee Mazzilli from the New York Mets to the Toronto Blue Jays on July 31, 1989 for Jeff Musselman and Mike Brady. Mookie ended up playing 2 and a half seasons in Toronto which was more than enough time for him to become a fan favourite.  In 1990, Mookie belted a career high 36 doubles mostly because of his blazing speed on the basepaths and overall hustle.  Casual fans were confused when Mookie came to the plate as enamoured Blue Jays fans would cheer “Moooooooooooooookie” which sounded as though they were booing him, when in fact it was the opposite.  In fact, no player became so popular so fast.  Mookie Mania had a firm grip on Toronto.

Mookie was instrumental in the unprobable playoff run that the 1989 Blue Jays made.  In the month of August, Mookie hit safely in 14 straight games with an average of .460.  The epic game that Mookie was involved in was September 30th, 1989. Before 49, 554 screaming fans, Wilson scored the go-ahead run in the 8th inning that ended up being the winning run for the Blue Jays to clinch the AL East division. 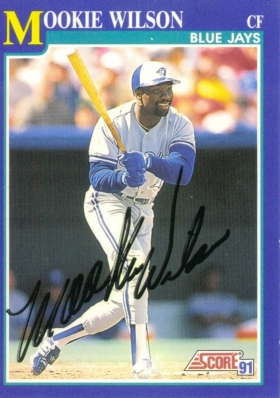 Since you came to town you been playin’ way out of your head
You can believe or not (?) brought to life a team that was dead
Well oh Mookie you look so fine (look so fine)
The way you move it on down that line
You gotta help us Mookie, help us make the Jays number one!

Well there was nobody arrived, just a player to be named yet
(Moo Moo Mookie)
We’re get together, send a Christmas card to the Mets!

Well oh Mookie you caught our eye
When you first caught a fly
You gotta help us Mookie
Help us make the Jays number one!