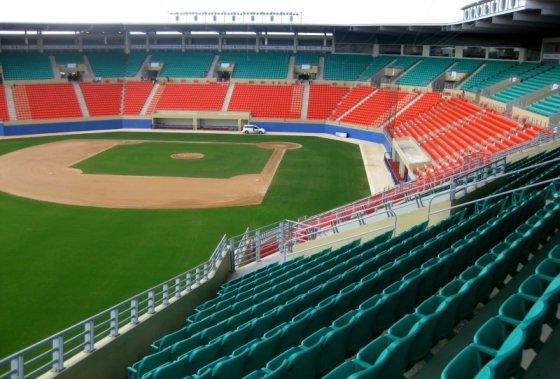 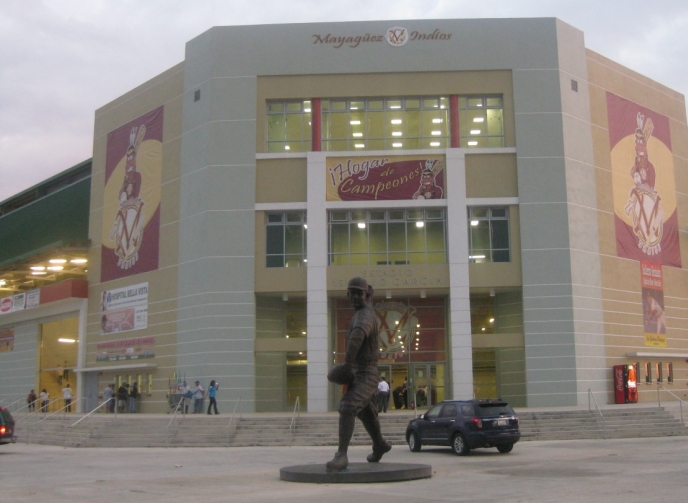 The locals refer to the stadium as “El Cholo García,” since the ballpark is named after Isidoro “El Cholo” García, the first Puerto Rican baseball pitcher to ever throw a no-hit no-run game in the island.   An imposing figure of Garcia stands  directly in front of the ballpark.  As far as statues are concerned, the Puerto Ricans know how to do it right.  This one is positively Herculean: 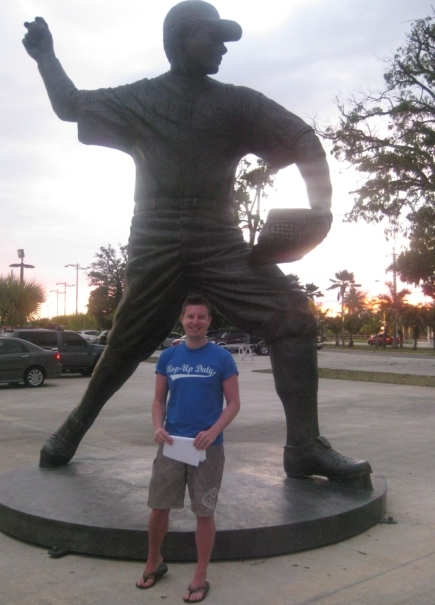 The Puerto Ricans have followed the trend in the United States of building baseball parks beside football stadiums.  Only in this case, it is futbol.  The ballpark is conveniently located next to the new Mayaguez Athletics Stadium and shares the same colour scheme and design traits as its neighbour.

The original “Cholo García” was a multi-purpose stadium, but was demolished after the 2006-2007 Puerto Rico Professional Baseball League final.  The ballpark was rebuilt from the ground-up at a cost of $46.8 million dollars. Upon opening, the stadium was used as the main facility for staging the 2010 Central American and Caribbean Games.  Estadio Isidoro Garcia went on to host baseball’s 2011 Caribbean Series.

The new Isidoro García stadium is fresh and clean, though it leans a little too heavy on concrete in its design.   The concourses are a deluge of grey.  But also good music.

As a baseball-only stadium, the sightlines are terrific and all 10,500 seats are angled toward the field.

The seating is structured similar to that of Wrigley Field, where the seats jut up against a wall that is very near the right and left field foul lines.  This is where you would find the Puerto Rican Steve Bartman lurking. 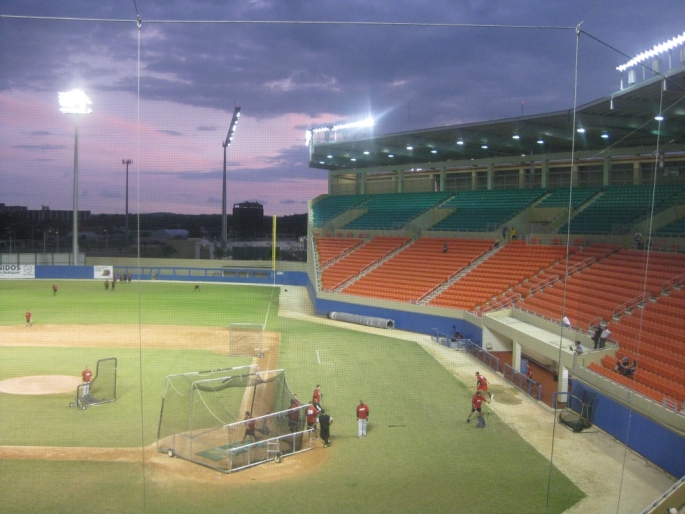 There isn’t really much of a view over the outfield fence.  A few hills and winding roads but not much to look at.  With that said, Estadio Isidoro Garcia is located right on the ocean and beside Parque Litoral – a great place to watch the sunset before heading over to the ballpark for a night game. 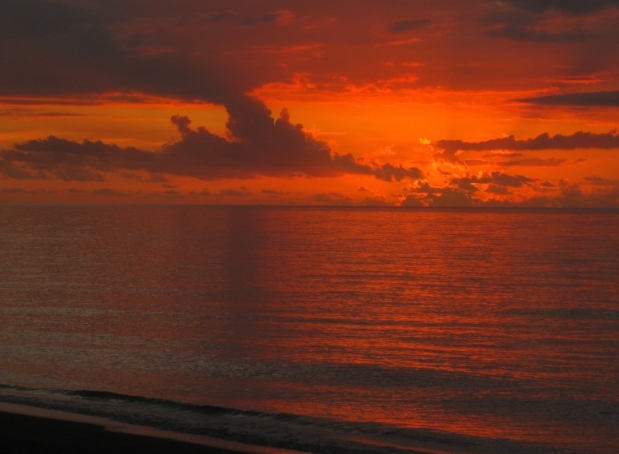 Food options are limited: pizza, hamburgers, cold french fries and greasy pastries stuffed with ground beef. Medalla Light is the only beer that is served, most likely due to sponsorship issues. Mixed drinks and piña coladas can be had both in the stands and on the concourse.

There is no party zone near the ballpark.  The neighbourhood is primarily residential.

There is no team store; a limited number of shirts are available from the box office on game days.  On the day I attended, no merchandise was for sale.

Overall, Estadio Isidoro Garcia is a world-class ballpark, but is just a little too white-bread and bare-bones for my tastes.  There are no quirks,  the field is symmetrical and nothing points to the Indio’s storied baseball history and tradition.  At $46.8 million dollars, I expect a lot more – especially when there are countless Latin-American ballparks that do so much with very little.  Make no mistake, it is a great place to see a ballgame – but it could be so much more. 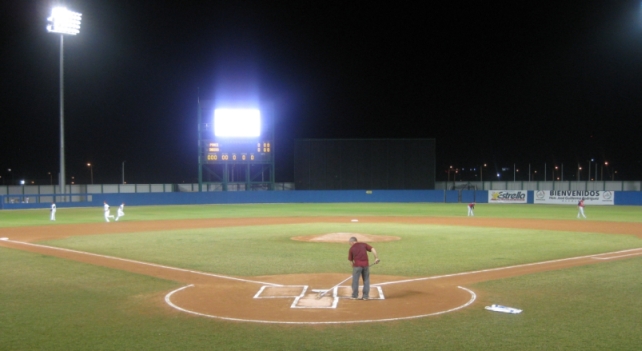 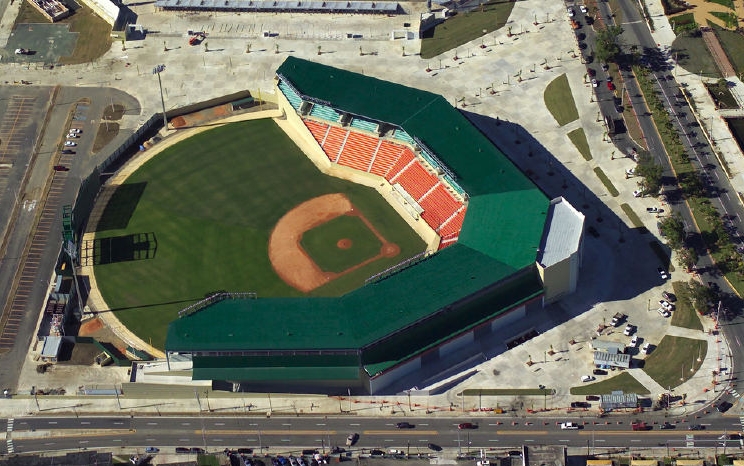 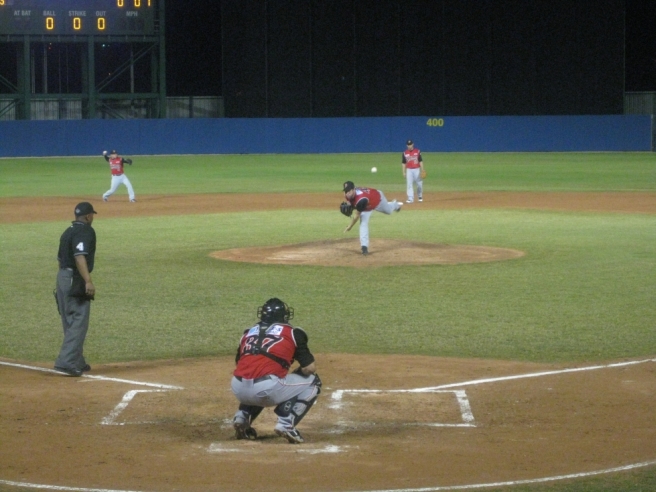 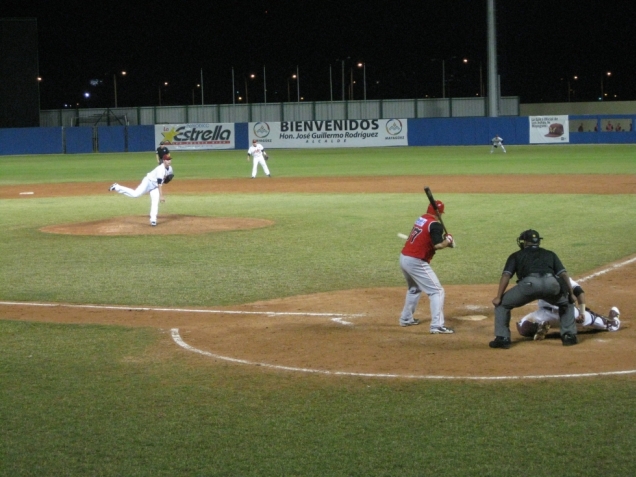 For additional ballpark reviews, check out our Ballpark Review Roundup.