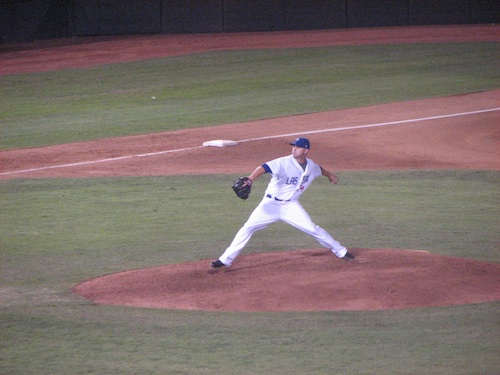 Early in the 2nd a ball was hit slightly to his right but Wallace looked trapped in quicksand, eventually taking a slow-motion lunge at the ball as it passed him and went out into RF. His footwork to the bag was also suspect. Wallace appears to need more seasoning at first, which is to be expected from a former 3rd basemen. Hopefully Brett can work out the few wrinkles in his defensive game before he gets his eventual call-up (be it late 2010 or early 2011) to the show.

Hit by a pitch two times during the game, Wallace ended up going 1 for 3 in official at-bats with a double to LF.

At the plate Wallace impressed me with his controlled batting stance. He stays back on pitches, employs very little head movement and appears to have great balance at the dish. Seeing Brett live really goes a long way in explaining his high .298 career minor league batting average. Colour me impressed.

This was not a good outing for Rzep. His fastball hovered around 89 MPH all night and was as flat as can be. His slider (high 70’s) had good action and tilt but he couldn’t throw it for strikes. This translated into Rzep getting owned, allowing 10 hits, 8 ER, 1 HR (along with 2 BB vs 5 K) in 4.1 IP.

I don’t have any footage of Broadway, although with his stuff I’m glad I saved space on my memory chip. Lance featured primarily a fastball (low 90’s) and a curve (mid-high 70’s). Taking over for Rzep, he hung a curve to his first batter, journeyman Mike Wilson. The ball must have traveled 425+ feet into the warm Las Vegas night for a two-run HR.

I can see why scouts loved this guy back in the day. Taken 5th overall in 2003, Lubanski is a toolsy player, reminding me quite a bit (toolswise) of Drew Stubbs out in Cinncy. However, Lubanski’s tools oddly didn’t translate into good defence or base running ability. Chris could live as a 4th, 5th outfield type in the majors but I don’t think he’ll be much more.

There wasn’t too much to see during this 13-6 beating. Wallace did impress. I can’t wait to see what he does in a Jays uniform.