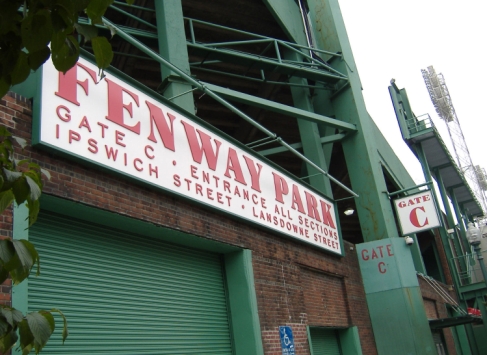 I recently was in Boston (August 2006) for the sole purpose of visiting Fenway Park.  This was my first visit to Fenway and my only other visit to Beantown had been a whirlwind tour that took us to the TD BankNorth Garden for a Leafs at Bruins game in October 2005.  I was probably in Boston for no more than 4 hours that night.

However, I had two days to kill in Boston.  I stayed in the Allston district where Boston University is located.  I knew that Braves Field was on Commonwealth Ave and that Nickerson Field was built into it.  It was easy to locate and the commemorative plaque was easy to find.  The plaque was not inspiring as Braves Field hosted some woeful Boston Braves teams.  Braves Field is probably one of the lesser-known ballparks built in the 20th century.  The right field bleachers had been adapted into the sports field at BU and I tried to picture what the layout of the ballpark would have been.  The remaining bleacher stand was of very simple design and construction of all concrete with aluminum bleachers.  I did notice at how large the structure was and I am sure it could have held several thousand spectators.  It was a very hot week in Boston with temperatures in the high 30’s and I could only imagine at how hot playing afternoon games every day in the uncovered right field stands would have been.  Also remaining was the team office and box office building.  This was an interesting building that was build at a 45-degree angle to the right field stands that remain.  The building sort of reminded me of a German mountain chalet with the stucco walls and tiles shingle roof.  This building is currently used as a daycare and a police station (I think BU campus police).

Directly across from Nickerson Field is the Agganis Arena.  This is an ultra modern large hockey arena named for early Boston multi-sport star “The Golden Greek” – Harry “The Horse” Agganis.  This great athlete unfortunately died as an up and coming star for the Red Sox (article to follow).

About 2km inbound from Nickerson Field on Commonwealth Ave.  is the Fenway Park area.  Fenway is an unassuming building and would probably be mistakable for just another building in a busy city (if it were not for the light standards towering over the streets).  The baseball neighborhood around Fenway rivals only Wrigleyville from what I have experienced. 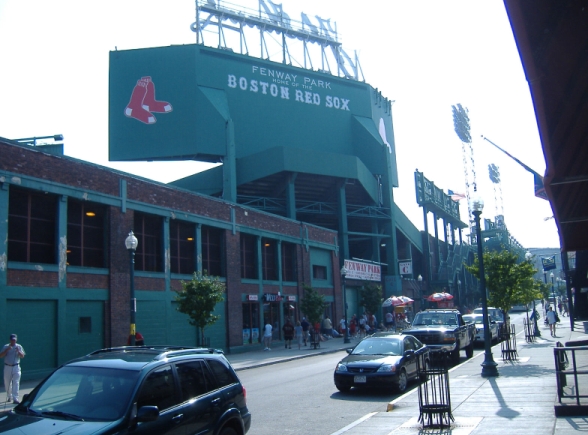 I arrived for a ballpark tour around noon and was impressed with how busy Yawkey Way around Gate 1 was.  Vendors and souvenir stands were all busy 6 hours before the gates opened.  The Fenway tour was crap.  It seemed to be a sales pitch for the new pavilion seats and roof boxes that have been added in the last couple years.  I want to see the clubhouse and dugout and groundskeepers garage and go behind the Green Monster or at least go on the field.  One tour fact I was interested in and didn’t already know was the Fenway Green is a patented colour.  It is the colour of the Monster and most other painted surfaces in the park. 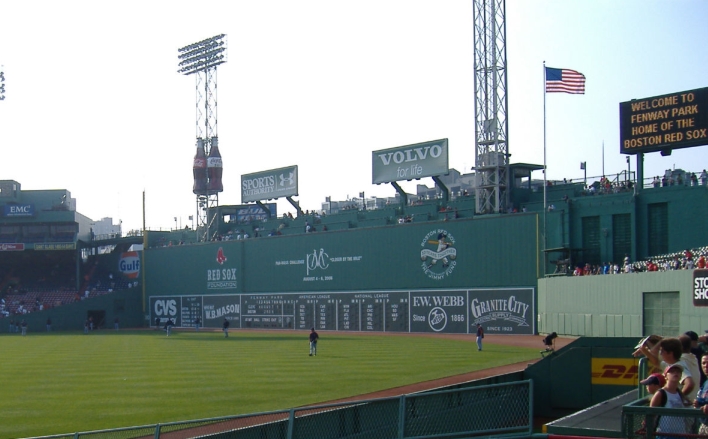 I picked up my ticket for the game at will call and went in to catch Cleveland Indians batting practice.  I was able to walk around the whole park at this time and do my own unguided tour, which I found more valuable than having a community college tourism student on a summer job tell me about Red Sox history.  I was shocked to see the amount of grown men fighting for BP homerun balls in the bleachers (which aren’t bleachers by the way, just uncovered seats) from a group of virtually unknowns in Cleveland.  The number of souvenirs the Indians put out in BP that evening was a sign of things to come later that night. 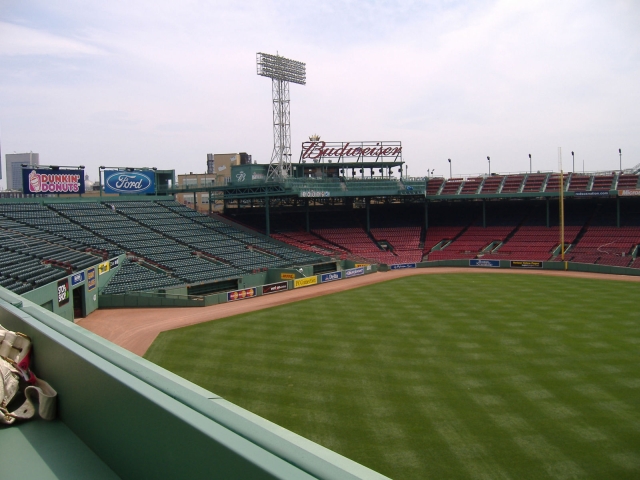 Fenway Park is very small and wherever you are you are close to the field.  My seat was right behind the box seats in sec 24 of the Reserve Grandstand.  This put me right in the Indians on-deck batters trouser pocket.  This seat probably should have read OBSTRUCTED VIEW but I was talking with a dude across the aisle from me and he says they do not put that on the tickets anymore (perhaps an organized scalper lobby campaign worked on Mr. Henry).  The price on the ticket was $45 (I did not pay this much) but there was no way by sitting in my seat could I see any play at second base – even if I crooked my neck all around the large post in front of me.  I was still close enough to see C.C. Sabathia’s change up and breaking ball leave the Sox stymied.  And to see Jason Johnson get rocked by Grady Sizemore (stud) and Co. 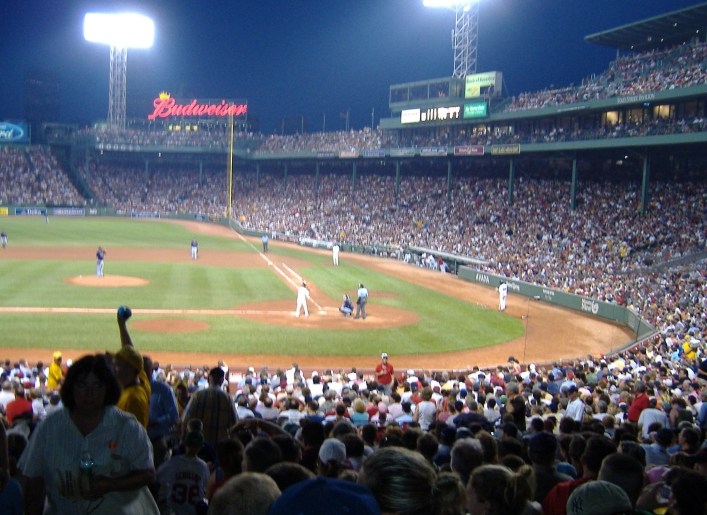 It was incredibly hot even at 7:05 when the game started.  I was under the roof and I found that it kept a lot of the heat in.  The constant announcements from the City of Boston and the Red Sox to “stay hydrated and drink lots of fluids during the heat wave” should have been backed up by the City or the Club giving out water (the SkyDome does this).  The $4 or $4.50 price tag on a bottle of water was damnable.

Red Sox fans rival only Maple Leaf fans for ignorance.  The Sox were getting rocked by the Tribe and the Fenway faithful were still cheering every play and batter.  There was a beach club party zone atmosphere and there seemed to be a very young average age in the stands.  No one seemed to be watching the game (it was a stinker) and many seemed to be more interested in talking on cell phones to hook up and get hammered after the game.  Maybe this is different in the box seats but the grandstand sections can be distracting from the goings-on on the field.

I would recommend going to Fenway once for a non-Red Sox fan.  This is an uncomfortable park with a fad fan base in the stands.  It has great sightlines and every seat is on top on the play but many seem to be behind posts.  I would recommend the tour even though it seems geared for a tourist audience rather than a baseball audience.  I would also recommend going to batting practice if you want to enjoy the park and watch the game at a pub or at home if you want to enjoy the game as the Fenway faithful make it difficult to do so.  I would also recommend the Italian sausage on a bun with sweet peppers and onions – best I have ever had. 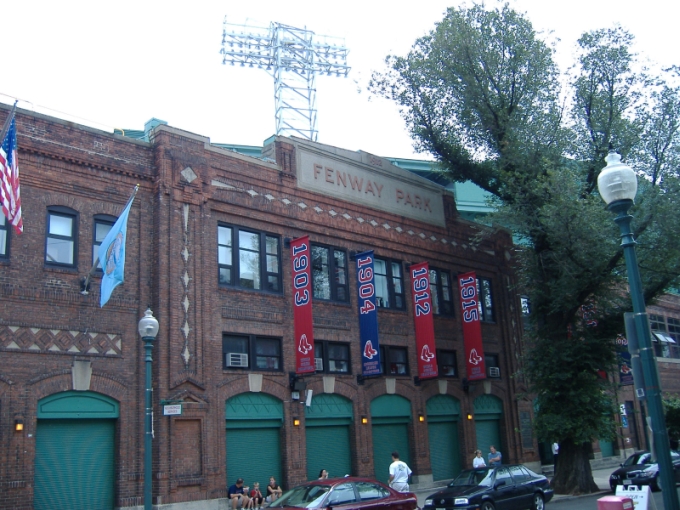