Blue Jays fans everywhere are clamouring for manager John Gibbons’ head and frankly, I don’t get it.  Entering play Sunday, the Blue Jays were in last place in the AL East, 3.5 games out of first place with a 13-17 record.  In their last 10 games, the Jays were 2-8.  Why is the team losing? Let’s have a look.

The Blue Jays (entering Sunday’s play) rank 7th in all of baseball with 140 runs scored – ahead of New York, Baltimore, Boston and Tampa.  With the injuries to Adam Lind, Jose Reyes, and the fact that 2B has been a carousel of offensive black holes for the Blue Jays, John Gibbons has the offense running on all cylinders – more or less.  Nothing to see here.

Toronto leads all of baseball with a .991 fielding percentage.  Fangraphs has the Blue Jays as the 11th best fielding team according to their fielding metric.  They are 12th in defensive runs saved.  So basically, the Blue Jays are slightly above average in the defense category.  Team defense isn’t losing the Blue Jays any games, for the most part.

Here we go.  The Blue Jays are dead last in all of baseball for innings pitched by the starting staff.  40% of the starting rotation is over the age of 35 (Mark Buehrle, RA Dickey), 40% of the starting rotation is diabetic (Dustin McGowan, Brandon Morrow).  The remaining 20% is coming off Tommy John surgery and has never pitched 150 innings of professional baseball at any level (Drew Hutchison). Blue Jays starters average 5.473 innings per game, which means the bullpen has to make up the remaining 3.52 innings.  That’s a lot to ask.

As good as the Blue Jays bullpen was in 2013, they can only do so much.  Brett Cecil has appeared in 15 games already.  That puts him on pace for 78 appearances and 82 innings pitched.  That’s not exactly ideal.  The Blue Jays are 29th out of 30 MLB teams in bullpen ERA with a 5.35 mark.  Blue Jays relievers walk the 2nd most batters in all of baseball: 4.98 for every nine innings pitched.  In 12 save opportunities, the Blue Jays bullpen has blown five.  Had they not blown those five leads?  The Blue Jays would be 19-12 and in 1st place in the AL East.  The pitching is the problem.

Gibbons also has another strength: he is a savvy handler of relief pitching, with former reliever B.J. Ryan once claiming that in his first year under Gibbons he only got up once in the bullpen without getting into a game. – Jeff Blair, Return of the most underrated manager in Blue Jays history, November 20, 2012.

The Blue Jays’ manager has continued to be a savvy handler of pitching this season.  Before Brandon Morrow landed on the 60-day DL with a torn tendon sheath in his right index finger, Gibbons openly stated he planned to use a six-man rotation with minimal off days in May.  This would give his diabetic duo an extra day between starts to heal, as well as his aging veterans and recent Tommy John victim.  It’s clever, creative and a plan that flies in the face of baseball convention.

In spite of the bullpen having to eat more innings than any other pen in baseball, only Cecil is even in the top 20 of appearances by a reliever in MLB (tied for 15th).  After that it’s Delabar at (tied 70th) and Santos at 101.  Gibbons is mindful of the workload that needs to be distributed among the relievers.  It’s a long season and Gibby knows it.

And he’s not only savvy with the pitching.  On Sunday, Gibbons had Dioner Navarro – nursing a quad injury – pinch-hit for Dustin McGowan.  After lacing a single into the left-field corner, Gibbons – playing with a thin bench – called on staff ace R.A. Dickey to pinch run for the injured Navarro.  Yet another creative move to get the most out of his roster.  Almost Joe Maddon-esque.

In an effort to generate more offense when playing inter-league games in NL ballparks, Gibbons moved third baseman Brett Lawrie to second base in order to keep Juan Francisco in the lineup.  Lawrie made it clear that he was unhappy about the move, even though it was temporary.  Does Gibbons care? Nope.

Although Gibbons does a few things that irritate me, namely wasting outs in the early innings with sacrifice bunts, I am not convinced that Connie Mack himself could get a better performance out of the pitching staff that the Toronto Blue Jays currently employ.  For the John Gibbons haters and #firegibbons hashtag users out there, what would you like to see Gibbons do differently?  Which manager out there could do a better job with this pitching staff and how?  Let us know in the comments section below. 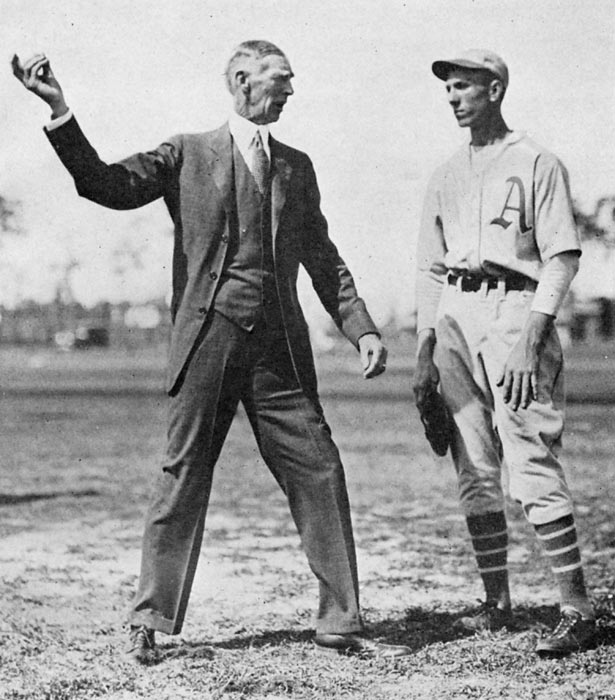