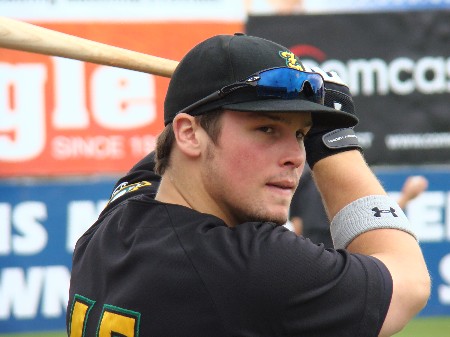 Travis Snider was drafted by the Toronto Blue Jays with the fourteenth overall selection in the 2006 amateur draft. Snider played his High School baseball at Jackson High, in the state of Washington. The selection of Snider broke a long running trend set by General Mangers JP Ricciardi, who in pure money ball fashion prefers to draft college players in the early rounds of a draft. In fact, outside of the selection of Snider, JP’s highest pick used on a high school player was 206th overall, in 2002.

One of the historical knocks against drafting a high school player with a high selection is that you will have to wait a few years for them to grow into their bodies. This should not be an issue for Snider, who stands at a height of 6 feet and a weight of 220 pounds. He even played running back and linebacker in high school.   Baseball America ranked Snider as the fourth best high school player heading into the 2006 draft and he has done nothing to dispel his ranking. Below are his stats from short season Appalachian League rookie ball.

Talk about some great stats from an 18 year old! Plenty of power, average, walks and he even threw in six steals.

When we look at his splits we have to be impressed with his .957 OPS vs. left handed pitchers. Now, if we had to pick on one thing it would be his walk to strikeout ratio against lhp, at a rate of 20:4. This would indicate that he isn’t picking up the ball as well out of a lefty’s hand as opposed to a righty’s but again this is a small sample and quite a small sticking point for a player that slugged .609 against left handed pitching. However, it will be an interesting area to keep an eye on in the near future.  From what we have gathered at Mop Up Duty, Snider will not be participating in any winter leagues. With a promotion to low A all but assured for next season the future looks bright for Travis Snider and he will certainly be one prospect to keep an eye on.