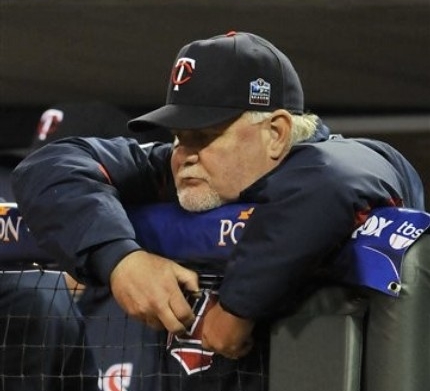 He picked up the Minnesota Twins when they were just getting beyond the contraction talks and has seen them into the new Target Field and stability in the Twin Cities.  His leadership and vision has allowed the Twins to lock up their superstars in what has traditionally been a small market.  He has led the Twins to 6 AL Central titles in the last 9 years, more than any other team, save for the Yankees who have also managed 6 titles since 2002.  He will likely win the AL Manager of the Year Award.

After the debaucle of a playoff series that ended on Friday night Gardenhire has led the Twins to a total of 6 wins in 7 playoff series in his 9 year tenure at the helm.  The only series he was able to win, was the 2002 ALDS against the Oakland A’s.  The Billy Beane and Moneyball inspired A’s were a charm of the regular season as well, but could never win in the playoffs.  That, and a Billy Koch meltdown in the top of the 9th in game 5 let Gardenhire win his playoff debut.

KMan called him out after game 2 which can as much be attributed to untimely umpire calls.  There is no reason for him to have left Carl Pavano in the game as long as he did.  True, an injury to perennial MVP candidate Justin Moreanu hurt the team, but Morneau was replaced by Jim Thome and Michael Cuddyer, hardly Replacement Level chumps.  There is value in change for the sake of change.  The pressure will mount on Gardenhire, his stars and every loss to the Yankees will be like a root canal.  Get rid of him, give the team a fresh start.  Building a new stadium didn’t work…

Since that playoff win, the Twins are 3-19 in playoff action.   This includes a 12th straight playoff loss on Friday.  The Twins have notoriously been unable to hold leads.  Gardenhire’s meltdown in game 2 did not work.  Managing his team hadn’t worked in years so he tried to inspire them with getting tossed.  The result?  Fail. 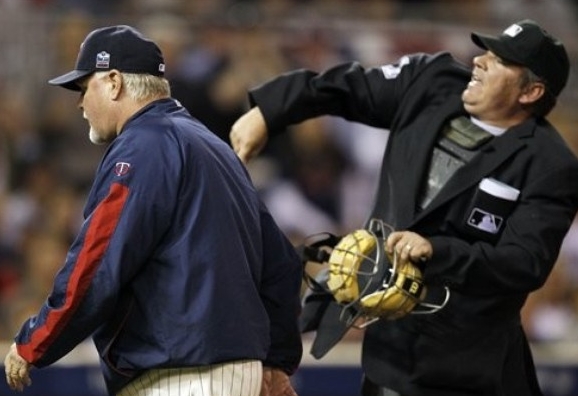 Sure, in the long run Gardenhire may eventually be able to lead the Twins to the Promised Land but the long run will run out and the those living in the Upper Midwest, Target Field will become just like the Metrodome, a stepping stone for other teams’ quest for the American League Pennant.