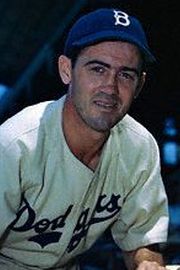 Today is All-Star Tuesday, the traditional Mid-Summer Classic. While three Canadians are suiting up for this years Classic, mud.com will look at one of the first Canadian All-Stars.

Goodwin “Goody” Rosen, born in 1912 in Toronto, grew up playing many sports in the Parkdale area of Toronto. Like many other Canadian ballplayers contemporary with Goody he grew up playing softball but swtiched to baseball in 1931, at 18, when he signed with the Rochester Red Wings (AAA). He played in the minors for some time. He made his Major League debut on Sept. 14 1937 for the Brooklyn Dodgers in a win over the Reds at Cincinnati. Goody had a great full first year in 1938, playing stellar defense in the quirky NL outfields. He hit .281/.368/.389 to go along with the glove.

When the Dodgers made a managing change in 1939, replacing Goody’s minor league manager Burleigh Grimes with Leo Durocher the Dodger’s and Goody went separate ways. The Dodgers had been mired in the second divison for 20 years and when Durocher came so did the wins in Flatbush.

At the beginning of 1940, Goody, who had play just over 200 games for the Dodgers was out of Major League ball. He returned to the International League, playing for the Syracuse Chiefs as well as the Montreal Royals. The Dodgers, like most of organised baseball fell upon hardtimes during the war years. For some reason, Goody played in the IL the entire time. He did not sign with the Dodgers after GM Larry McPhail ‘phailed’ to offer him better terms.

I have been unable to find any details about his war service but it seemed that unlike almost every Canadian ball player during the second world war. He was somewhat sickly at the time he was just breaking in and I found a reference to him being 4-F but nothing else. Anyways, with the Majors depleted, Goody stayed in the Minors until he made his return to Ebbetts in 1944. He did sign a ML contract with the Pirates in 1941 but never played. Goody earned a full time spot on the Dodgers, under Durocher in 1945. The Dodgers finished with a winning record and in third place but were well back of the NL Champs Chicago Cubs. The Dodgers had a stellar offense, scoring 40 more runs than the next best team in the NL. They were led by Augie Galan, Dixie Walker, Luis Olmo and Goody Rosen. He batted .325/.379/.460 and led the Dodgers in home runs, hits, runs, average and more. He also played a stellar centrefield with a FA of .993 he also had a range factor for a centrefielder of 2.83 vs 2.33 for other outfielders. Goody was in the top 10 in most NL offensive categories and recieved some votes for the 1945 NL MVP award.

Goody was chosen to represent the NL at the 1945 All-Star game. Thus making him the first Canadian to represent the senior circuit (Twinkletoes Selkirk was the first Canadian All-Star). Unfortunatley for Goody, 1945 was the last season the All-Star game was not held. Travel restrictions caused the cancellation. In the numerous strike seasons from 1972-1994 never an All-Star game was missed but a World Series was cancelled, a season was split in half and the Tigers won the AL East pennant by a half game one year.

The Dodgers had a tremendous 1946, they won 96 games but finished in second to the WS Champion Cardinals. Goody, only played 3 games for the ‘Bums’ in 1946, before being traded across town to the Giants. Goody played well for the last place Giants, he was nowhere near as stong at the plate but had another stellar season in the field, a 2.42 RngF to a league 2.16. Goody was played much more in right field in ’46, his final big league season.

Goody was 34 in 1947 and his career was cut short by an injury at the Polo Grounds. He returned to the IL that year, nonetheless, to play with Jersey City and eventually his hometown Toronto.

When Goody was finished with organised ball he continued to play in the Ontario Intercounty League as well as the Toronto Beaches Softball League. Rosen retired from competitive ball in 1951. After his baseball career he went into the restuarant business in Toronto.

Goody Rosen’s legacy as the first NL All-Star from Canada is important but he is special to the Jewish community. He had a career batting average of .291 placing him eigth all-time amongst Jewish players, ahead of notables Shawn Green and Steve Yeager. Goody will forever be the first Canadian-born Jewish Major leaguer.