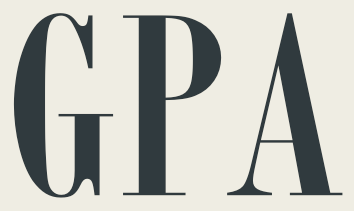 After writing about the value of a largely OBP% prospect that can’t slug (Scott Campbell) yesterday, I decided to go back and take a look at the 2008 Toronto Blue Jays and the AL from an OBP perspective.

In the classic baseball work Moneyball, there is a small section outlining a study by Paul Depodesta, in which he purports that OBP is worth three times the amount of SLG. Off of the top of my head I have a hard time believing this. A player with a .333 OBP & a .400 SLG would get a score of 1.4, as would a player with a .300 OBP and a .500 SLG. I’d rather have the player with the .500 SLG any day of the week.

So while I do agree that an additional 0.10 in OBP is certainly worth more than 0.10 jump in SLG, I don’t agree with the three times ratio.

And neither do the folks over at the Hardball Times. They’ve created a metric which is a variant of OPS and have named it GPA. GPA is an equation that gives more weight to OBP, The equation is

Via the Hardball Times:

Let’s look at the 2008 Jays, a team made up a large slugging basis with little regard to overall OBP. I’ve thrown out players with less than 100 PA in a Blue Jays Uniform.

Of qualifying players in the American League, the highest ranking Jays is 39th. 39th in the AL… From this equation we can see the value of players such as Rios diminished, as he is only a point better than Overbay, two points better than Rolen and only five points better than Joe Inglett. Super low OBP players such as Barajas and McDonald take a real beating in this equation. Yet a decent OBP player such as Scutaro still scores relatively low due to his lack of slugging ability.

I don’t know what the take away is from this list. I guess it depends on your belief in the system/equation. Here are the top 10 AL players for 2008: 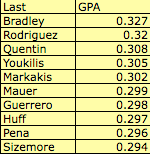 That’s a pretty solid list. We can see players such as Youkilis, Markakis and Mauer gain a higher GPA league ranking than their respective OPS rankings due to the slant in OBP in the equation.

While I’m not sure if I agree with GPA over OPS, it is a nice comparison stat for players with lower overall OBP.