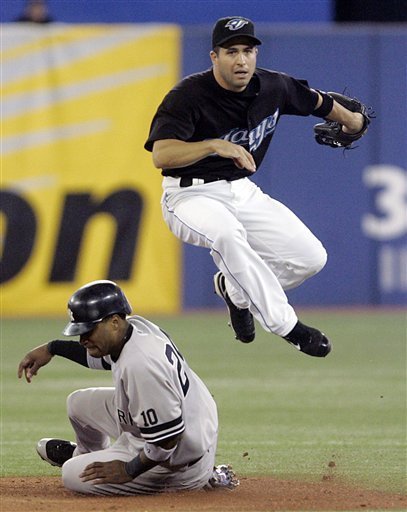 … [O]ne of my earliest aesthetic experiences – the sense of something that might be called beauty, though I could not have said so at the time – was playing second base in a double play. It went so smoothly, a perfect line reeled out from the shortstop to me to first base, and I felt my body disappear inside a motion, gave myself to something larger than myself, something that might possibly be called beautiful. …
— B.H. Fairchild 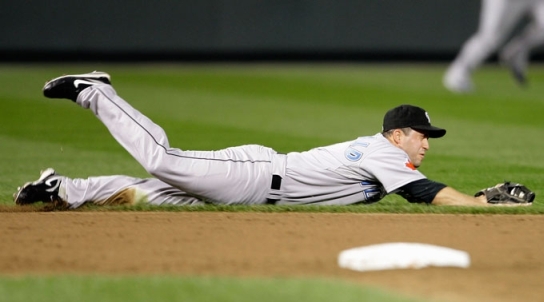 Baseball is one of the few games where defense is as exciting if not more exciting than the offensive part of the game.  One of my favourite things to watch is a slick-fielding infielder range to his right or left to snag a groundball and come up throwing in one effortless motion and fire a bullet to first to nab the runner.  It is so simple and happens many times during a ballgame but the grace and elegance of the fielding process always leaves me spellbound.  One could make a legitimate comparison to ballet without the homoerotic connotations.

When it comes to the signing of John McDonald, apologists are quick to point out that he plays exciting defense and despite the Blue Jays being in a rebuilding phase, front office needs to give fans a reason to come to the ballpark and Johnny Mac gives fans this reason. 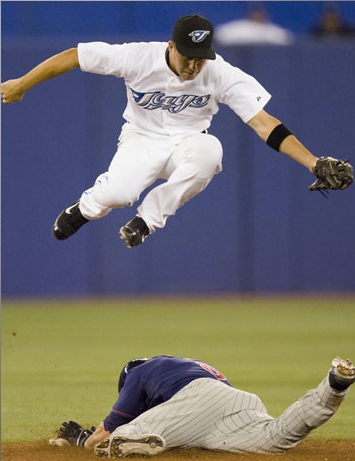 Of course, Cito needs to play him more than 30 games a season to make this a reality but I don’t think that this point gets the attention it deserves.  When I go to see a baseball game, I go for one reason: to be entertained.  Now this includes watching the fundamentals of baseball be executed by the highest level of practitioners in the game.  But I do want to be “wowed” and Johnny Mac provides this wow factor.  Nothing is as boring as a stone-footed shortstop like Edgar Renteria who makes all the plays on the balls hit to him but never makes an extraordinary play.  I will pay face value for a ticket to a Jays game for the priviledge of watching John McDonald hone his craft.  I may be in the minority but I doubt I am the only one.  In a season or two of baseball that is going to be a wash, the difference between going to a game and not going could very well be John McDonald or Alex Gonzalez starting at SS over a sure footed (if slow and unremarkable) player who gets on base at a reasonable clip.  Walks are not sexy, especially in a rebuilding year.

In praise of the art of defense I have linked a few of my favourite web gems of the past season.  (I would embed, but you know, I’ve got to play by the rules..) Sorry about the lame ads preceding the videos.

I hope you enjoy these as much as I do and don’t feel any shame in replaying them over and over again.  I’ll start off with a taste of hopefully what is in store for us next season from the one and only John McDonald.

John McDonald, playing 2B, ranges to his right and makes a diving play

The versatile McDonald, playing 3B this time, dives to his left and starts the double play

One of the great defensive shortstops ever, John McDonald’s mentor Omar Vizquel – the third play in the reel is especially impressive as it shows his vision of the field and awareness of what is going on in the game at all times. You hardly EVER see a play like that.

Johnny Mac doing something UNREAL at 3B

McDonald saves Brandon League’s hide – This is exactly what I was talking about in the first paragraph of this post.

Rafael Fucal shows off his cannon

Poetry in motion from Hanley Ramirez

For me, this is one of the more difficult plays – throwing toward a base that your momentum is already carrying you to

Tulo does his best ballerina impression

A nice spin and throw from the former GBOAT 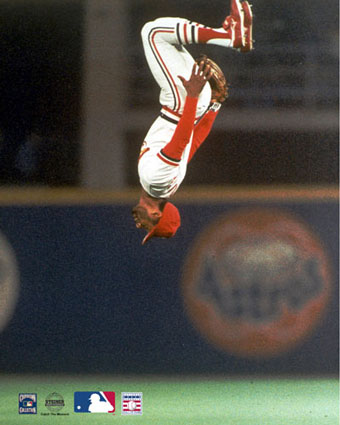