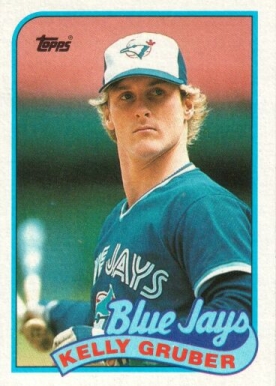 My favourite Blue Jay by far – Kelly Gruber – was in town a week ago today for the Flashback Friday gimmick.  Gruber, a father of 4, took 2 of his sons (Kyle,14 & Kolton, 12 – absent was Kody, 18) on the field with him to bask in the glow of the Toronto Blue Jays fan support. 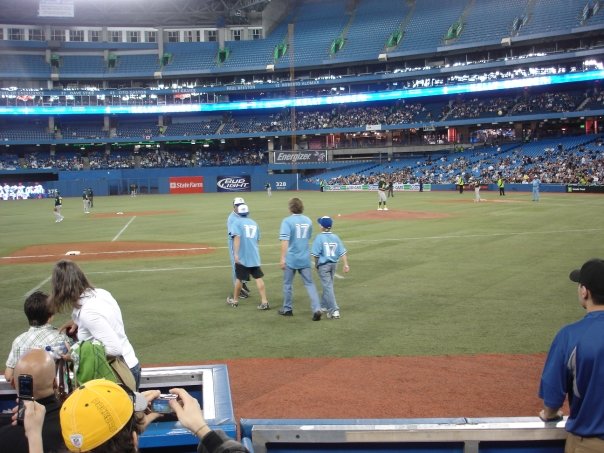 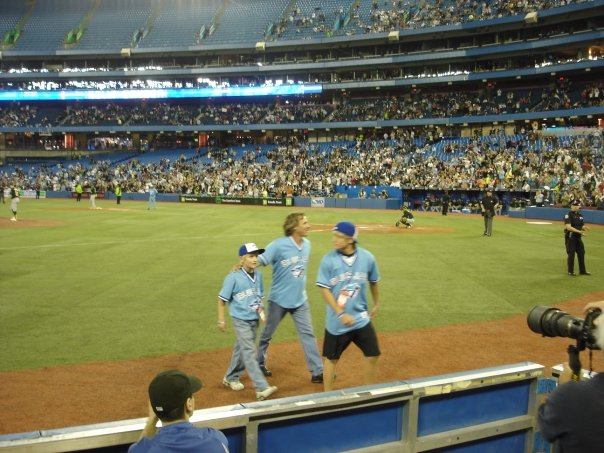 During this most recent iteration of the Kelly Gruber love-in, Gruber took time out of his busy schedule to answer questions from Jerry Howarth about the glory days of the Jays.  In the interview, Gruber discusses Roberto Alomar’s memorable home run vs. Dennis Eckersley of the Oakland A’s (also alluding to the middle finger incident where Eckersley flashed the Toronto dugout the “bird” after a strikeout).  He also mentions the phantom triple play in Game 2 of the 1992 World Series where the umpire blew the call and admitted it. As well, on the play Gruber injured his rotator cuff and couldn’t lift his arm more than 6 inches off his side after the play. (Not mentioned in the interview is how despite this injury, Kelly was still able to slam the game-tying home run in Game 3).

Currently, Kelly is a coach on his son Kody’s senior baseball team, the Austin Black Wings.  Last season he helped coach them to a National Championship.  Gruber says Kody “wants to be No. 17 and play on the corner,” but he’s trying to push him to get a taste for all positions on the field, something he encourages all young ball players to do.

“Play all the positions and really get to know the game from every position, because it changes, the angles change, the strategy changes,” said the Houston-born Gruber.

“When you’re versatile like that, it makes you more valuable. Coaches and managers know they can play you all over the place and you’ll get to play a whole lot more, believe me.”

As well, Gruber has some thoughts on this year’s team.  Gruber believes Scott Rolen, in his first year with the Jays, might be “the best third baseman that’s come around in a while.”

“I know he’s got talent, he appears to be a clutch hitter with good hands. But he’s on the ground, he’s getting dirty, he’s diving for balls and I hear good things about it. The Blue Jays ought to feel fortunate.”

Some of you hardcore Jays fans might remember Cito griping about Gruber’s injuries, remarking at one point “it’s always something with that guy”.  Despite the perceived rift between manager and player, Gruber had nothing but positive things to say about his former bench boss.  Asked what he thinks about the club bringing Gaston out of the boardroom and into the dugout, Gruber said: “I love it! They should have never got rid of him.

“He’s best suited to be on the field, working with the kids, the strategy of game to game and managing,” Gruber gushed about his former hitting coach and manager.

“If there’s anybody that can turn this thing around it’s him, and I hope J.P. Ricciardi really gives him the reins.” 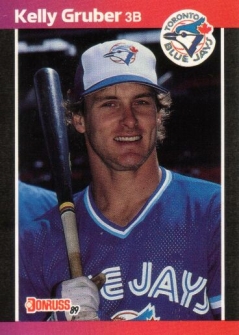 In 1989 he became the first Jay to hit for the cycle when he famously stretched a double into a single.  Gruber also gained notoriety for his sarcastic tomahawk chop in front of Jane Fonda, Ted Turner and 51,000 Atlanta Braves’ fans at Fulton County Stadium.

Gruber caught the final out in Game 2 to give the Jays a dramatic 5-4 victory, Gruber gave the Braves’ fans their own tomahawk chop after catching the ball.

“Oh, man they didn’t like that,” Gruber said. “I just felt that if 60,000 fans can give that to us for the whole game, one can give it back to them. In Game 6 when we came back to Atlanta, boy did they give it back to me.”

Gruber was also involved in flamethrower Nolan Ryan’s seventh no-hitter. However, he was on the losing side.

“I came up in the first inning and he hit me in the head with a curveball, thank God it was curveball.  The guys in the press box told me they were so surprised because Ryan came over and asked me if I was okay. Usually Ryan would just ignore you or tell you to get first base. I guess it was because we are both from Texas.”

He went hitless, but it was one of his fondest moments in his career.

“One of my proudest moments was that I was the only guy in the line-up who didn’t strikeout,” Gruber said with a laugh.

Kelly Gruber will be returing to Toronto August 7 as part of the 1992/1993 World Series Champion team reunion as part of the Flashback Friday celebrations.  Kelly currently lives with his hot wife Tonna who was recognized as an exceptional agent in the Wall Street Journal and Barron’s Financial Weekly. He also had that awesome chin first slide in the 1992 World Series, besting Todd Stottlemyre.