With the recent departure of Roy Halladay, I have been reflecting on his time in Toronto. To me, it seems like a blur of super-human performances and total domination of the opposition. It is difficult to choose only a few highlights because there are so many, but with the wound so fresh, the following are the Roy Halladay moments that I will remember him most for:

The near-no-hitter in his 2nd big league start

I remember a teammate of mine was in attendance for this game and was sitting directly above the Blue Jays bullpen, watching the unknown rookie Halladay warm up before the game. It was odd because Doc was throwing to Benito Santiago in the bullpen, yet Darrin Fletcher was penciled-in as the starting catcher for the game. Regardless, my teammate spoke about how the sound of Halladay popping Santiago’s glove was like fireworks in the bullpen. At one point Santiago paused and grimaced while shaking his glove as if to say, “this kid’s got some heat.”

Anyway, Halladay pitched 8 2/3 innings of no-hit ball before Detroit’s Bobby Higginson broke up the no-hitter — and the shutout — with a 2-out home run in the 9th inning.  The Jays still won the game 2-1. Although Halladay showed some of the promise that Jays scouts saw in him, little did he know what was about to come in the following seasons.  Roy would go on to throw his second one-hitter this past season vs. the Yankees.

Halladay’s final start vs. Cleveland in 2001

After the misery that Halladay endured following his relegation to the lowest level of the minor league system, Doc slowly began to rebuild his confidence over the course of the 2001 season. This game marked his “coming out party”as Halladay spun a no hitter into the 8th inning before giving up singles to Travis Fryman and Wil Cordero. 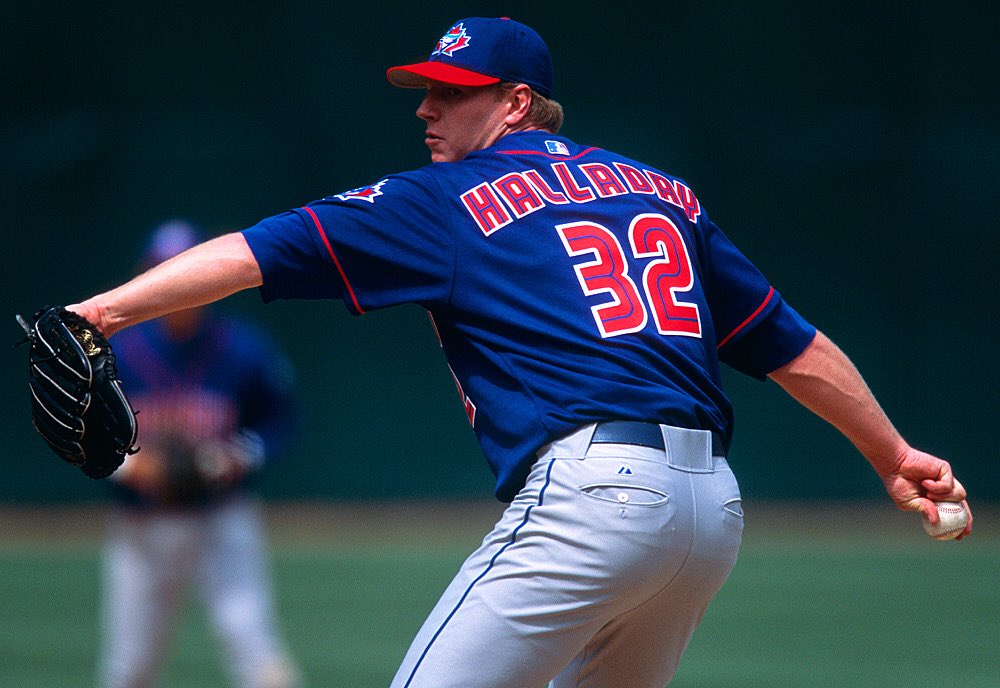 The 98-pitch, 10-inning shutout vs. the Detroit Tigers

Like Toronto’s other franchise pitcher, Dave Stieb, Halladay was cursed with a sub-par team defense and a lack of run support. This was one of those games. Despite flubs from Eric Hinske at third base and an anemic Jays offense that couldn’t touch Tigers’ mediocre starter Nate Cornejo, Halladay plugged away, quietly going about his business.  At the end of the game, Halladay had turned in 10 innings of shutout baseball with three hits allowed and a win. Oh yeah, one more thing – this 10 inning game lasted 2:03 and Halladay threw only 98 pitches!

When A.J. Burnett joined the Toronto Blue Jays in 2006, he was given a locker next to Roy Halladay’s. The reason? Halladay’s work ethic was legendary and A.J. Burnett’s had considerable room for improvement. 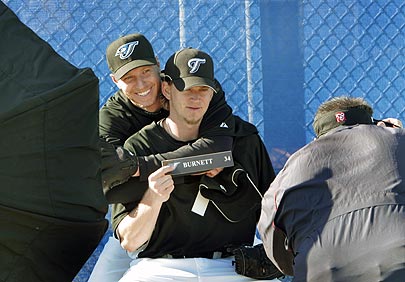 Little did anyone know that Halladay felt threatened, worried that he might cede his #1 starter status to Burnett.

“They label you as the No. 1 guy, and you have a guy here that’s got more talent than you, and you know that as soon as he figures it out, you’re not going to be there any more,” said Halladay.

Gradually, both pitchers realized they needed to quash their rivalry and both join forces.

“It’s just something that came,” Halladay said. “I think we both realized it was better that way. It’s hard to compete sometimes against each other like that. It was good for both of us because I never had a guy that was that talented behind me, and it pushes you. You always want to do better because you know this guy’s got the capability to take your spot.

The two pitchers forged a close friendship. Burnett credits Halladay’s influence for helping him achieve his best statistical season in 2008.  Burnett posted a career-high 18 wins to go along with 231 strikeouts. 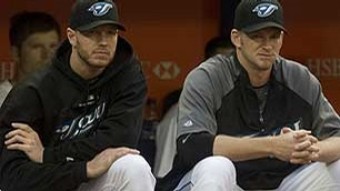 “I went (to Toronto) for a reason,” Burnett told MLB.com. “It was only for three years, but I believe that reason was to be around a man like Roy Halladay. You see someone out there that’s great and gets better every time. That kind of opens your eyes a little bit.”

Following his career-year, Burnett decided to opt-out of his contract and join the New York Yankees so that he could get PAID.  Burnett signed a 5-year $82.5 million deal.

This season, during the month of May, the Blue Jays were leading the AL East, although had yet to test their mettle against a divisional rival such as the Yankees.  Despite the Jays’ success, attendance at the Rogers Centre was lacklustre; games barely attracted 20,000 fans.  However, a week or so into the season, a buzz began to grow: the scheduled starter match-up when the Yankees came to town would see A.J. Burnett pitted against Roy Halladay.  Master vs. Apprentice. Student vs. Teacher. Etc. etc. etc.  The Jays had not generated this much buzz since the heady days of 1992-93.  It was estimated the Jays would attract 35,000 fans to the game, with more than half  of the tickets sold being of the walk-up variety. 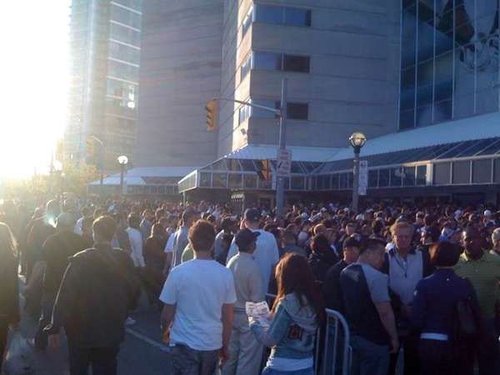 (This was the scene outside the box office before game time. Unbelievable.) 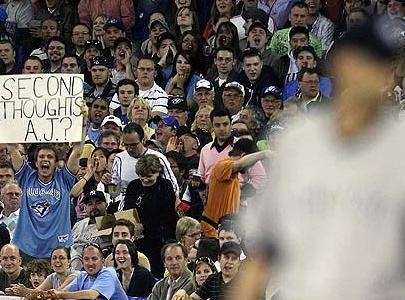 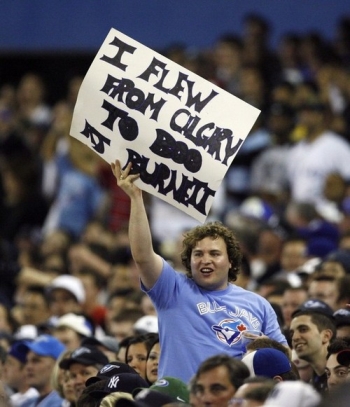 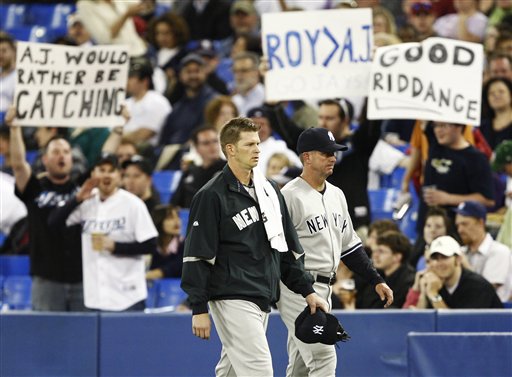 In typical A.J. fashion, Burnett wilted under the pressure and lost control of his fastball.  A.J. gave up five runs over 7+ innings while walking four.  Halladay went the distance (of course) while giving up only five hits in a complete game while walking none.  The Blue Jays went up against the “evil empire” and won.  David beat Goliath.  For one night, anyway.  And one night was enough for what turned out to be 43,737 fans. 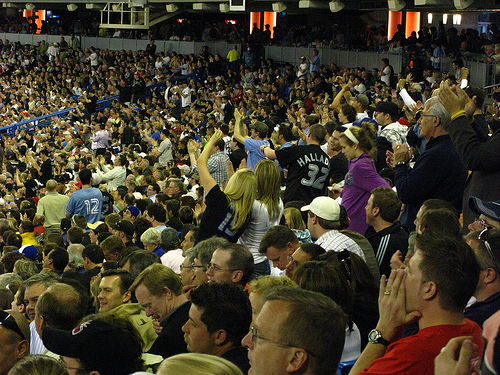 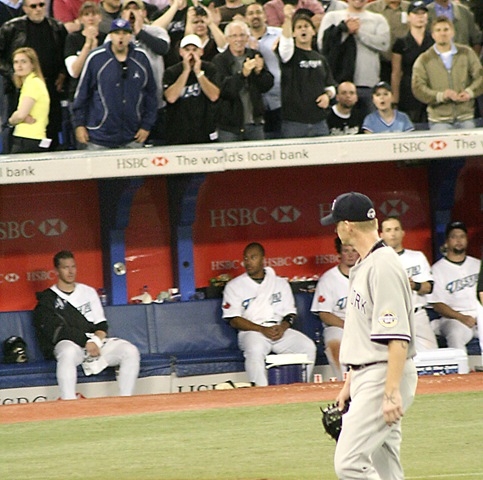 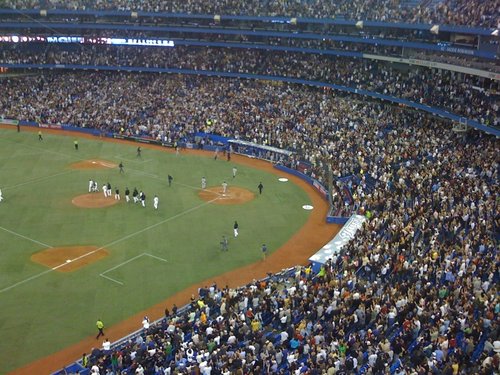 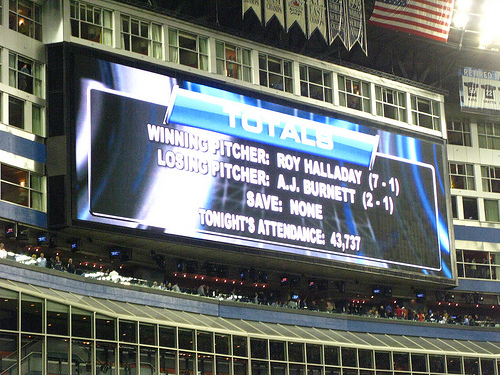 The Blue Jays had never done it before in franchise history.  Doc shut them down for seven strong.  For a moment in time, they believed they could. And they did. 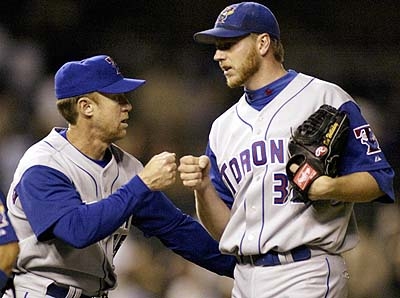 Halladay became the first pitcher in franchise history to win 22 games in a single season and sealed his Cy Young credentials with this game. Of course, it was another complete game… (the last of his team-record four consecutive complete games and 41 shutout innings) and only lasted only 2:07. 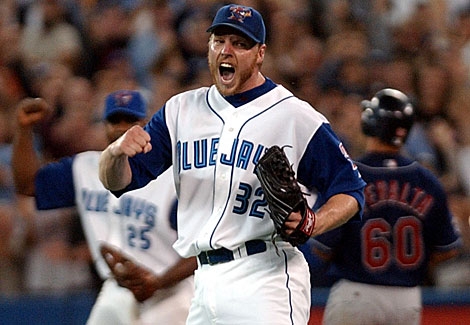 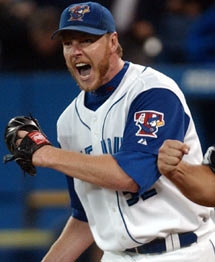 Last season, the Blue Jays were in Philadelphia under very stormy skies.  Toronto’s starting pitcher, Shaun Marcum, was pulled after a single inning. Then there was a rain delay.  Blue Jays manager John Gibbons walked past Roy Halladay’s locker in the clubhouse and made eye contact with Roy. In response, Halladay just pointed at his cleats.  Gibbons told Halladay that never in a million years would he have his prized starter enter the game as a pinch runner.  Doc shook his head, pointed to the bullpen and said “I’m ready to go if you need me.” Doc came into the game after the rain delay and stranded the two inherited runners. All told, Doc pitched 2.1 innings with 1 hit and two strikeouts over 23 pitches.  The Jays went on to win the game. 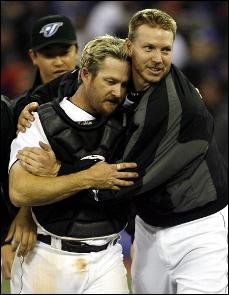 Halladay wins his 15th in a row

Again, thanks to a Blue Jays team with a shaky defense and anemic offense, Halladay went winless during the month of April.  Not to worry though, as Halladay spun off 15 straight wins. Game #15 was of the two-hit variety. 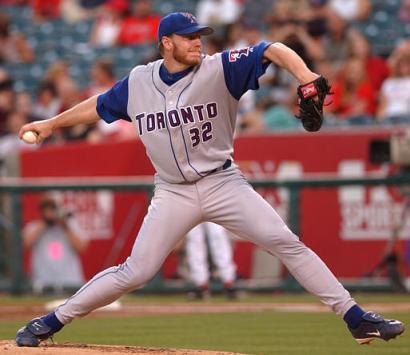 Halladay learns to look like a bad-ass from Pat Hentgen

During his time in Toronto, Roy Halladay ran a program called “Doc’s Box.”  It was a luxury suite paid for by Halladay for the use of sick children to enjoy the game.  Halladay instituted the program after signing his first multi-year deal.  Roy’s wife, Brandi, is critical in helping to manage the program.

“Roy and I want to be able to do more with Doc’s Box but we’re kind of at our max,” Brandi said. “We can’t have more days because the hospital just can’t get them here. We have the ability to do it, but the hospital just doesn’t have enough staff. So, we’re trying to figure out how we can expand Doc’s Box. Our way is going through Ronald McDonald House, doing something for the families who are involved with (terminally ill) children. It’s an amazing charity.” 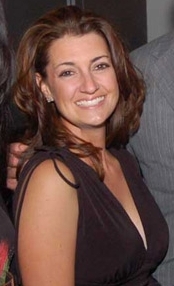 Not only is Brandi an integral part of Doc’s Box but she also spearheads the Lady Jays food drive.  As well, Roy has been involved in the Make-A-Wish foundation and takes time out of his schedule to “have a catch” with some very special children.  Not only is he a stud pitcher but he is a stellar human being.

Rest In Peace, Doc. Your legacy will live on forever. ? pic.twitter.com/hYImlQJeh0

A giant in the community. 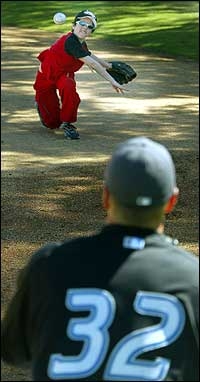 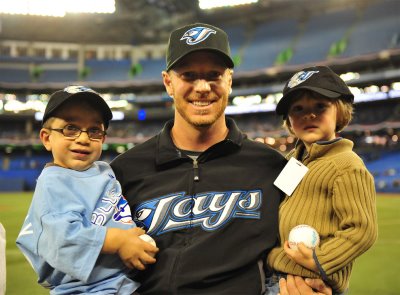 Halladay wails on a guitar 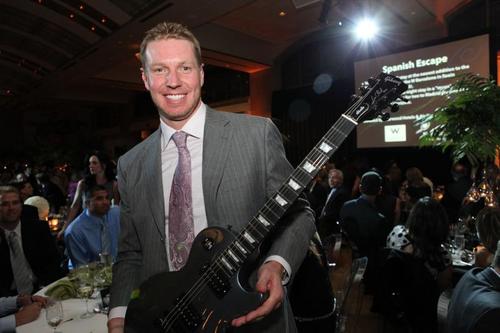 Well, not wails. But close.

Halladay stands up for his teammates 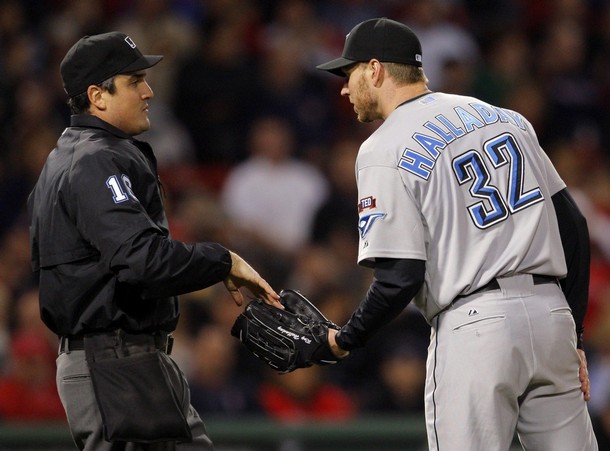 After watching his teammates get abused and bullied by Boston pitchers, Halladay decides to take liberties of his own.  It is best seen here.

This was a summer in which media and fans hyped every second-half start as being Halladay’s final start at the Rogers Centre.  The game played on September 25, 2009 ended up being the one.  This was a classic Halladay start in every sense. Complete game shut out.  Total domination.  Slightly over two hrs (2:11). No walks.  A performance to give the fans something to cheer for. Thank you, Roy. 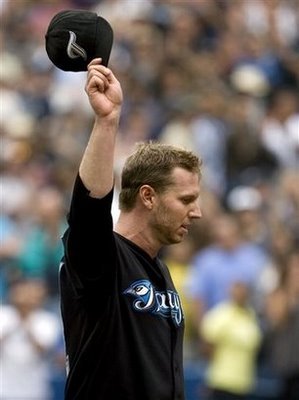 Halladay makes his way back to the big leagues

In 2000, Roy Halladay posted the highest ERA from any pitcher with more than 50 innings in baseball history. He was then sent to the lowest level of the Blue Jays’ minor league system to start from scratch.  He was broken down and built up again. He re-constructed his entire delivery with the aid of Blue Jays lifer Mel Queen.

In 2001 Halladay pitched five times for Tennessee and twice for Triple A Syracuse with dominating results before the Blue Jays brought him back to the big leagues. He went 5-3 with a 3.16 ERA. He was a completely different pitcher, with superlative sink, late movement and command.

And the rest, as they say, is history.

We’ve watched Roy Halladay grow in front of our eyes from a boy into a man.  He has been a part of our lives for 12 years. 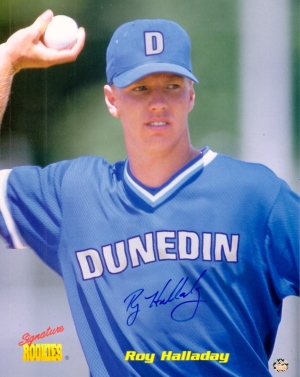 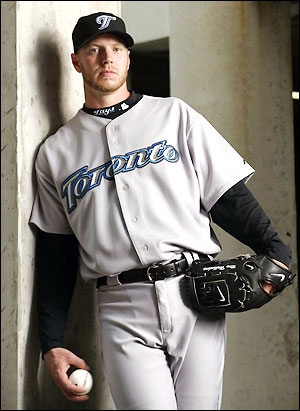 This breakup doesn’t have to be permanent.  With the news that Halladay has signed a 3-year contract with the Phillies, the window is left wide open for a return to the Jays when Alex Anthopoulos’s plan has come to fruition.  How likely is this scenario? Only time to tell.  In the words of Halladay: “Finishing strong, that’s what’s important to me.”