How Canada can beat Team USA 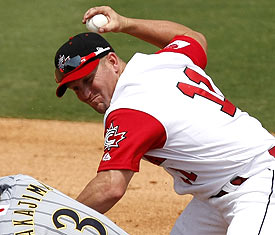 Pushing back #1 starter Scott Richmond to start in the second game of the tournament sends a clear message that Canada is saving themselves for a more realistic chance vs a weaker squad. Bullpen usage will be the key for the pitching staff vs Team USA.

It goes without saying that pitching depth is minimal, with arguably only one (Crain) MLB tested arm on the staff. Who and when more reliable arms come out of the pen will be important. Will manager Ernie Whitt bring out the big guns if the game is close vs team USA or save them for the second round?

Undoubtedly Team Canada knows about this but for those of us watching in the stands or at home you will be able to tell when Jake Peavy is about to throw one of his three off-speed pitches.

Of course the entire MLB knows about this and they still can’t hit him, so take it for what it’s worth.

The line-up appears to be created after reading a sabermetrics textbook, with the majority of players having high walk & power numbers in the MLB & MILB (Morneau, Bay, Weglarz, Stairs, Votto, and Martin).

Team Canada will probably have to rely on the ‘walk and a dinger’ offense to be successful in the tournament.

Realistically Team Canada’s best chance at pulling off the upset is to jump out to an early lead and hope that the bullpen can shut down Team USA in the latter innings. With the weak pitching depth simply hanging around into the sixth and seventh innings could be dangerous.