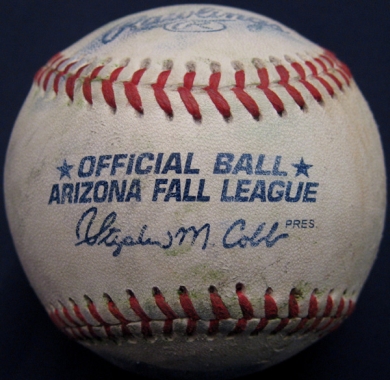 At the end of the season we profiled a group of highly touted Cuban prospects headed for the Arizona Fall  League.  Here’s how they did:

Hechavarria didn’t last long in the AFL.  He was scratched after 4 at-bats due to a pre-existing hamstring injury.

ESPN’s Keith Law was very much enamoured with Jose Iglesias’ defense early on in the Fall League campaign:

Jose Iglesias put on a small show while fielding grounders during BP on Thursday morning, and followed it up with a few nice plays during the game. He’s a defensive wizard, with effortless transfers and excellent range, and while I haven’t seen him showboat during a game (this year or last), Iglesias did show off a little during that practice session. I was most impressed when Iglesias saw a ground ball coming, and at almost the last second did a quick 180 and caught the ball cleanly while it looked like he wasn’t even able to see the ball. At the plate …

Keith must be following his mother’s advice of “if you don’t have anything nice to say about someone, don’t say anything at all.”  At the plate, Iglesias has struggled.  His OBP is below .300 and isolated power is virtually non existant.  An OPS of .575 against the minors’ best and brightest is not getting it done.  Said Iglesias, “”I struggled a little with the pitchers, reading the pitchers, but it’s getting better.”

He is, however, recovering from a broken finger so it is hard to gauge exactly how healthy he is.

Here is some footage of Iglesias’ fluid defense.

As a 28-year old prospect, Anderson has not done particularly well against the far younger AFL competition.  Perhaps Anderson isn’t ready to fill the shoes of Carlos Peña just yet.

The highlight to his AFL campaign so far has to be his walk-off home run in the Rising Stars game.

The tie-breaking homer was the first run scored since the third inning in the West Division’s 3-2 win over the East Division.

A 28-year-old outfielder in the Rays system, Anderson barely cleared the right-field wall on a 1-0 offspeed pitch from Rockies right-hander Bruce Billings. The Cuban defector hit .302 in three combined Minor League stops this season, and went 2-for-4 as the only player with multiple hits

As he neared home plate, an exuberant Anderson tossed off his helmet and briefly backpedaled before embracing his teammates.

Ruiz has stepped up his game from beginning the season in the rookie-level Dominican League to facing the minors’ best in the Arizona Fall League.  However, he has not shown the amount of extra-base production expected of him.  That being said, over his final 10 games in the AFL he slugged .459 with an OPS of .844, so he may have needed an adjustment period to get comfortable.