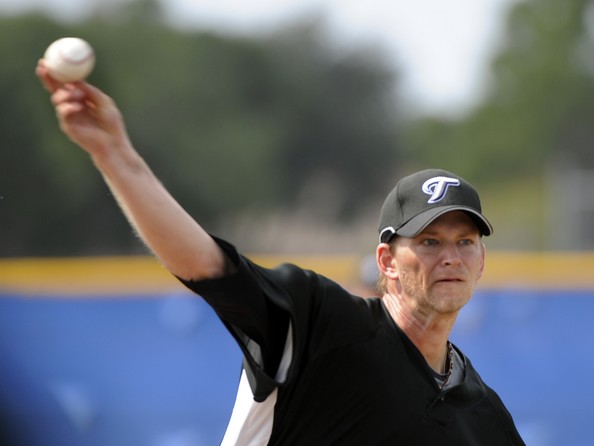 With the recent trades (or ‘salary dumps’) the Jays have made in Scott Schoeneweis and Eric Hinske, there are rumblings among misguided Jays fans that if JP wants to get rid of salary he should be dumping AJ Burnett and his 5 year $55 million contract. Similar thoughts were expressed when JP originally signed his contract. Jays fans had mixed reactions. Some were happy the Jays were actually able to lure a free agent north of the border for the first time in 10 years, others clamoured for JP’s head for throwing down $55mil on a pitcher with a career record of 49-50. The experts said much of the same thing, that the Blue Jays would most certainly perish by throwing that kind of money at a career .500 pitcher. I am in the camp that is in favour of the Burnett signing and I’ll tell you why.

I have followed Burnett since his 2001 season when it became widely known around the league that he had electric, albeit inconsistent stuff. He was able to dial up his 100mph fastball in the late innings and complemented it with a knee buckling curve. The following year Burnett came into his own, tossing 200+ innings with 200+ strikeouts and an ERA of 3.30. Impressive numbers by any standard. He celebrated his coming out party by undergoing Tommy John surgery in 2003 (while the Marlins won the World Series) and missed the entire season. In 2004, he turned in a respectable half-season of 120 innings, 113 Ks, a 3.68 ERA and a sparking 1.16 WHIP. It is widely thought that it takes between 1 and 2 years of pitching post Tommy John surgery to be able to recover fully from the surgery. In 2005, AJ pitched over 200 IP yet again, with 198 Ks and a 3.44 ERA.

After looking at these sparkling numbers, it is obvious that AJ is a rare talent and would be a welcome addition to any team as a premier pitcher. However, you might have noticed that I did not mention his W-L record. He has never won more than 12 games, achieving those win totals in both 2002 and 2005.

By comparison, Roger Clemens, one of the greatest pitchers of all time, turned in a season where he pitched 211 innings, had 185 Ks, had an ERA of 1.87 and a WHIP of 1.00. As far as ERA and WHIP are concerned, it ranks among the greatest single season pitching performances of all time. But Roger’s W-L record for the yearwas a mediocre 13-8. Therefore, he must be a bum.

Obviously I am being facetious, but this comparison is a good one when explaining that pitcher wins and losses are not the be-all and end-all of determining how good a pitcher is. In my opinion, pitchers are at the mercy of their defence and run support. For example, this year (2006) Steve Trachsel of the Mets already has 13 wins and we are not yet finished August. His peripherals however, are much to be desired. He sports a 5.00 ERA, a WHIP of 1.57, and a K:BB ratio of nearly 1:1. He does lead the league in run support, however, with an average of 6.8 runs per game. This begs the question: who would you rather have on your team? AJ or Steve?

As far as JP dropping 55 mil like it is hot on AJ, Jays fans have reacted like he stole their personal life savings. I don’t care if JP sells his first born son Mariano (not a bad idea by the way, the Jays do need to make a few upgrades next year) to bring AJ to Toronto, it’s not my money, it’s Ted Rogers’. I just want to see the Jays kick ass.

In conclusion: AJ Burnett is a huge stud.