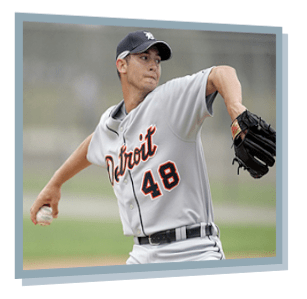 Last season while on a trip to Florida I was lucky enough to see Rick pitch. And he was flat out awesome. His stuff has been discussed on various sites. Here’s a MLB.com scouting report:

His 2-seam fastball is one of the best I’ve seen in person, regardless of level. That’s saying quite a bit considering Porcello was just a 19 year old in High A at the time. Rick led the Florida State league in ERA at 2.66 and had an incredible 64.1% groundball ratio. Some may knock his K numbers (less than 7 per 9) but when I saw him it appeared that he was focussed more on inducing weak contact than going for the strikeout. He could ramp his fastball up to the mid-90’s at will, yet he seemed to be trying to learn on the job instead of just blowing hitters away. This doesn’t shine through in the box scores but it does make a big impression when watching a pitcher live.

Porcello’s make-up also impressed me, once again regardless of age. Tigers infielders were booting clear double play balls all over the diamond (at least three in this start) and there was no sign of panic or frustration. He just took the ball and went back to work.

Porcello is #3 on my prospect list, behind only Wieters & Price. If you’re going to the park or watching the Jays game on TV today enjoy, this could be the start of a very successful career.