I’m Sorry but Dellucci is a Bum 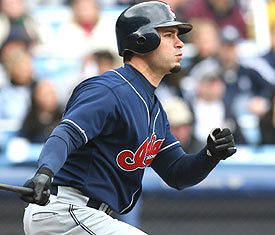 While we do cover the Jays I’m a long time Cleveland Indians fan. Every since my first live Cleveland game back in 1991 (Canadian at par won my father over) I’ve been following the Tribe. From 2007 to the present I’ve had an MLB.TV account. This has allowed me to watch full or condensed Tribe games at a rate of about 40 per seasoon. In some respects I hope this will lend me some credence when talking about David Dellucci, as he played for the Tribe during this stretch.

What the Jays signed was a .230 hitter with little HR pop and a high K rate.

The Jays would be better off looking within to players such as Brett Harper or even searching up and down the waiver wire or even the Mexican League for a forgotten bat. Dellucci won’t give the Jays anything over a .720 OPS production rate (if that). Frankly he’s not worth the time or the effort. Bad signing this time around J.P.