Out of the Park Developments recently sent me a review copy of their iPhone App Baseball Simulator, iOOTP. Does it hit a home run or strikeout?

iOOTP is the smaller brother of the full fledged baseball simulator, OOTP (Out of the Park Baseball). OOTP is a massive game, that effectively turns users into full fledged GM’s. There is even an option for a full 50 round MLB draft. iOOTP takes some of more accessible features of OOTP and puts them at directly at your fingers.

Upon start-up, users have an option of playing modern day, historical or fictional simulations. Everything begins on the one screen. This screen gives users access to inbox features, team management, stats, transactions, etc. 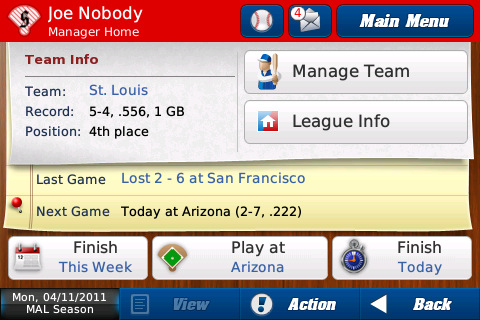 For my test run I choose the modern day option and the 2011 New York Mets. Why the Mets? In sim’s I like to have some cash (which the NY market affords), along with contract flexibility. While the 2011 Mets payroll is rather high, the big money is set to come off the books in the next few seasons.

Note: While I did use the Mets, the majority of images for this article have been taken from the OOTP website and include a Boston Red Sox 2011 sim.

The main game components are:

Players are given a multitude of different rankings. For a batter, there will be contact, power, gap power, eye, etc rankings vs LHP & RHP. Players have many defensive categories as well, such as arm, range, turn DP ability (for infielders), etc. Pitchers rankings include command, stuff, movement, GB%, and velocity, amongst other statistics. 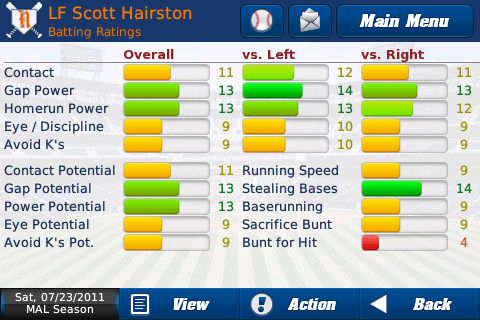 Player Contracts are based upon 2011 MLB pre-season data. For example, Ronny Paulino is making $3.429 million heading into arbitration, rookies make $400K, so on and so forth.

In Game Simulation or PBP (Play by Play)

The game has two options for game advancement. Play a decision based manager mode (switch pitchers, bunt, steal, pitch around, set D, etc) and a sim mode (have the computer sim the day, week, etc). I tried out the manager mode a few times but I found it too slowly paced for my liking. The mode has a mini announcer call the action. For example: 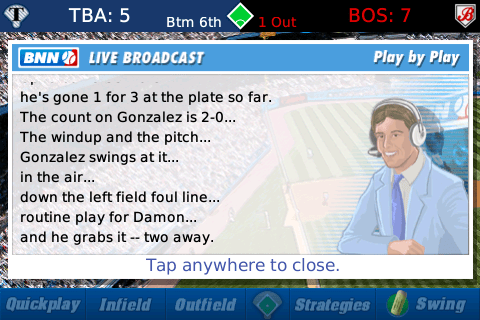 Over the course of a full game this can become tiresome. I did not find an option to speed this facet of the game up. On the other hand, I liked the sim option. Simply advance to the next day and the game has been played. All team and player stats are counted towards year end totals.

Stats can be simple or advanced. The main lineup & pitching screens showcase standard stats (wins, K, era, etc for pitchers, BA, HR, RBI, etc for batters). Within player screen there are multiple stats, including SABER stats such as WAR, Total Zone, FIP, etc, which I find impressive for a handheld app.

The game includes around 25 minor league players per team, a manageable number for a handheld version. (The full OOTP software has full minor league rosters from R-AAA). Within my sim, I set a base MLB roster (vs LHP vs RHP + Rotation & Pen) and called up & sent down a few players. Demoted players become unhappy, as they have playing time expectations. Youngsters are usually happy to be in the show and easily obtain full ‘happiness’ ratings. 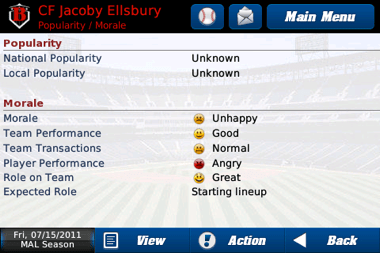 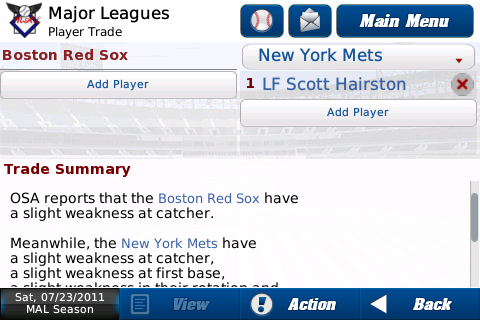 I picked up a cheap player FA here and there (Mike Hessman, Jeremy Bonderman) and began to play. Throughout the season I was able to send and receive trade offers. The recent update created a much needed improvement, a trading block. For the most part, trading is realistic. It’s difficult to send off a poor contract in return for youngsters. The computer AI trades can contain a gem here and there but for the most part are a distraction (no SD, I do not want Eric Patterson for the millionth time!) Trades do not include cash considerations.

Within my NYM sim, I dealt out some of my bigger contracts and set my sights towards rebuilding. 2012 Free Agency was a boon for the Mets, as I picked up Albert Pujols & Jonathan Broxton.

The in-season MLB draft is six rounds. There are a few scouting options here and there but for the most part the draft is simplified into drafting based upon current & future expected skill ratings. 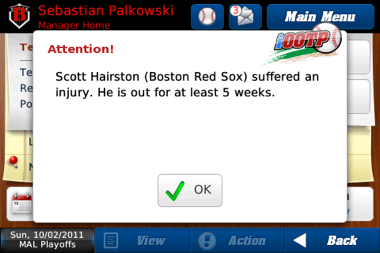 Injuries happen too often for my liking. It can be a pain to receive a message about a players injury, click onto the roster screen, send him to the dl, call up a player and then insert them into the needed lineups. It’s around 6 or 7 actions and can become tiring when injuries crop up all to often. When a player comes off the DL, the process is essentially repeated, as the called up player has to be sent down, the player is brought back up, etc. An injury slider option in the options menu would be a nice touch. You can allow the computer to handle injuries but in this instance you never know who’s getting called up, lineup positioning, etc. 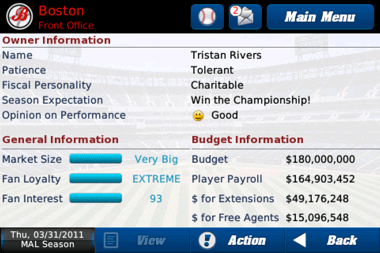 The monetary side of the game has been simplified. The teams owner will set a roster budget for the season. This is a nice feature, as managing ticket prices, concessions, tv contract would be too much for a handheld game (the computer based OOTP contains these features)

Outside of the injuries, my only other issue with the game is the lack of a do-over/repeat button. Some of the player options (call up, send down, release, offer contract, etc) are all within a small pop-up screen. In my sim I accidentally dropped recently acquired Asdrubal Cabrera. I didn’t notice my error until it was too late and it put a damper on my sim.

The positives far outweigh the few negatives for this software. For $5 this software is a no brainer for Baseball Sim fans and is highly recommended.