The Case for Limiting Lind AB

I usually stay away from such obvious post subjects. Babe Ruth had plus power, Randy Johnson had a good slider and Adam Lind can’t hit lefties. These are all givens, aren’t they?

The problem this season is that he’s not really hitting righties either, hitting only 2 HR in 86 PA.

Needless to say the Jays need some production from first base.

The problem with Lind, whether it be vs righties or lefties, is that he’s getting KILLED on low & away pitches of each and every type. He’s a horrid 1-13 vs low and away pitches. In total he’s hitting .109 with only 1 double vs outside pitches. 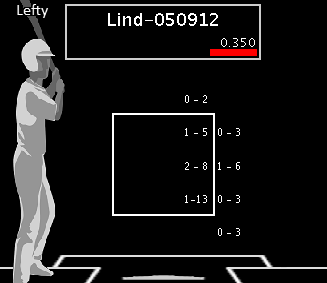 Left-handed hitters can struggle with outside, as we’ve seen with Eric Thames earlier in the season. The MLB average for lefties vs outside pitches in 2012 is .235/.331/.338

So what we essentially have is a hitter that is getting owned by “the book”, is next to useless vs lefties and plays some suspect D over at 1st base.

The solution? Send down a reliever (a lower leverage arm like Joel Carreno) and bring up David Cooper to create a platoon at first base with Adam Lind. This is the feasible scenario, as the Jays are still going to want to extract value from Adam’s contract.

While David Cooper is a lefty batter, he’s posted reverse platoon splits in AAA over the past two seasons.

I personally took a wait and see approach with Cooper last season, wondering whether he really developed a strong batting eye (67 BB vs 43 K last year). This season he has a 14 BB vs 13 K rate. While I don’t expect Cooper to be a slugging superstar, he fits into the Lyle Overbay mold of a gap hitter with power.

The increased walk rate leads to legitimate potential value in Cooper, considering the MLB’s 2012 style of shifting and lower BABIP. The Jays currently have only one player (Kelly Johnson) with an OBP above .330 and it would be nice to have someone turn the order around down in the bottom third of the order.

If nothing else I’d like to see what Cooper can do at the MLB level with a few hundred AB. Can he be a legitimate source of OBP and gap power? There’s only one way to find out and it starts with limiting Adam Lind’s plate appearances.