The Toronto Blue Jays recently completed a 10 player trade with the Houston Astros. The Jays sent over a few veterans and a handful of prospects for three pitchers, with the focus of the trade being left-handed strikeout pitcher JA Happ.

You can find mini bios and breakdowns on the various Jays blogs (which can be found via our link bar at the top of the screen).

Coming up: Statistics vs batters, then a breakdown of each individual pitch, it’s location and expected returns. 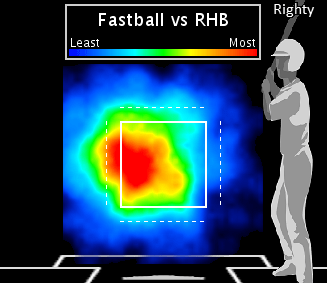 Yikes, .305/.412/.617 line against his Fastball. Within the internal pitch statistics — strike rate, swing rate, that kinda stuff — nothing jumps out as particularly positive or negative.

The problem with the fastball is opponents are able to get the ball in the air. And when they do, they drive it.

So in a nutshell, Happ allows roughly 2 flyball/linedrives for every ball on the ground vs his fastball. For a pitcher with a very high HR to flyball ratio (13.1% on his FB over 2 seasons), this raises a red flag. Deep, dark red. 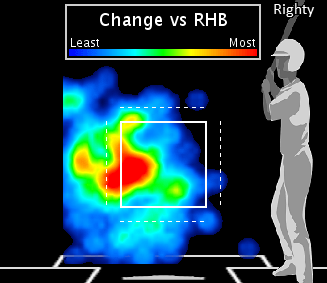 Produces about a 1.0 GB/FB ratio. Like his fastball, Happ keeps this pitch away from righties. He hasn’t been hurt with this pitch, as he has allowed 0 HR with his change. On the flip side, opponents are hitting .311 on the pitch with a reasonable .333 BABIP, hitting the offering into the OF for singles and a handful of doubles. 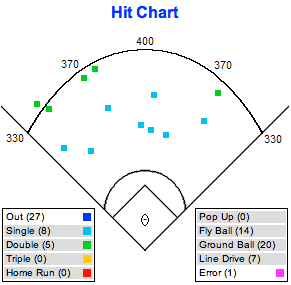 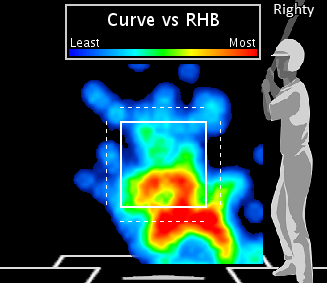 Throw primarily as a chase pitch, Happ likes to bury the curve low & inside. 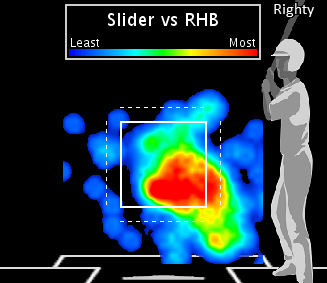 Against RHB he’ll actually throw this pitch for a strike. He’s found a great degree of success with this pitch, holding RHB to a .130 BABIP. Is it just luck? I’m not sure. In 2011 RHB with 1.161 OPS against the slider, although in a small sample of 48 PA.

Conclusion vs RHB: He’s getting killed on his fastball. He limits extra bases with his off-speed offerings. 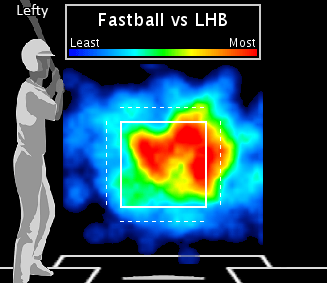 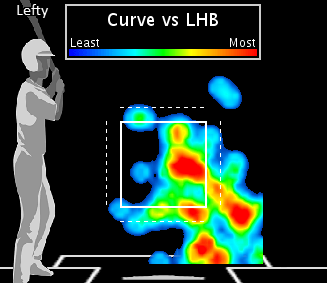 Designed to loop across the zone, the curve is Happ’s strikeout pitch against LHB. He’s done a good job with this pitch, as he has an astronomical 40.9% K-Rate on outcomes on the pitch. 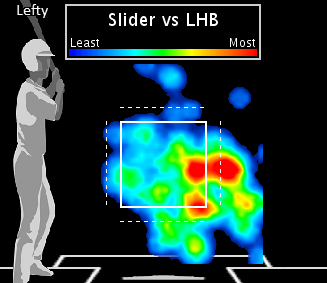 Throw in a similar fashion as his curve, the slider is designed for strikeouts or at worst, weak contact. He hasn’t allowed an HR on the pitch all season.

Conclusion vs LHB: Happ is at his best when facing LHB. He keeps the ball away, and does a great job changing eye levels with a high fastball and subsequent low & away off-speed offerings.

In a nutshell, Happ’s struggles can be attributed to his fastball against RHB.

I discovered an interesting breakdown of the pitch. 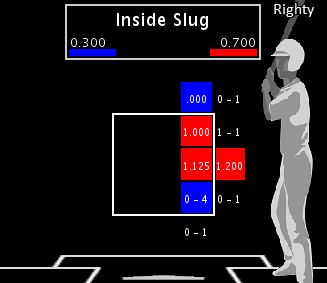 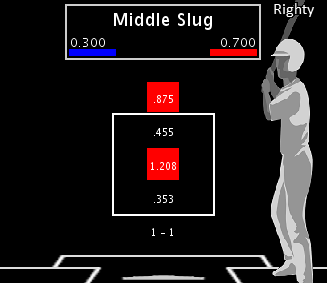 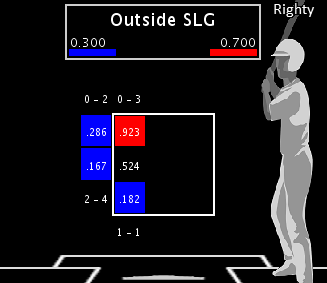 It ain’t pretty but outside location is the clear winner. Yes, I’m going to advocate throwing a pitch that allows a .438 batting average on balls in play. Why? Because it limits the amount of HR allowed.

Happ needs to steer clear of the middle and inside locations with his fastball. I mean entirely. Why risk a mistake pitch?

This scenario will have opposing batters leaning out over the plate. To counter-act this, Happ needs to increase his percentage of curves and particularly sliders (both are thrown primarily inside) for strikes to righties. This late into the season Happ should be interested in merely surviving against RHB. During the off-season the Jays staff can create a more cohesive plan moving forward.

What do you think? Do you like the acquisition of Happ? Do the numbers against his Fastball change your outlook on Happ and the trade in general?