Taken 21st overall and signed to a $1.375 million bonus out of the University of Tennessee, Arencibia is rated as the Jays #4 overall prospect according to Baseball America. In high school he tied Alex Rodriquez’s career record of 17 HR’s at Westminster Christian High. Power is the name of the game for J.P. and it usually comes at the expense of contact. Fluent in Spanish, J.P. is still developing behind the plate. Some believe that his bat may have enough power to warrant a move to 1st if need be in the future.

Plainly what’s killing J.P. is his lack of plate discipline. He’s taken two walks in over 100 plate appearances. The 2 – 24 BB/K ratio isn’t anything to write home about either. Very few slug over .500 in the Florida State League and J.P. has a .442 mark, which is a good sign. A change in approach and/or possibly mechanics could help Arencibia. His stats last season weren’t too hot either.

According to the Baseball America scouting report J.P. is a below average runner but I didn’t see it that way. He hit a double and had good speed and corning rounding the bases. Better than Travis Snider in-fact. I don’t see him stealing any bases but he shouldn’t clog up the base-paths as some predict.

Its too early to make a call on Arencibia. He’s not fairing too well in the pro ranks currently but his power potential makes him one to watch.

I filmed both of these at-bats on April 7th 2008 in Dunedin. The level of play is High A.

I got things rolling too late during this at-bat and J.P. jumped on the first pitch. So this video clocks in at a mighty three seconds.

The second video is longer and gives you a better indication of his stance and swing. 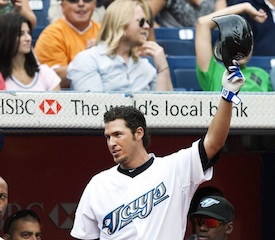