As Toronto Blue Jays fans are gearing up for the home opener I decided to drop in this little post on J.P. Arencibia’s strong defensive showing over the first two games of the season.

In game one J.P. was blocking balls left and right, throwing out would be base stealers and tagging out runners at home.

In game two there were fewer standout moments and even a wide throw to Lind at 1st that ended up costing the Jays a few runs. But I think it could be argued that game two was just as, if not more so, impressive for J.P.

In the off-season Mike Fast (since hired by the Astros) presented his very popular catcher framing research. The gist is catchers can save or cost their pitchers runs by the way they frame pitches. To say that this research made the rounds in the baseball world is an understatement. Even David Cone of the YES network was cracking the study out on the air during the Yankees season opener vs the Rays (and framing superstar Jose Molina).

According to this research J.P. was one of the worst catchers over the past two seasons, worth an adjusted -12.9 runs due to his framing.

But at least for the first two games of the season, J.P. did a great job framing pitches.

(The following heat maps are of called strikes and are provided by ESPN TruMedia.)

In game one Arencibia was able to earn numerous calls for Romero, mostly to lhb but he also framed a few pitches against righties. 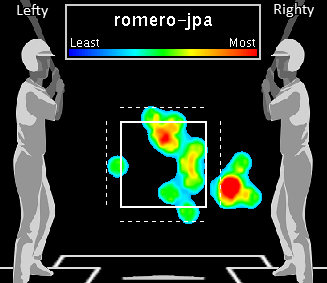 In game two, where the Indians loaded up on lefty and switch hitters, J.P. and Brandon Morrow owned the outside portion for called strikes. We’re taking way out of the zone. 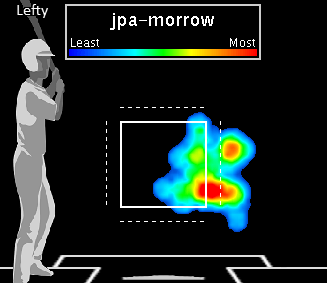 Now pitchers of Romero and Morrow’s stature will get a little leeway. Here’s a called strike map for Joel Carreno’s game three start vs LHB & RHB. Jeff Mathis was behind the plate. 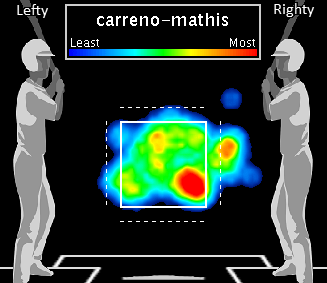 So far, so good for Arencibia. As with anything else, sample size rules.

Sunny Side of the Street: If nothing else, J.P. is an extremely hard worker when it comes to the defensive side of the game, which gives him a chance at continuing his early framing success. I’ll keep my eye on this trend and see where J.P. stands at the end of April.

Arencibia had a really hard time handling Alvarez’s slider in game #4. Frankly, he was flailing his glove at the pitches. This made me think back to earlier in the season. I originally came up with the premise for this article after J.P. did a great job framing Morrow’s fastballs in game two. Was Arencibia’s early success due to his framing of fastballs?

I went back to see how he handled ‘soft’ off-speed pitches (changes, sliders, curves, etc) in his first three starts behind the plate. The red spots are were the soft pitches ended up, all were called balls. 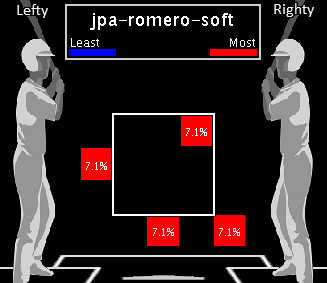 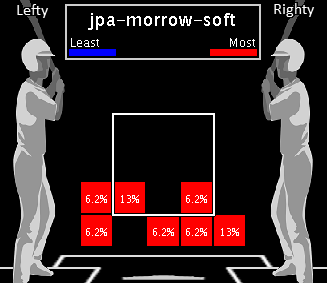 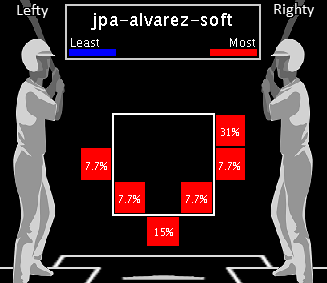 Hardly conclusive, although J.P. is giving away strikes at the bottom of the zone on off-speed pitches.

Once again, I’ll keep my eye on this development and create another post at the beginning on May. I’ll also add Mathis into the mix.