A couple of days back the Toronto Blue Jays avoided arbitration by inking Shaun Marcum to a $850,000 one-year contract. With the departure of Doc, Marcum is now the salary leader of the Jays staff.

At any time during the season the Jays will spend right around $2.5 million in salary on the current starting five. (four MLB minimum-ish level starters + Marcum)

The interesting thing here (besides the entire Jays staff making the equivalent of five 2010 AJ Burnett starts) is that the rotation will be under control for the foreseeable future. Free agency doesn’t kick in until a player has reached six years of service time. Here comes a service time graph 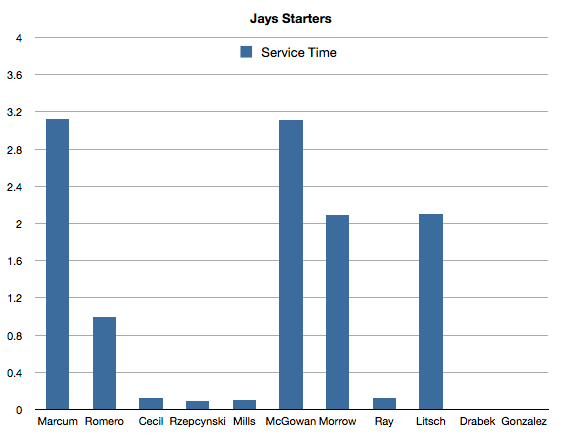 Everyone on our list will be under team control in 2011 & 2012. After that only Marcum and McGowan will be free agent eligible (as they both currently enter 2010 with three+ years of service time). Come 2013 only Litsch will be free agent eligible (Morrow will likely spend at least a month in AAA at the start of 2010 to milk his arbitration clock).

While the Jays have no real staff ‘ace’, they do have a mixture of 2’s and a handful of back of the rotation level starters. If they can find a way to contend in late 2011 or 2012 they should have the financial leverage to bring in a free agent or trade for a high salary pitcher to round out the rotation.