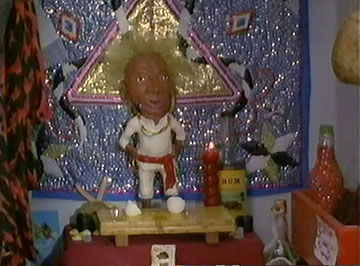 A slight twist on an established stat, BABIP but with HR left in place.

The only change made to equation is dropping out HR from both sides. By allowing HR’s to count within the average, the new stat takes into account every at-bat that does not end with a walk, hbp or sacrifice hit. We could sub SH back into the equation but the results are negligible (plus it takes away from the simplicity of subtracting only HR from the original BABIP equation) 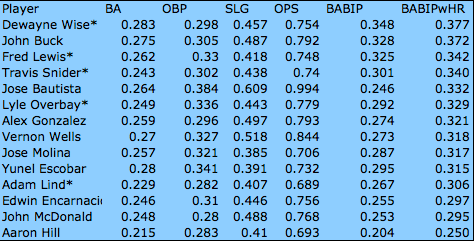 Naturally, players that hit the longball receive a boost from this stat. Jose Bautista gains 86 points (.332 up from .246) when HR are included.

Obviously on the flip side slap hitters such as Wise, Molina & Escobar gain fewer points on a percentage basis.

Using straight BABIP only four Jays (Wise, Buck, Lewis, Snider. Escobar is a near miss at .295) place above the AL Average of .296.

When using BABIPwHR seven Jays are at or above the AL BABIPwHR Average of .321 (Wise, Buck, Lewis, Snider, Bautista, Overbay, Gonzalez. Just missing out at .318 is Mr. Wells)

At the end of the day “this stat ain’t perfect”, although it is pretty interesting to see the Jays players eke up the closer to league average once Home Runs are included.