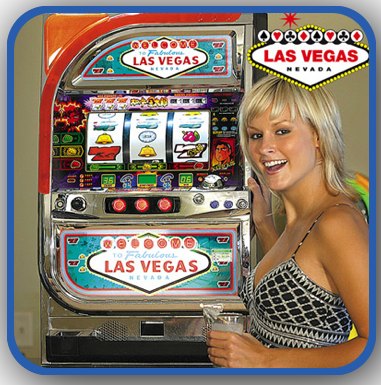 The Monday evening draft signing deadline line has come and gone. The result? Arguably one of the finest drafts in Toronto Blue Jays History.

Now how in the world can I proclaim this as one of the best Jays drafts of all-time? Could the players flop? Well of course they can. The 2010 draft was good, no great, because of the process and ultimate net result.

The only top 15 pick that got away was lefty Logan Ehlers, whom we profiled on Monday. 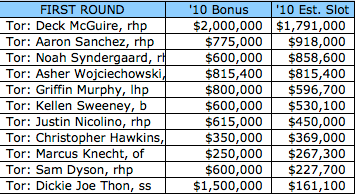 As we can see, the Jays ended up shelling out some considerable cash. At the time many pundits (including myself) questioned some of the early picks, including Aaron Sanchez and especially Noah Syndergaard. In retrospect it’s now easy to defend these picks due to:

A. Clearly the Jays drafted based upon merit, judging by their spending habits later in the draft.

B. Secondly, by ‘reaching’ early in the draft the Jays were able to save some cash for later in the draft, by going below or staying at slot for picks 2 – 4. 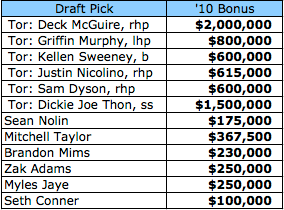 In total the Jays went over slot 12 times. Obviously the $1.5 million to 5th rounder Dickie Joe Thon stands out, as well as the payout to Sam Dyson, Griffin Murphy and Deck McGuire.

Sticking to the ‘Plan’

AA has spent considerable money at the draft, during the international signing period, has extended core assets such as Ricky Romero and has chosen standout Tools over Sabermetrics. The Plan is in full effect.