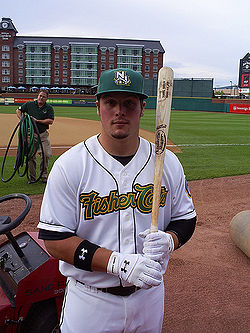 Not too long ago, Kman wrote an article on Travis Snider, a hot shot Jays prospect.  The Baseball Prospectus just released their top 10 Jays prospect list and Snider ranks #1. While we were unsure of his defensive prowess, BP clears it up for us.

Travis Snider, RF
DOB: 2/2/88
Height/Weight 5-11/230
Bats/Throws: L/L
Drafted: 1st round, 2006, Washington HS
What he did in 2006: .325/.412/.567 at Rookie-level (226 PA)
The Good: Best high-school hitter in this year’s draft, with tons of projection and plenty of present skill. Swing is smooth, fast and powerful, leading to consistent hard contact to all fields. Excellent plate discipline and pitch recognition. An outstanding worker who is driven to get better.

The Bad: Snider is a touch short and squat, and he’ll need to watch his conditioning. His hitting skills are his ticket to the majors, as he’s a slow runner, but a decent outfielder with an OK arm. Nonetheless, he probably profiles better in left field than in right.
The Irrelevant: While Snider has just six at-bats as a professional with the bases loaded, he already has a pair of grand slams.

In a Perfect World, He Becomes: A star-caliber corner outfielder with well-above-average numbers in all three triple-slash categories.

Gap Between What He Is Now, And What He Can Be: High. Snider’s MVP showing in the Appalachian League was an eye-opener, as while everybody loved his hitting skills, some believed he would take time to adjust to pro baseball. With that out of the way, the sky is the limit as Snider makes his full-season debut in the Midwest League.