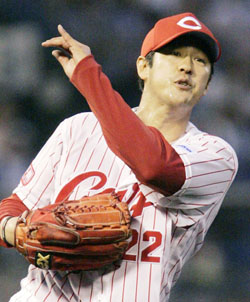 Remember when JP hired all those new scouts and said that now he will have the resources to maybe get a lefty arm from Japan who could be a middle reliever or a 5th starter? Well it looks like that self fulfilling prophecy has come to pass only a few short days later.

Left-hander Ken Takahashi, who declared himself a free agent from the Hiroshima Carp with the hope of playing in the major leagues, has agreed to a minor league deal with the Toronto Blue Jays, his agent said Monday.
Takahashi’s agent Go Nakanishi said Takahashi, who hopes to earn promotion to the majors, has received an invitation to the team’s spring training camp. His contract is for one year.

Takahashi is a fairly typical lefty with a high leg kick. Below is footage of him playing for the Hiroshima Carp.

FYI he strikes out Hideki Matsui at 2:18, if that means anything to you.