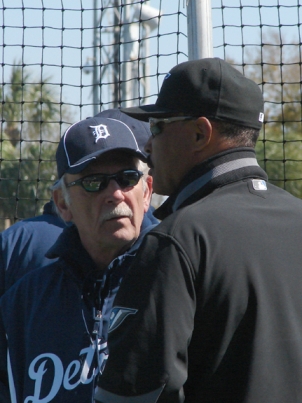 All in all, not the most exciting affair.  Plenty of offense, a little sloppiness and a Bubbie Buzachero appearance.  That’s about all you can ask for.  Brett Cecil looks pretty far behind and Rzep made a few mistakes.  Dopirak and Ruiz looked well today and Hoffpauir cemented the fact that he is a defensive liability. For the Tigers, Jacob Turner impressed as did the speed of Gustavo Nunez.

3:56 Reed flies out to LF for the first out of the inning.

3:53 Diaz mercifully grounds out to 1B.  We go to the top of the 9th. Who will close it out for the Tigers?

3:52 That’s a double for Dlugach. Robinson Diaz at bat.

3:50 Castro walks. Dlugach up. Base hit puts the Tigers ahead.

3:48 Cito, not looking too impressed, comes out to talk to Bubbie. Chat lasts about a second and a half. Bubbie stays in.

3:47 Bubbie tries to nibble and walks Boesch. Jeff Larish up.

3:46 Buzachero’s fastball topping out at 87mph.

3:45 Buzachero pounds the zone with junk and gets Wilken Ramirez to fly out.

3:43 Bubbie Buzachero sighting! On now in relief of Brett Cecil.

3:40 Ciriaco hits it to the warning track but Aguila is there to track it down. 1 out.

3:37 Nunez has crazy speed and is on with an infield hit.

3:35 Gustavo Nunez at bat.  Brett Cecil still in the game for the T-Dot.

3:29 Aaron Matthews is also subbed in for Travis Snider now.

3:28 The previous hitter was JP Arencibia, with the base hit.

3:26 Enrique Gonzalez back at it again. A leadoff base hit for the “Toronto Player” as we are treated to another pointless interview with Alex Avila.

3:23  The Tigers’ hitter grounds out to end the inning, whoever he was.  These Tigers announcers are kinda sorta bad.  Not as bad as you know who but I would like to know who is up to bat, who is being substituted etc. etc.

3:22 Looks like the relief pitcher Gonzalez was Enrique, if anyone cares.

3:20 Cecil strikes out Brent Dlugach on what looks to be a slider. 2 out.

3:18 Cecil is all over the place as Castro works a walk.

3:16 Cecil strikes out Jeff Larish swinging for the first out.

3:15 It looks like he crushed a Cecil changeup and swung with only one hand!

3:13 Cecil still in for the Jays. Brendan Boesch leads off for the Tigers.

3:10 Gonzalez in to pitch for the Tigers against Chris Aguila.  His first name? Yo no se.

3:07 Sorry I have a coworker bugging me. It would be nice if she would leave me alone so I would know whats going on.  Travis Snider just walked.

3:00 Emaus flies out to Casper Wells 2 out, 1 more until the 7th inning stretch.

2:58 Hoffpauir leads off for the Jays.

2:56 Cecil gets Wilken (?) Ramirez to strike out to end the inning.

2:54 Sizemore gets one in his wheelhouse and strokes the fastball for a double.

2:53 How useful is this outing for Cecil when all the Tiger hitters know what is coming and are just waiting on the fastball in the zone?

2:51 The calamity of errors continues with a throwing error from Brett Cecil to 1B.

2:49 Ugh. Classic Spring Training play. One of the Tigers hitters – who knows, Damon is still running his mouth – hit a double down the line.  Casper Wells tried to score but was out by a mile.  However Molina flubbed the throw and he is safe.

2:48 Doesn’t look like Cecil will attempt any curves yet. All gas so far.

2:46 Same play, only this time Hoffpauir with a throwing error. 9235th of the Spring.

2:45 Pointless interview with Johnny Damon.  Whoever was up for the Tigers grounded out to Hoffpauir.  A lefty pitching for the Jays – looks like Mills.

2:41 Here come the subs for the Tigers: Ramirez for Damon, Boesch for Ordonez, Larish for Cabrera.

2:39 Molina hits a high chopper to SS and is unable to cash in Aguila. 2 out.

2:37 Aguila slides in to 3B with a wind blown triple off the RF wall.

2:36 Travis Snider grounds out to SS but shows some surprising wheels in the process.

2:32 Ruiz, Dopirak, Snider should get the call unless they are pinch-hit for.

2:28 Damon works a walk from Janssen, who is a little wild  early on.

2:27 Casey Janssen in for the Blue Jays to face Johnny Damon.

2:26 By the way, Brent Dlugach is playing 3B right now for the Tigers and he bobbled the Emaus grounder.

2:25 Jeremy Reed lines out to SS to end the threat. Home half of the 5th coming up.

2:21 Turner all over the place now, Avila comes out to settle him down.

2:21 Turner loses Hoffpauir on an inside fastball for the BB.

2:19 Pastornicky flies out to RF for the first out of the inning.

2:16 In theory, Pastornicky, Hoffpauir and Emaus are due up in the top of the 5th.

2:15 Sizemore steps into one but it dies at the track and into Aguila’s glove in CF. Inning over, Rzep works out of the jam.

2:14 Gustavo Nunez strikes out looking on a Rzepczynski breaking ball on the outside corner. 2 out.

2:11 Casper Wells hits one just beyond the reach of Travis Snider.  It rolls to the wall, Avila is held up at 3B.

2:08 Inge leads off and Rzep still in for the Blue Jays.

2:06 Molina strikes out looking at a very nice bender from Turner.  He looked good but the Jays helped him look good – he won’t get away with throwing 93mph straight fastballs at the big league level.

2:03 Snider strikes out – of course! Aguila follows up with a fly out for the 2nd out of the inning.

2:02 Turner is advertised as a fireballer. First pitch is a 91mph fastball to Snider.

1:59 Guillen flies out to end the inning.  We’re off to the top of the 4th.  Snider, Aguila, Molina due up for the Jays but.. you never know.

1:57 Rzep flashes his nasty slider and fools Carlos Guillen on it for strike 1.

1:55 Maggs grounds out to Hoffpauir at 3B who makes a strong throw to 1B.  2 out with Miguel Cabrera up.

1:53 Looks like Damon got out, somehow. Maggs is up.  Leyland still waggling his tongue.

1:50 Dopirak goes down on strikes yet again to end the inning.  He’s not looking like the golden child that he was last season.

1:45 Jays swinging early and often. Reed lines one off the 1B glove, is out at 1B on the force but Emaus to 2B. Ruiz at bat.

1:43 Hoffpauir follows that up with a double down the line. Pastornicky to 3B.

1:42 Galarraga is obviously no McGowan.  Pastornicky rips a bullet up the middle for a base hit.

1:41 Pastornicky, Hoffpauir, Emaus due up for the Blue Jays.

1:40 No matter, Sizemore strikes out swinging.

1:39 Sizemore battles back to a full count after being down 0-2.

1:35 Rzep throwing what look to be strikes, not all of them being called that way.  Casper Wells hits a base hit to LF.

1:34 Avila grounds out on the first pitch from Rzep. Groundballs!!

1:32 Molina hits a flare and that’s all for the Jays this inning.  You’ll have to wait with baited breath for Pastornicky next inning…

1:31 Jose Molina at bat.  Taylor Pastornicky – who was dominated by Dustin McGowan in his simulated game – is on deck.

1:23 Randy Ruiz leads off for the Jays

1:20 Inge flies out to end the inning. Rzep fooling no one. Well, except Ordoñez.

1:17 Rzep flashes a plus breaking ball but gets squeezed on the call (it is Spring Training for umps too!) Next pitch strikes out Ordoñez. 1 out. Cabrera up.

1:13 Just as I say that… next pitch is left up and Sizemore crushes it for a HR.

1:13 First pitch from Rzep is perfect – a strike low and away. He will be successful if he can live there.

1:12 Sizemore, Damon, Ordoñes to lead off for the Tigers.

1:10pm Galaragga’s PFP has paid off as he gets Jeremy Reed on a short chopper. 1-2-3 inning for Armando.

1:09pm Emaus follows suit with a flyout to Casper Wells in CF.

1:02pm Starting for the Jays is Mark Rzep and for the Tigers it is Armando Galarraga.

12:50pm As long as we’re not blacked out, we’ll be liveblogging the game in 10 minutes.