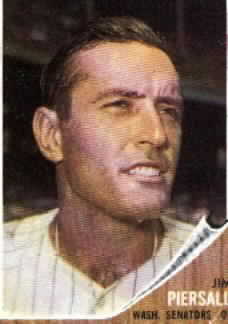 There are a great many interesting baseball players throughout the history of the game and you can read about many of them in our bio section.  However, there may not be a more interesting player than the colourful Jimmy Piersall.

Jimmy Piersall is a former centrefielder for the Boston Red Sox, Cleveland Indians, Washington Senators, New York Mets and California Angels.  Although a superb ballplayer, it was his mental illness that defined his career.  Piersall played with bipolar disorder/manic depression, a condition where periods of excitability and high energy alternate with profound sadness. 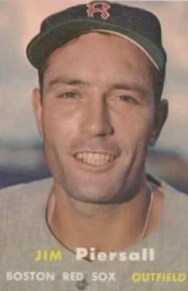 Jimmy was born in Waterbury, Connecticut on November 14, 1929.  He began his professional baseball career at the age of 18, signing with the Boston Red Sox in 1948.  He would reach the majors 2 years later in a September call up at the age of 20.  He played in 6 games.

In 1952 he became the Red Sox starting centrefielder and began to refer to himself as “The Waterbury Wizard.”  The kind of cockiness and swagger displayed by the rook chafed the veterans on the team. This was  just the beginning of clubhouse strife with Piersall at the centre.

Piersall began to unravel early on in the season.  Before a game against the Yankees on May 24, Piersall goaded Yankees infielder Billy Martin into a fistfight.  Following the scrap, he fought with teammate Mickey McDermott in the Red Sox own clubhouse.  Subsequently he was removed from the lineup and broke down crying on the bench.

Piersall’s behaviour grew increasingly bizarre.  Ironically enough this helped a great deal towards endearing himself to the Red Sox fans – some of them even paid his fines!  He ran up the screen behind home plate. When running to first base, he would spread his arms like he was an airplane.  In the batter’s box he would drop his bat and imitate the pitcher’s motion.   He would leave the plate and run to first and whisper to a runner. On June 28th, Jimmy Piersall was sent to the minor league Birmingham Barons to get straightened out.

In only 3 weeks in Birmingham, Piersall was ejected from games 4 times.  On one occasion during an at bat following one in which he struck out, Piersall brought a water pistol with him and sprayed the plate.  “Maybe now you can see it,” he said to the umpire.

Following the incident he received a 3-game suspension.  At the urging of the team doctor, Piersall agreed to enter the mental health facility in Westborough State Hospital in Massachusetts.  Piersall was diagnosed with “nervous exhaustion” and received electroshock therapy.  It resulted in severe memory loss; Piersall was unable to remember most of the previous year.  In addition to the electroshock therapy,  Piersall received psychotherapy counselling which he claims helped him a great deal.

The Red Sox rallied to his support – in a way that is unusual even today.  His teammates visited him in the hospital.  He thought his career was over, but the Red Sox brought him back for the 1953 season.  They paid the expenses for his recovery, including recuperation and coaching in Florida.

Although on the surface it appears to be an altruistic move by the Red Sox, the situation might have been different had Piersall not have been an incredibly fine ballplayer.  Teammate and Hall of Famer Ted Williams called him one of the best outfielders of the 50s and 60s. Yankees manager Casey Stengel said he was the best right fielder he had ever seen.  “He’s great, but you have to play him in a cage.”

When in centrefield, Piersall was widely considered the best defensive player at his position during the time that he played.  He was a thinking man’s centrefielder; he had exceptional anticipation and positioned himself perfectly for each hitter, he got great jumps on the ball and had an outstanding throwing arm (before injuring it in a throwing contest with Willie Mays.)  A teammate of Piersall’s in 1959, Tito Francona recalled a time when Piersall was showing him the ropes of centrefield.

When Francona replaced Piersall in center for Cleveland in 1959, Jimmy would stand in the bullpen and position him. Once, with Elston Howard of the Yankees up, Piersall told Francona to move toward right center. Francona, figuring the right-handed Howard would pull the ball against the pitcher, who did not have much speed, shifted toward left center instead.

But Howard hit the ball to right center. “That’s the last time I didn’t listen to Piersall,” Francona said.

Piersall received an outpouring of support and praise from his loyal fans upon his return.  In his first game back with the Red Sox he went 6/6 – the first Red Sox player to have 6 hits in a single game in franchise history.  He played 153 games that season and finished 9th in MVP voting.  Recalling that period in his career, Piersall stated: “Probably the best thing that ever happened to me was going nuts.  Who ever heard of Jimmy Piersall before that happened?”

This was a unique situation because mental illness was not as well understood and had a much greater stigma attached to it in the 50s than it does now. At that time it was usually kept hidden, but in Piersall’s case,  his struggle was documented publicly.

The following season Piersall told his story on a television show.  “I did it to get it off my chest,” he says. “It was one of the best things I did to get better.”  Piersall extended his talk into a 2-part op-ed in the Saturday Evening post, titled They Called Me Crazy – and I was. He was quoted as saying “Mental illness is no different from any kind of illness.”  This was a powerful anti-stigma message that was delivered nation wide – a message that was ahead of its time.

He then went on to author 2 books on the subject: Fear Strikes Out, based on his public battle with bipolar disorder (you can read some of it here) and The Truth Hurts. A movie was adapated based on Fear Strikes Out, but it is only loosely based on Piersall’s life.  Jimmy doesn’t approve. 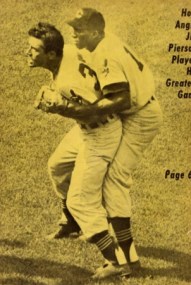 Was Piersall “cured” from his manic depression? Maybe… maybe not.  Piersall was traded to the Cleveland Indians in 1958.  Teammate Tito Francona said “Jimmy was smart as a fox.  Every time he got kicked out of a game, he made more money. People sent him money to pay his fines. I remember a game in Yankee Stadium where he ran to second base and did jumping jacks. Then he ran behind the monuments and sat down.”

Teammate Rocky Colavito remembers the time he was playing next to Piersall in the Indians outfield in old Tiger Stadium vs. Detroit. “He was in center and I was in right.  All of a sudden, I saw him running to the 395-foot sign in center where two fans were sitting by themselves. He came back laughing. I asked him what happened and he said, `Those two guys have been yelling at me through the whole game. I just spit in their face.'”

In June of 1960, Piersall threw both an orange and a baseball at Comiskey Park’s exploding scoreboard. Later that month, he threw a bat at Yankee pitcher Jim Coates after Piersall was thrown at for supposedly timing Coates’ warm-up pitches. He later wore a little league helmet during an at-bat against the Tigers.

He once stepped up to bat wearing a Beatles wig and playing “air guitar” on his bat, led cheers for himself in the outfield during breaks in play, and “talked” to Babe Ruth behind the center field monuments at Yankee Stadium. In fact, the most memorable of Piersall’s on-field antics occured in New York.

Two incidents happened within three weeks of each other in 1961, both in Sunday doubleheaders against the Yankees.

Before a crowd of 56,307  in Yankee Stadium, a burly fan climbed over the fence and ran at Piersall in center. The fan claims to have wanted to shake his hand. “You touch me and I’ll kick you in the rear,” Piersall said, reasoning the man could have a knife. The fan squared off at Piersall, then ran. Piersall kicked him in the rear. 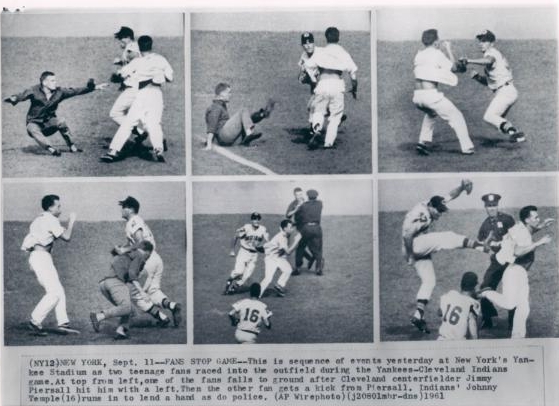 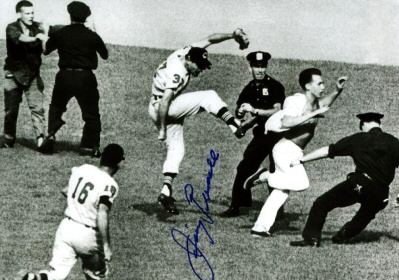 The next incident took place in front of 57,824 at Yankee Stadium. Two teenaged fans, aged 17 and 18, were berating Jimmy Piersall’s teammate, Vic Power.  When Piersall shouted in defense of Power, the teens charged over the fence, calling Piersall a nut and throwing punches. Piersall defended himself well, dropping one of the teens with a strategically placed punch to the face as teammate Johnny Temple and police helped out.

“I didn’t mind if they yelled at me,” Piersall said. “But when they came on the field, it was a different story.”

Piersall refused to press charges after the skirmish. “I’ve had 117 fights and that’s the first time I’ve ever won,” he said.

After these incidents against the Yankees, Indians team physician Donald Kelly ordered psychiatric treatment on June 26.

“That boy is sick” remarked Satchel Paige, one of the few ballplayers who had an inkling as to what was really going on.

After a brief absence to deal with more “nervous exhaustion,” Piersall was back and up to  his old tricks.  When facing his former team, the Red Sox, Piersall was ejected for the 6th time after running back and forth in the outfield while Ted Williams was at bat.  He had to meet with the Comissioner and it seemed to settle him down.  For a while.

He came back in the 1961 season to hit .322, finishing 3rd in the batting race while winning his second gold glove.  But his antics still didn’t stop.  In the fifth inning of the June 23 game against the Philadelphia Phillies, Piersall ran the bases while facing backward (though in the correct order) after hitting the 100th home run of his career off Phillies pitcher Dallas Green. 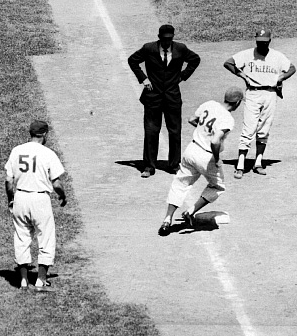 Piersall retired with the California Angels and then went on to a career in broadcasting.  Bill Veeck, then-owner of the Chicago White Sox and lover of spectacles and flamboyancy, hired Piersall to cover Sox games.  Piersall was as controversial on the air as he was on the field, much to Veeck’s delight.  However, Piersall’s act began to wear thin.  When Piersall criticized White Sox slugger Greg Luzinski for failing to run out a grounder, Luzinski threatened not to re-sign with the club if Piersall remained on the job.  Umpires threatened to forfeit a game against the White Sox in 1981, saying Piersall’s taunts in the broadcasting booth were inciting the crowd.  That same year Piersall was suspended for calling baseball wives “horny broads.”  He was fired shortly after for being too critical of the team and its management.

“I have not made an awful lot of friends in my lifetime,” Piersall said. “But my dad once told me that if you have too many friends you become a follower.”

Piersall is still in radio, hosting a sports-talk show in Chicago three times per week where he continues to freely rant.  He spends his winters in Arizona with his second wife, Jan, to whom he has been married for 20 years.  He says he is set financially.

“I’m the gooney bird that walked to the bank,” he said. “I’m doing better than most of those guys who said I was crazy.”

When looking back at his career, Piersall prided himself most on getting opposing players angry, hoping to distract them. “Now the players pat each other on the ass,” he said. 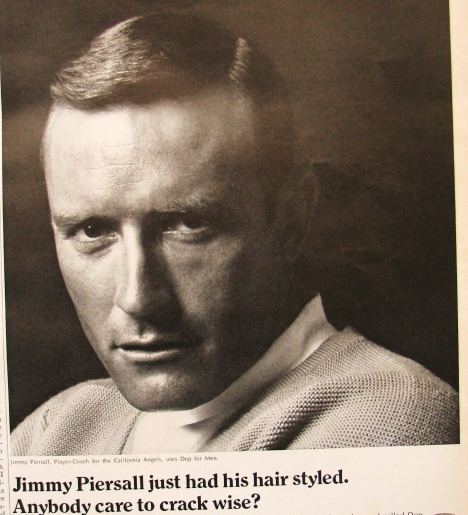