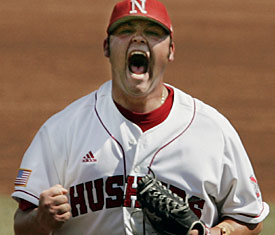 We at Mop Up Duty have been following Joba the Hut since this past winter where he played in the Hawaii Winter League.  Now that he is about to be or has been called up by the Yankees with the DFA of Mike Myers, I am concerned (actually hoping) about Joba getting injured because of the workload placed on the young pitcher.

ESPN’s Keith Law saw Joba at the Future’s game and had this to say:

That’s JAH-buh. Get used to it, because as long as he stays healthy he’s coming quickly. Big, imposing guy with about as broad a set of shoulders as you’ll see on anything smaller than an elephant, and big league stuff — 92-96 mph fastball with an out-pitch 83-85 mph slider that had good tilt. His fastball command was so-so, but he really nails the slider. The one caveat is that his delivery isn’t great, with some length in the back, some effort required, and a weird finish in which he pulls his glove hand in hard, and I wouldn’t be shocked if the fastball command never got to the point where he can start in the majors. And I wouldn’t be surprised if his stuff is so good that it doesn’t matter

With Joba being a young man of 22 years of age, it is important to monitor his innings workload.  Being a power pitcher, Joba possesses an impressive arsenal of pitches which include a fastball that tops out at 99mph and a devastating slider as his outpitch.  He also has an above average curve and changeup. These pitches put a strain on his young arm and we need look no further than Felix Hernandez to see what can happen when a young power pitcher is worked too hard too fast.

Couple these with the fact that Joba has battled weight problems (tipping the scale at 300lbs on his 6’3″ frame in college) and arm injuries and one would think it is important to baby him like the Jays should baby AJ Burnett.

Joba has pitched about 90 innings in AAA this year (as a starter) which seems reasonable and not out of the ordinary to bring him up as a reliever with 2 months of the season left to go.  But, when you consider he has pitched 40 innings during the winter in Hawaii and add in his spring training workload and you would have to think it might be prudent to perhaps keep him on a strict pitch count and not mess with his arm by converting him to a reliever who works back to back days midway through the season.  Add to the fact that Joe Torre has notoriously abused the hell out of his relief corps (save Mariano) and this is a recipe for disaster. I hate to see a young prospect’s arm shattered into pieces (you heard it here first – Wild Proclamation) but since it is a Yankee, I won’t lose too much sleep.