…believe the jays have been making it very easy for the Umps to slant those very close calls against the jays. I mean its just human nature. Jays (BAUTISTA!) need to reign in their demonstrative responses. Bautista for one is not getting nearly as many calls and nearly all borderline pitches seem to be called strikes which seems the opposite of the past year or so.

I looked into this. And it appears the Jose is crying wolf, as the umps have been pretty fair with him all season; 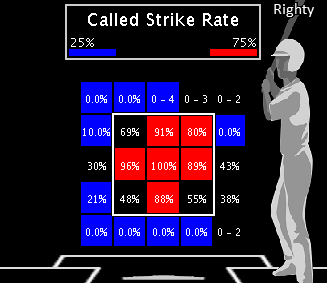 After looking over a few statistics, I tried to figure out what’s going on with Jose’s diminished productivity. The answer may be as simple as letting too many good pitches pass him bye.

The following heat maps include the swing percentage for pitches in each specific zone, regardless of outcome. Ie 2 for 10 means he swung (foul, missed, hit) at 2 of 10 pitches in said zone.

In 2010 Jose (54 HR) swung at most pitches in the middle, inside portion of the plate. ISO is isolated power, which in short is a raw power stat. MLB average is around .150. 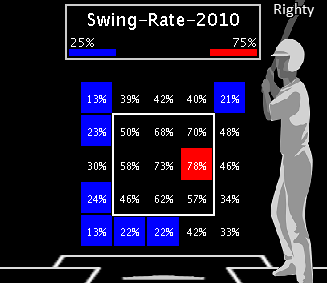 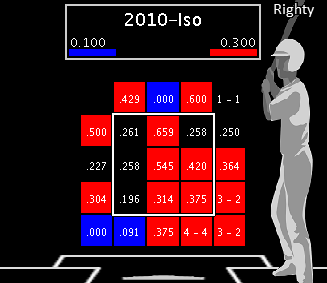 2011 Jose (43 HR) watched his ISO & swing percentage drop inside but this was off-set with a great approach against pitchers new plan of attack, which was to pitch him away. Notice the 40%-ish swing rates in 2010 & 2011 high and out of the zone. 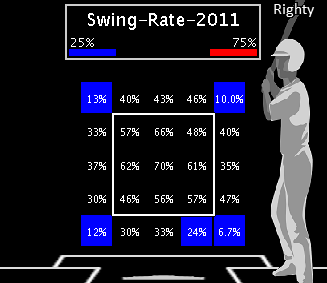 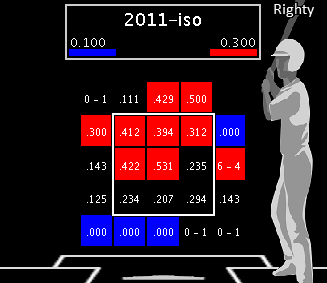 Fast forward to 2012. And Jose is letting some really good pitches go bye, as the swing rate in the middle level is down across the board, including a very disturbing 63% swing rate vs pitches down the middle. And the chase rate of high pitches out of the zone has skyrocketed to 67% & 63% in two locations. His ISO has suffered across the board. 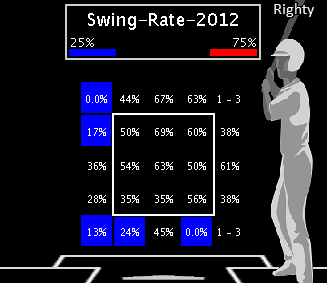 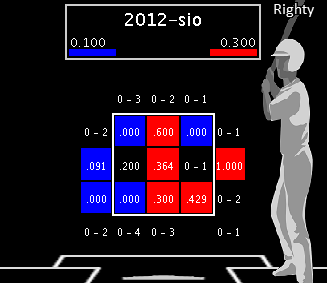 On the surface increasing Jose’s lower BA and ISO seems like an easy fix. Lay off the high stuff and start ripping at pitches down the middle & middle away, a source of ISO. I’m sure there’s more to it than that. Still, I’d like to see the swing percentage in key locations come up.

Coming next week: A short bio with video of a potential 100 SB player.