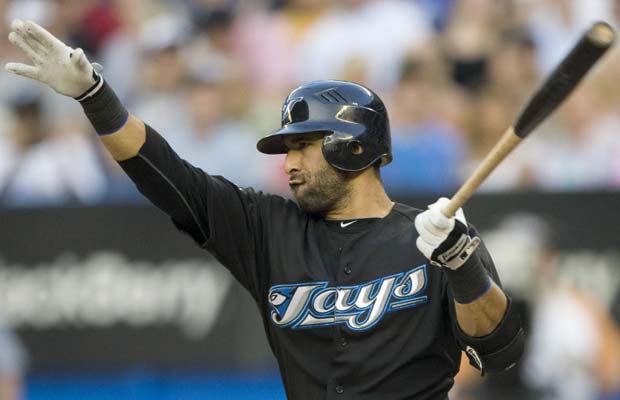 Can Jose adjust to the adjustments?

I’m at the point where you’ve read about 100 different blog posts on Bautista’s 5 year, $65 million contract. Everyone has beaten to death WAR, wOBA, forward inflationary adjustments,etc. So I’m just going to flat out skip my version of contract analysis. (But for the record, I’m ok with the deal).

At $65 million over five years, we essentially come up with the following expectation:

Regression is on everyone’s minds. And for good reason.

2011 & Cleaning up the mess other blogs leave behind

Looking forward into the 2011 crystal ball, I think the real question will be can Bautista continue to have success using his recent and highly successful plate approach? 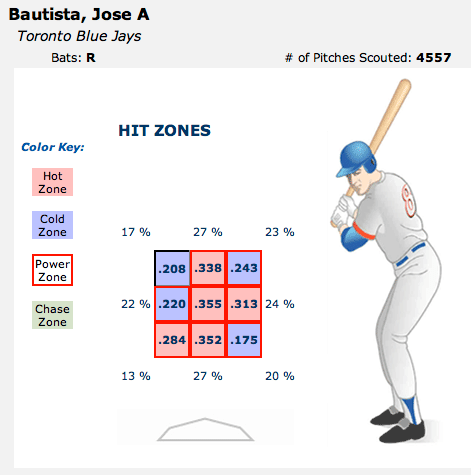 While this chart is a little simplistic, it will act as a set-up for the Pitch F/X charts a little further down the page.

These are human scouted results from over 4000 pitches in 2009/2010, using batting average. As we all witnessed last season, Jose rips the inside and belt high. As with most hitters, he also does well on pitches down the gut. However, what makes Jose special is his ability to control the outside and down portions of the plate. .352 low and center, .284 low & away. 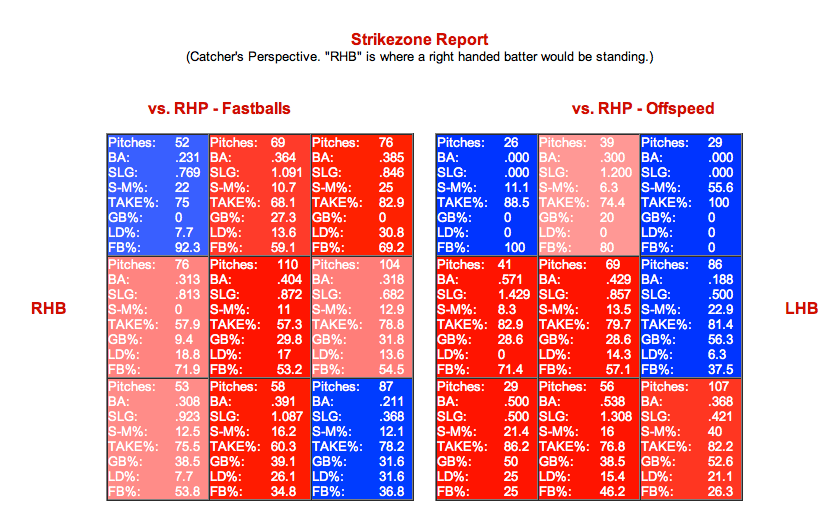 (Note: The vs LHP is almost entirely blue, so I’ve just gone with vs RHP.)

(Also: Sample issues will be present for 2010 data, although it’s difficult to do a standard 3-year trend analysis for a breakout player.)

The viewpoint is flipped on the above chart. Ie the RHP vs fastball .231 blue area is = to the .243 blue box (upper inside corner) on the previous human scouting graphic.

As the graphic shows, Jose once again owns the inside belt portion of the plate (vs fast/off-speed). While he has trouble with the low & away fastball, if a pitcher misses, he’s in trouble -> middle down (1.087 SLG) or away up (.682 SLG).

I’m expecting opponents to really pound low & away with the fastball and straight away with off-speed pitches.

Off-speed should continue to be off the plate. However, a feather in Jose’s cap is his take %. He takes over 80% of off-speed pitches in the low&middle away location. With his historically high walk rate pitchers are going to have to throw off-speed for strikes. And, as with the fastball, if the ball creeps in, Jose can make opposing pitchers pay.

Will Jose be able to adjust to his new ‘book’ and have success this upcoming season?

Although the sample monster will once again rear its ugly head, I’ll come back to the various zone reports a month or so into the season to see how Jose’s holding up.