We posted a little over 2 weeks ago that Jose Canseco had received an invitation to try out for the Quintana Roo Tigres of the Mexican League.  Since then, Canseco has taken to Twitter to document his experiences in the Tigres’ spring camp.

Upon arriving in Cancun, Canseco tweeted about “launching a lot of (batting practice) balls into the jungle.”  The interesting thing about that is, having been to Parque Beto Avila (the home of the Quintana Roo Tigres) myself, there is no jungle anywhere near the stadium.  Perhaps it was just a figure of speech. 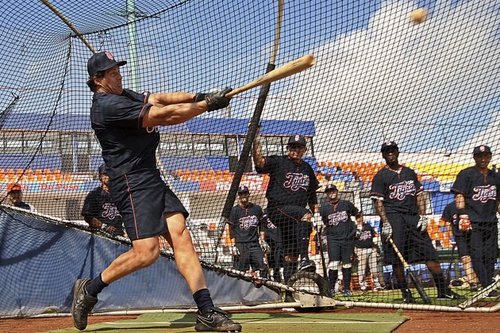 Canseco then travelled 12 hours to Villahermosa on a bus for the team’s first exhibition series. The Cuban-born Canseco took the time to reacquaint himself with the Spanish language and connect with his Mexican fans.

In his first game vs the Olmecas de Tabasco, Canseco went 1 for 3 with an RBI.  The RBI came on a bases loaded walk.  No word on whether the walk was intentional or not.  His first hit? A “rocket to left.” 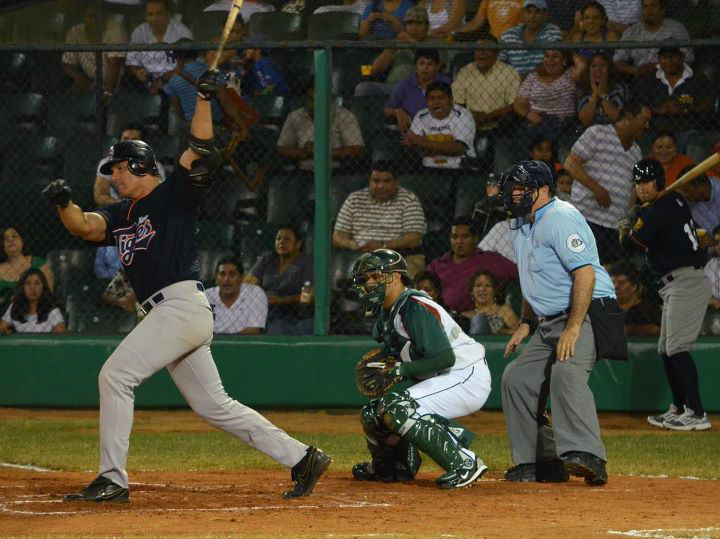 In his 2nd game, this time vs. the Piratas de Campeche, Canseco went 2 for 4 and hit a 2-run bomb – estimated (by Canseco) to be 450 feet.  Regardless, the Tigres ended up losing the game 4-3.  Game 3 pitted the Tigres against the Delfines (dolphins), an expansion team.  Canseco walked on 4 pitches before the game was rained out.  The Tigres went on to tie Tabasco in the 4th and final game of the series. 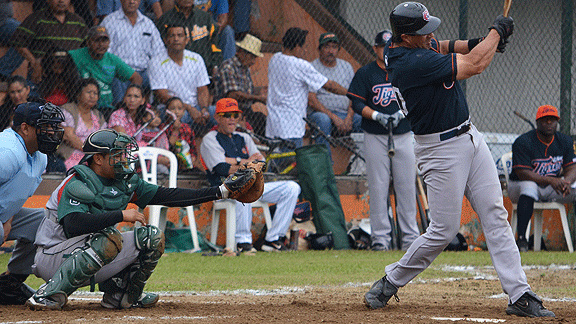 In total, Canseco went 4 for 11 with a home run, 4 RBI and 3 walks.  Following the series he began to refer to himself as the Cubano Cañonero – the Cuban Cannon.

His final chance to impress the Tigres brass came on Saturday in an exhibition game vs. the Campeche Piratas on the Isle de Mujeres (Island of Women).  He racked up 2 hits in the game and was all smiles afteward. 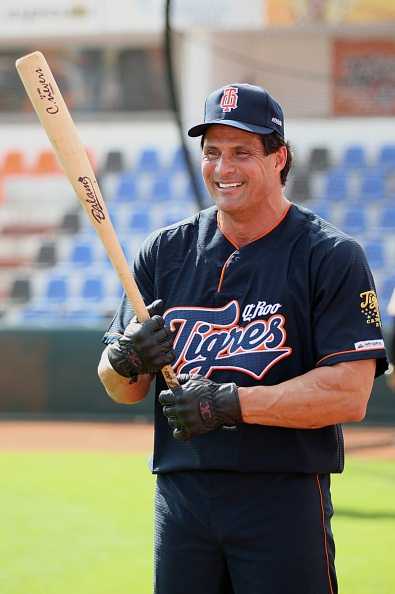 But would it be enough?

This comes as a surprise to Mexican League president Pliny Escalante, who said that Canseco has no place in the Mexican League based on his involvement with steroids in the past.

“To our knowledge, (Jose) Canseco only came to train at the invitation of Cuauhtemoc Rodriguez (Tigers manager), who is his friend.  A player like him – almost 50 years old and who has had so many problems – has no place in our league.”

The decision as to whether Canseco made the team was not announced on the Sunday and Canseco travelled with the team to Mexico City to play the Diablos Rojos in an exhibition tilt.  Following the game,  it was announced that Canseco would not be a part of the Tigres or the Mexican Baseball League due to his refusal to submit to a drug test.

“The player Jose Canseco admitted to taking a substance that is prohibited by the World Anti-Doping Code and he did not submit the necessary medical documentation in regards to the treatment he is undergoing. This documentation is required for such substances when he undergoes doping control tests, as a result he may not participate in the LMB,” said Nestor Brito Alba, Operations Manager of the Mexican League.

Canseco has a prescription for testosterone supplementation due to his body’s inability to produce testosterone naturally as a result of years of steroid abuse.  With the beginning of the Mexican League season only a week away, the team has opted to carry the maximum 5 foreigners allowed and of those 5, Canseco is not included.

“He has documentation which says it is a treatment where he takes certain medications, which when taken will result in a positive test. The resolution of the league is that if you have the documentation and send it to committee studies and prove that the treatment that causes a positive test is necessary, he would be allowed to play.

It’s a long process and because the season starts in a week, we need to have a full roster or lose out on a roster spot for a foreign player. We will start our season with five foreigners – without Canseco – and return to Cancun to explain to Canseco the procedure to be carried when such cases occur, where the body medically required for prohibited substances by the Agency World Anti-Doping Agency (WADA), and because we are an affiliate of the Major Leagues.”

Canseco, of course, turned to Twitter to voice his displeasure with the decision.

Hmmmm I wonder? Perhaps it was League President Pliny Escalante, who publicly stated that Canseco has no place in the league. 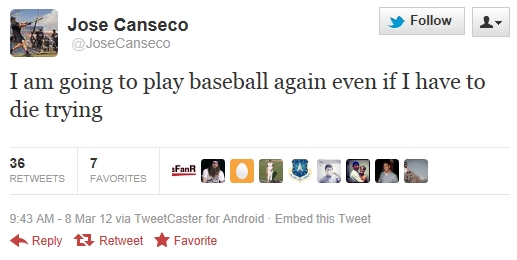 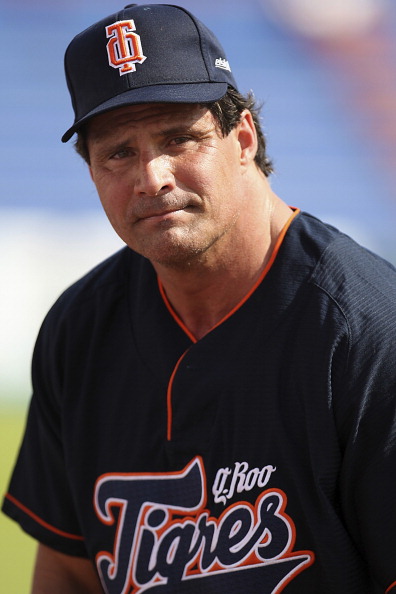 So, it appears Canseco’s journey back to the Majors has stalled – perhaps temporarily.  It certainly would have been fun to see how he would have fared in the Mexican League this season.  Last season Canseco played for the Yuma Scorpions of the independent North American Baseball League.  This was his line:

The North American League is a low low low A-level league and Canseco didn’t fare too well in it.  The Mexican League is considered to be at the Triple-A level, so it would be interesting to see how Canseco stacks up against high-level competition.  To be fair, Canseco’s role as player/manager for the Scorpions was a bit of a circus.  One would assume that Canseco would be far more motivated to succeed when playing for a legitimate team in a legitimate league.  As well, the Mexican League is tailored to Canseco’s strength: power.  With many Mexican League teams playing in cities with high altitudes, the ball carries quite well (like it used to a Coors Field before the use of the humidor).  As a result, power numbers are inflated.  That said, Canseco’s home ballpark in Cancun, Parque Beto Avila, is at sea level.

We’ll be sure to keep you posted on any developments on this former Toronto Blue Jay’s mission to continue playing baseball at a high level.  Speaking of former Blue Jays, Jose’s partner in crime, fellow-former-Blue Jay Joey Gathright, injured his quad during the camp. Judging by the ominous tone of Jose’s tweet, the injury must be serious. 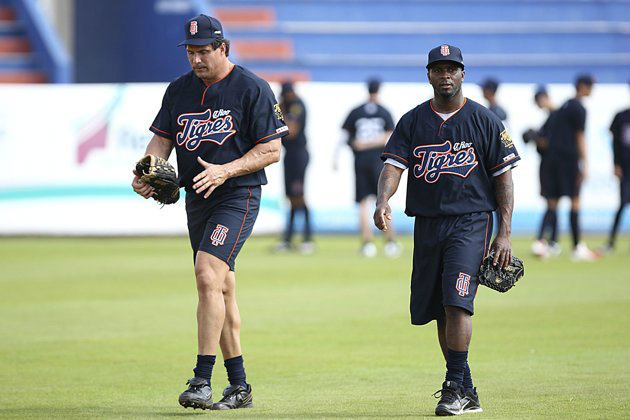 Quad injuries are a serious injury indeed.  For a 1-tool burner such as Gathright, this is the worst possible injury he could have sustained.  It might spelll an end to his blazing speed and baseball career in general.  Let us reminisce: 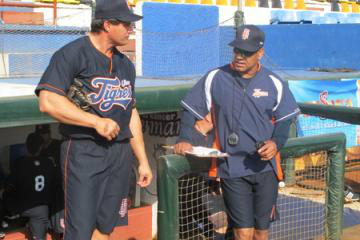 All photos courtesy of Jose Canseco and the Tigres de Quintana Roo, unless otherwise indicated.