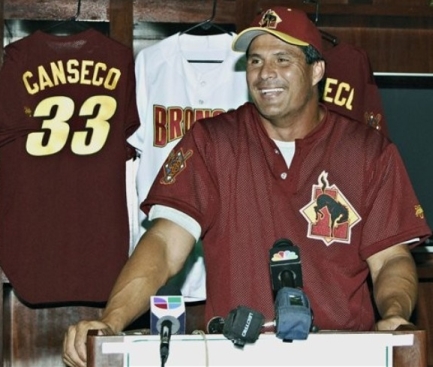 Jose Canseco has long toyed with making a comeback.  Recently the 46-year old Canseco has stepped up his efforts. 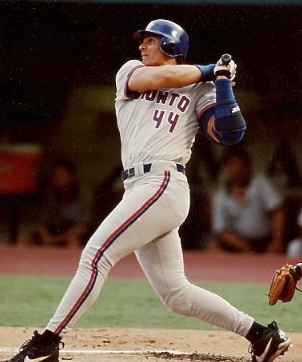 This past summer Canseco signed a contract with the Laredo Broncos of the United League, an independent league based in Texas.  Proving he still has the bat speed that he talks about so often on Twitter, Canseco hit a home run in his first at bat:

For a guy who is no longer on steroids, Canseco sure is looking jacked!

Yesterday Canseco posted a video of him taking batting practice with an iron mike (a type of pitching machine) that was pitching fastballs at 94mph.  He posted the video with the intention of getting New York Mets GM Sandy Alderson’s attention.

He hopes to get a tryout and he envisions himself playing first base.  Personally, I feel that it would be extremely difficult and highly unlikely for a 46 year old with limited mobility (see Canseco’s home run trot in the first video) to secure a roster spot on an NL team.  With a 25-man roster,  the luxury of having a player relegated to pinch-hitting duty simply doesn’t exist.  If he is serious about making a comeback, the only way for him to do it is to get noticed by playing independent league team such as the Atlantic League or the Golden League.  Recent reclamation projects from those leagues include Mark Prior and Jay Gibbons.  Although Canseco hasn’t played professionally in 9 years, I’d love to see him try.  I love a good comeback story and can empathize with what he is going through.  Even if he is a bit crazy.