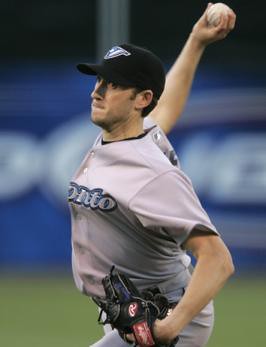 I hate Josh Towers and this is why.

Legendary whinger – Josh Towers – has been up to his old tricks.  Below I will highlight some of the lowlights  that help to explain why I hate this guy. 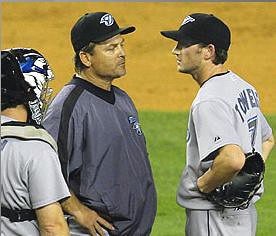 Here we have a picture of Johnny G coming out to pull Josh Towers in the 6th inning against the White Sox in late July.  This is what JT had to say:

“I was shocked to see him come out in the sixth inning,” Towers suggested of his manager John Gibbons. “We were winning the game and I thought I was pitching well. It never even dawned on me that I’d be coming out. (Scott) Podsednik had rolled into a double play and got out (on a grounder) the next at-bat also.

“I was completely surprised. I thought I was in control and throwing the ball well. I didn’t even think that I was coming out. I asked to stay in the game, but he had already made up his mind. I don’t think that we showed up today. I think it was a horsesh– game, all around. We just gave the game away.”

You were shocked Josh? Oh really. I am shocked too… that you even have a spot in the rotation. Josh, do you remember last year when you cost the Jays 10 losses in your 12 starts and had an ERA over 9 before a few meaningless relief appearances in September? I do.  You also gave up 17 ding dongs in 66 IP and are on pace to do much of the same.  In a close game I don’t want you pitching to the likes of Konerko, Thome and Dye and neither does Gibbons. I don’t even want Towers to face the light-hitting Jerry Owens.  The Jays are theoretically in a wild card race and every game is a must win. So, as much as you think you were in “control” of the game, everyone in the ballpark knew otherwise.  Johnny G was right to pull your sorry ass.  Gibbons is trying to put his team in the best position to win and that position is your ass on the bench.

If that weren’t enough, Towers went further and threw the rest of the team under the bus. Why blame yourself when you can blame your coaching staff and teammates?

“I’ve been one of the biggest supporters of Josh Towers,” an obviously annoyed Gibbons said. “I thought he pitched a tough ballgame. Did it look to you guys like it was a lack of effort? Yeah, that was a game we should have won.”

Last night  uber tough guy Towers threw at Alex Rodriguez’s knees, even after Litsch did the same the game before. Stray Rod then talked trash as the yappy Towers barked back while he walked towards him.

“I was kind of caught off guard,” said Towers of Rodriguez’s initial move towards the mound. “I just told him to go down to first base. He really didn’t show any intention of coming out (to the mound). 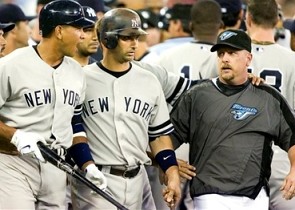 You’re right, he had no intention of coming to the mound once he saw 50 guys instantaneously appear on the field (not to mention a fierce bulldog by the name of Matt Stairs) standing between the two of you. It wasn’t because Rodriguez was afraid of big bag Joshie. 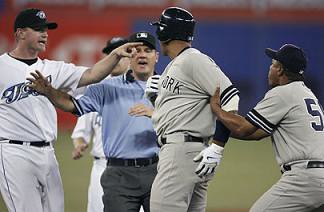 To top things off, Josh Towers thinks he is above being talked to by Tony Pena. 5 time all star, 4 time gold glover, he of the 17-year-career Tony Pena.

I heard somebody chirping when I was talking to Lyle [Overbay] … Tony Pena is running his mouth off and I was like, ‘What’s this guy running his mouth off for?’ “He’s a quitter,” Towers said of Pena, who used to manage in Kansas City before joining the Yankees. “He’s managing a team and quit in the middle of the season because he couldn’t hack it and he’s going to run his mouth to ME?”

Who does Josh Towers think he is?  I don’t even know how to begin to responding to this comment.

One last one from Josh:

“We stood up to them,” he added with some pride. “A lot of guys had my back. We’re tight-knit here.”

Those same guys who you threw under the bus had your back. Count your lucky stars, Josh, that they did – and that you even have some sort of a major league career.  It won’t last for long.  Believe that.

And for the ladies: 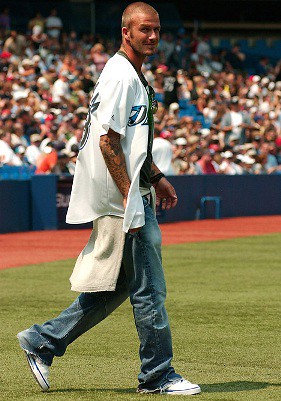