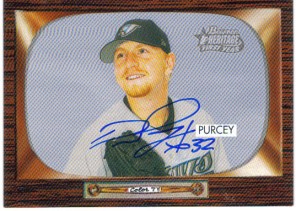 Super quick post for anyone headed out to the ballpark or settling in-front of the ‘box’ for tonight’s Jays game.

In his last appearance David Purcey threw 38.8% sliders. He had one of the oddest starts in history, as he struck out 10 but walked 6 in less than 5 IP. He allowed 4 ER. During this game 95.5% of pitches thrown were either fastballs or sliders.

Purcey’s debut start was far more successful, as we went a full 7 IP, allowing only 2 ER. In this start David only threw 13% sliders.

Take home: If Purcey can command his fastball he’ll be ok. If he has to resort to his second (and essentially only) other pitch, his slider, he’s probably battling command issues and thus will be less effective.