Striking batters out and keeping balls in the park. It sounds simple enough, but a K/HR ratios may be an interesting stat that is often overlooked.

Fan Graphs: The FIP formula is (HR*13+(BB+HBP-IBB)*3-K*2)/IP, plus a league-specific factor that scales FIP to match league average ERA for a given season and league.

I choose not to use FIP because it already included HR in the formula. Instead I used xFIP

Expanding on FIP, xFIP realizes that some pitchers may be incredibly (un)lucky on their Home Run per Fly ball (HR/FB) rates in a given year, while starting pitchers should expect that rate to be around 10.6%. Theoretically, this should be a better predictor of a pitcher’s future ERA. xFIP is calculated exactly the same as FIP, with the exception of the Home Run component, which makes the formula look like this:

This newly introduced term helps normalize some of the variation that is inherent in FIP due to the aforementioned luck factor on fly balls leaving the park.

Essentially xFIP strips out HR, replacing it with a set flyball to HR percentage. Saber nerds seem to prefer xFIP over FIP.

Beside the K/HR ratio I’ve included xFIP numbers (taken as of Sept 28th from Fan Graphs). xFIP scores in the 3’s are highlighted in green, scores over 4 are bolded. 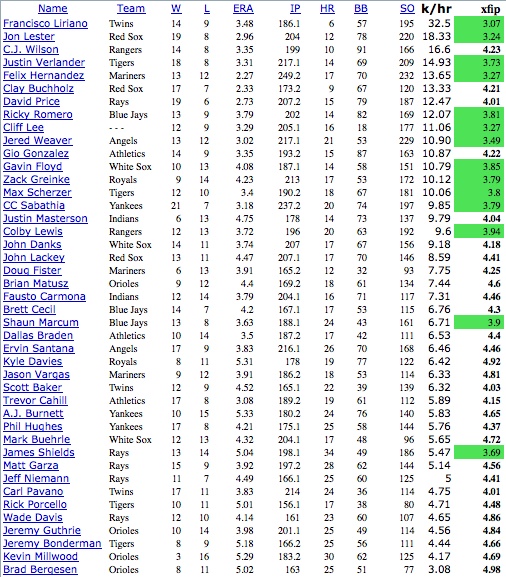 As we can see from the table, pitchers that have a high strikeout to HR ratio also have a lower, on average, xFIP score. Only two pitchers with K/HR ratio’s under 9.5 had xFIP’s under 4.00 .

Obviously an extra HR here or there will drastically change the K/HR ratio. Although one interesting point to note is that the BB rates don’t seem to differ greatly, regardless of a pitchers K/HR ratio.

It appears that, by using K/HR and xFIP, that the elite pitchers really do have an ability to limit HR against.

If xFIP is considered to be a better indicator than ERA when it comes to current and future success, perhaps a K/HR ratio should be considered, although more research and fancier regression analysis are needed.