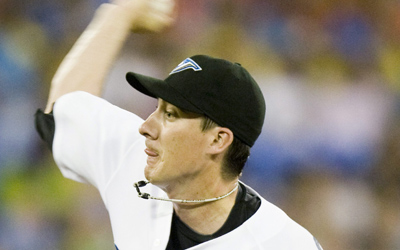 I don’t want to be that guy but since I took some shit in the comments section for sharing my thoughts on Richmond earlier in the year (Everyone needs to stop over-rating Scott Richmond) I’ll make this post.

Scott has quickly added a few runs to his ERA, seeing it shoot up to 4.28 (along with his record drop down to 4-2). I’m writing this post before the end of the actual game, so I don’t have any ratios in front of me, although Richmond did have the third highest LD% against heading into tonight’s start.

To me its pretty obvious that his components have caught up with him. He was lucky early in the season in terms of FB to HR ratios, along with BA vs LD%. (See my post Why I don’t think Scott Richmond’s success will continue). He really doesn’t have any plus MLB pitches. Sure, he’s a nice story and judging from interviews he seems like a nice guy. I don’t have any personal vendetta against this guy and I’ve even given space for a guest post expounding the virtues of his game (The Case for Scott Richmond). But I think the facts are the facts: he’s just not an MLB caliber starting pitcher.

Deep, Deep, Deep. Richmond’s affinity to the Flyball (and certainly his high Line Drive Percentage) is starting to take its toll.

When a few of the injured arms come back I think it’s time to send Richmond to the pen. I’d rather have Doc, Tallet, Cecil & a Janssen + Romero combo in the rotation than Richmond.