Matsuzaka, Boras, and the Posting Process

Much has been ballyhooed about Matsuzakaâ€™s agent, Scott Boras walking away from negotiations with which ever team wins the posting lottery that is currently taking place, instead opting to wait another year and have Matsuzaka enter the market as a true free agent. Well, its not gonna happen. Hereâ€™s why.

I donâ€™t know about you but, not for one second, think that some type of collusion will not go on between Boras and certain MLB teams. I could certainly see Boras saying something along the lines of; â€œIâ€™ve heard that Texas is offering $24 million, come on, out do them and weâ€™ll cut you a break come contract time.â€ Are you sitting there, asking if Kman is out of his mind? Well you can call me untrustworthyâ€”which I amâ€”but the history of Baseball leaves much to be desired in the way of truth and fairness, instead opting for more colorful collusion and corruption.

Yet, letâ€™s say for a minute that I am out of my mind, and that the posting process is on the up-and-up. This could end up being bad, bad news for Matsuzaka. Why? Simple, sponsorship money. Heâ€™s bound to make a hell of a lot more money in sponsorships if heâ€™s in a New York, LA, or Seattle. These regions are either â€“ or both– major media centers or have a large Asian population. Texas? Baltimore? You get the picture. Even if these teams are willing to pay Matsuzaka a couple extra million per year, it isnâ€™t even going to touch the revenue that heâ€™ll lose on account of being in these markets.

I think that the real bidding war is going on as we speak. Because once a team wins the bidding, Boras is clearly in the driverâ€™s seat. Come on, if a team is willing to pay $20 – $30 million dollars for the right to negotiate with Matsuzaka, its hard to fathom that they would then turn around and get gun shy at the negotiation table. Sure the posting fee is refunded if he doesnâ€™t sign, but the teamâ€™s already shown their hand by tossing around $20 million for the posting fee. Whatâ€™s an extra $2- 3 million over the next 4 â€“ 5 years?

The posting process is clearly a pain in the ass for all involved. The teams have to compete with each other for the right to talk to the guy. The player in question is given no say in where heâ€™ll end up. Once a teams won their bid, the agent has them by the balls.

My solution? Let the free market decide what heâ€™s worth. Have the player negotiate with whomever he likes. This is optimal for the player and the team. And to keep the Japanese teams happy, create a clause that states a percentage of the contracts value has to be awarded. For example, if a player ends up getting a $50 million contract, the team still has to give the player his $50 million but they have to give his old team a 30% â€œreferralâ€ fee, which in this case would work out to $15 million. Be my guest and change the percentage to anything you like, but this system seems to make more sense than the outdated posting process that the MLB currently employees. 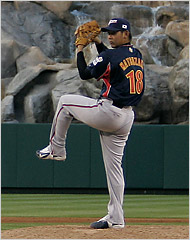