First off, I’d like to apologize for the lateness of this and upcoming ‘scouting report’ posts; I’m returning from a vacation. At the time of my departure, the most exciting acquisition of the off-season was Bobby Wilson. Now that I’m back if seems like half of the roster has turned over– an astounding turn-around in a matter of two weeks. Instead of figuring out where Hech & Gose fit in, the Jays are now ready to field a juggernaut lineup and a fairly deep rotation.

Needless to say, I’m behind on scouting reports/heat maps for incoming Jays. The plan: I’m going to start with Melky Cabrera and work my way backwards, covering the incoming Marlins, a few of the new potential bullpen arms and posting a late rookie review of the outgoing Adeiny Hechavarria.

I’m assuming that anyone reading this (or upcoming scouting reports) is ‘hardcore’. IE I don’t have to delve into the obvious such as Melky’s steroid issues, etc. For better known players I’ll post quick notes, for lesser known players such as the bullpen arms, Bontificio, etc I’ll include additional info.

Before jumping into splits, etc I have to talk about the luck factor in Melky’s 2012 season; there’s just no escaping this fact.

It’s safe to say that his high overall BABIP can be attributed to an INSANE .322 batting average on ground balls; MLB average of GB was .260

But luck isn’t the only reason for his 2012 success; Melky has always trended on the high end of the line drive curve. This year he hit 21.8% linedrive rate; his career average is 19.7%

What we have is a player with a very high BABIP in 2012, yet also a player that ranked 68th percent in well-hit-average, as well as 84th percentile in linedrive rate. There’s more to the story than plain old luck. 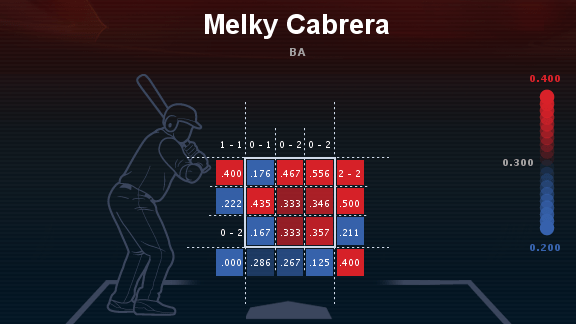 The quick conclusion from the chart is; “why pitch him away?”. And the quick answer can be found within his ISO chart: 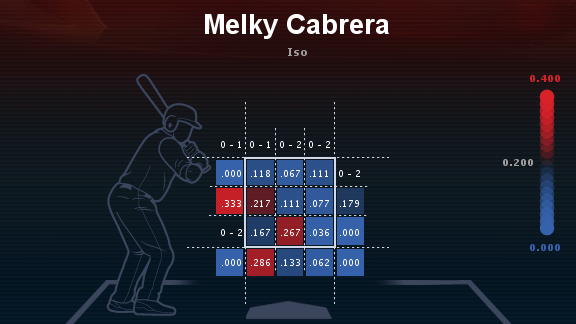 Inside is where the power lies; outside is home of the single.

Inner Half vs RHP:

Outer Half vs RHP:

This creates a “pick your poison” scenario for RHP. Do you pitch Melky away and get singled to death or attempt to bust him in & risk  an extra base hit? 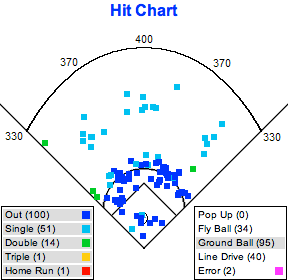 Outside of traditional 2B & SS positioning, there are no real examples of ‘shading’ to this chart, whether a GB goes for an out or a hit.

Melky does a good job vs anything ‘hard’, which includes standard 2-seam, 4-seam, sinkers, etc:

He’s no slouch vs ‘soft’ either (curve, change, slider), although he is more prone to the punch out:

After punching the numbers, I’d feel confident putting Mekly in the #2 slot vs RHP behind Reyes.

I’m going to source Mark Simon from ESPN  when it comes to Melky vs LHP in 2012:

Last season with the Giants, Cabrera saw 335 pitches to that area (my note: lower half strike) from lefties. He turned those into 42 hits but made only 48 outs, and missed on only 10 percent of his swings. 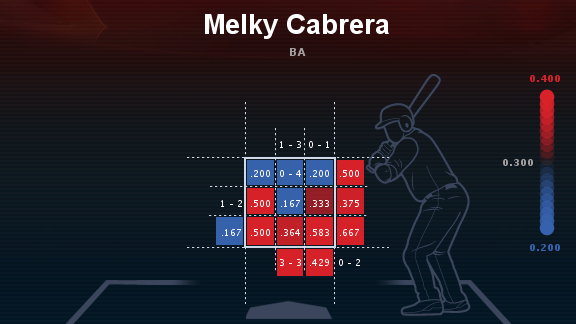 Of course, no hitter is perfect. Melky has trouble with pitches up from LHP:

For some reason he couldn’t handle a fastball up from LHP in 2012:

But he had great success vs up fastballs in 2011

In general, lefties have historically been able to carve up Melky with sweeping sliders low in the zone (.205/.225/.385 vs all sliders from lefties since 2011).

But unless pitchers are committed to pitching backwards, Melky should continue to hit vs lefties due to his propensity to hit ‘Hard’ pitches from letfties. He’s batting .402 vs ‘Hard’ (this includes the troublesome up fastballs) vs LHP since 2011.

One thing that really jumps out when looking at Melky’s stats is his awareness of his strengths & weaknesses; Melky excels vs ‘Hard’, and his only real weaknesses are curves from RHP and sliders vs LHP. To counteract this, Melky is very aggressive, and ends counts in quick order.

Cabrera is able to attack early in counts, and maintain a high level of success due to his ability to do damage on pitches out of the strike zone: 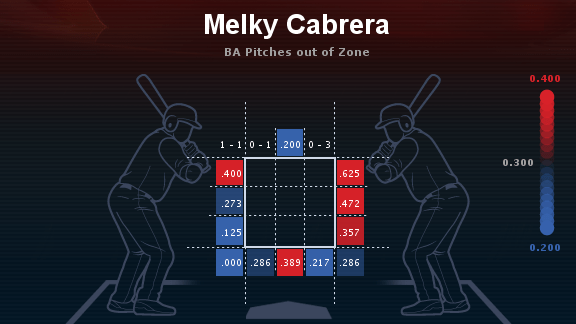 When it comes to his offensive game, there isn’t much to dislike. Sure, his BABIP is likely to come down, but he’s a linedrive machine & a smart hitter.

Melky’s proven that he can hit in the AL with his solid 2011 season for the Royals. Even with an ‘aided’ 2012 season, I see his 2013 downside being around 3.0 WAR, with upside to 4 or even 5 WAR. For an average of $8 million a season, this should prove to be a great value signing for the Toronto Blue Jays.