On July 3rd, 2007, I attended a game between the Quintana Roo Tigres and the Rojos del Aguila de Veracruz in Cancun, Mexico. The following are notes and general observations from the game.

Note: it might be useful to read my Mexican League primer article, which can be found here. It covers the history of Mexican baseball and touches on the Quintana Roo Tigres in particular. 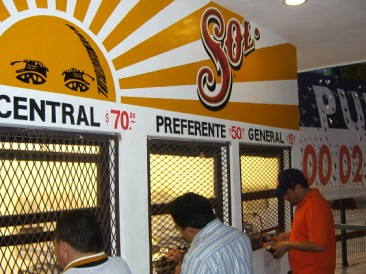 To begin with, the Tigres de Quintana Roo play in a 9,000 seat stadium known as Estadio Beto Avila. The ballpark is named after Mexican ballplayer Bobby “Beto” Avila, a long-time Cleveland Indian. The park is accessible by public transit and is located in Cancun’s city centre. Tickets for the game are very reasonable. The best seats in the park work out to $7 Canadian, preferential seating is $5 and bleacher seats are $1.50. 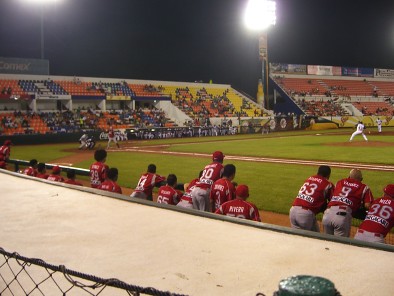 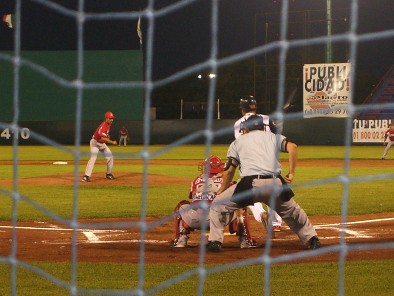 Although the stadium’s maximum capacity is 9,000, at this particular game I would estimate that there were about 1,500 – 2,000 fans scattered throughout. Needless to say, this was a disappointing turn out. However, the fans in attendance were more than enthusiastic in supporting their Tigres.  It should be said that this was the first season for the Tigres in Cancun, as the team had just moved from Puebla following the 2006 season.  Cancun last had a professional team in 2005, the Langosteros (Lobstermen), and they finished last in both the first and second halves of the season before folding. 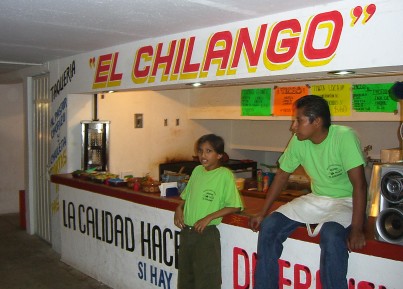 Hot dogs and pizza are available, much like in many ballparks in Canada and the U.S. But in Mexico, you can get tacos, chicharrones, fresh potato chips cooked on-site, pastries, and enchiladas. The tacos are reasonably priced; three tacos cost approximate $4.50 Canadian. 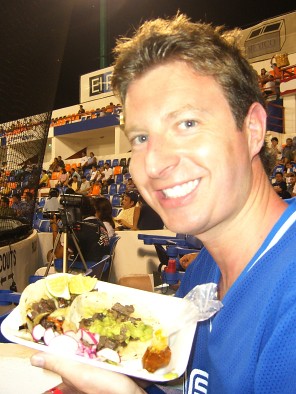 I tried the tacos and they were delicious. As for beer, since Sol is the main sponsor of the Tigres, it’s the only brand of beer to be found in the park. It certainly isn’t the best Mexican beer you can have, but it’s pretty tasty and only costs $2 per glass. 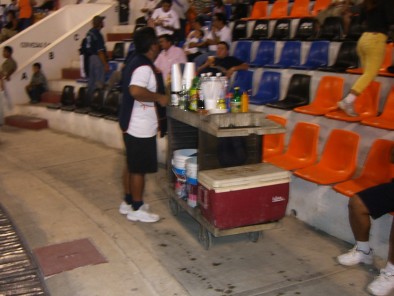 The Tigres also employ a mixologist who walks around  the lower level with a fully stocked bar cart, offering fans whatever drinks their hearts may desire. This is a genius idea that definitely should be adopted north of the Rio Grande. 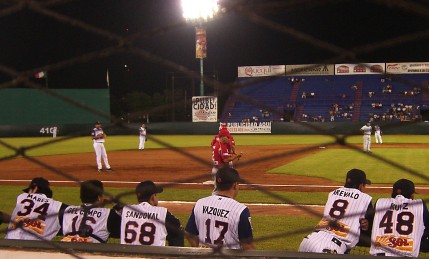 Onto the game! The Tigres starter was Miguel Ramirez and he was squaring off against Adolfo Garcia for the Red Eagles of Veracruz. Let’s talk about the pitchers for a moment. Ramirez has an ERA below 2.00 and I have no idea how he does it. The strike zone for this game was extremely tight and Ramirez has fringe stuff at best. I would like to compare him to a right handed Jamie Moyer. I was just waiting for him to get crushed but it never happened. I am not sure how he does it, but he shut out Veracruz for 5 innings. Adolfo Garcia, on the other hand, was just garbage. Quintana Roo feasted on him from the get-go.

One time league-leader in home runs, Jorge Vazquez, hit two doubles and was 3-for-4 on the night. This guy has big time gap power and had his way with Veracruz pitchers, despite them nibbling the corners. Shortstop Javier Robles chased Garcia with a grand slam home run – an absolute moonshot. This guy is the total package at shortstop, hits for power and average (.342), and is a stud defensively. The Mexican fans went crazy over the slam, making as much noise as 25,000 Blue Jays fans at the SkyDome. 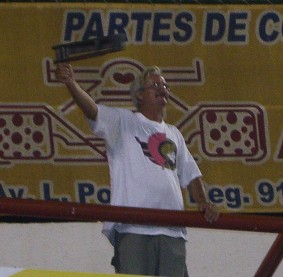 As you can see above, you never know when an Ottawa Senators fan is going to show up to a Mexican League game swinging a cowbell! The atmosphere is great, very lively, with all the fans appearing to be quite knowledgeable about the game of baseball. They are not shy about cheering on their Tigres as well as letting the umps have it for questionable calls. It is a party atmosphere to be sure. It’s also a family-friendly event; I saw many children running around. Hopefully this translates into future Mexican baseball fans. 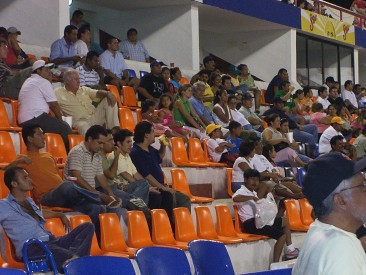 Adolfo Garcia was chased for a lefty specialist, Erubiel Gonzalez. He didn’t fair too well, promptly giving up two more runs. He, in turn, was chased for lefty Noe Romo. He is a “crafty” lefty with a very smooth, fluid delivery. I liked the cut of his jib – he kept the Tigres off balance for an inning and a third, but by that time it was already too late.

For the Tigres, Ramirez scratched through 5 innings before being replaced by Esteban Haro. I loved this kid. After a four-pitch walk to the first hitter he faced, he settled down and trusted his electric stuff. He was able to pump 91 mph fastballs out of his 165-pound frame, not to mention a filthy 12-6 curve. After his 4-pitch walk, he struck out the next hitter on three straight pitches. He features a slider with good tilt, a fastball with tailing action, and a Mariano Rivera-esque (obviously not as good) cutter that he fires in on the hands of right handed hitters. I was really, really impressed with this right-hander as he struck out three over two innings of work and gave up no runs. Maybe the next Joakim Soria? Probably not.

Another note worthy of mention: I was sitting beside the radar gun and it was plugged right into the scoreboard. No one was operating it (as is the case at the SkyDome) and dressing up the readings. If the pitcher was reading 91 or 92 on the scoreboard, that’s what he was actually throwing.

I had the pleasure of sitting with Sr. Mario Valenzuela, the Gerente Deportivo of the Quintana Roo Tigres, who filled me in on the Mexican League gossip. I was wondering where former MLB player Randall Simon was  – he had been playing with Veracruz up until June 29th. Mario told me he has stopped playing for unknown reasons and did not know what has happened to him. I also asked him about former MLB player Antonio Osuna. He has left the team, along with other stars such as Erubiel Durazo, to join the Mexican national team at the Pan-American games.

A shout out goes to the gentleman who kept calling me “Toronto.” He played for the Cuban national team in 1976 (or so he says) and was in Canada at that time for the Olympics.He had nothing but good things to say about Toronto and its beautiful people. The only thing is, the Olympics were held in Montreal. Oh well. Special thanks to Sr. David Velez, Gerente de Relaciones Publicas, who provided yours truly with media credentials to cover the game. 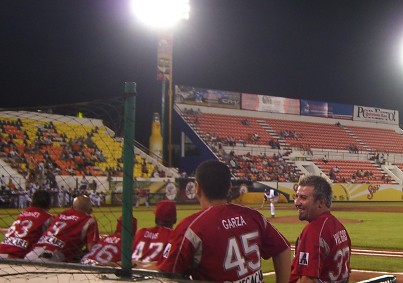 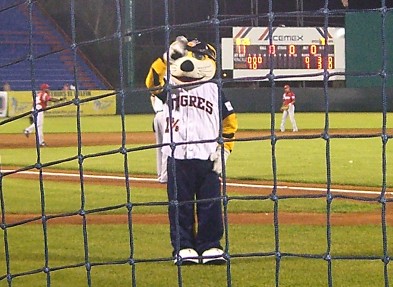 The Tigres’ (and Mexican League’s most famous) mascot, Chacho 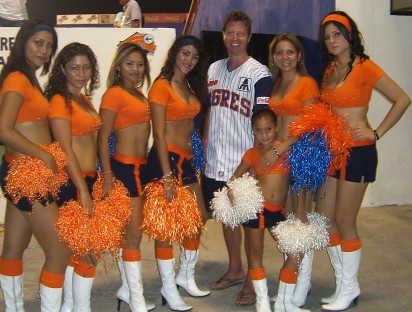 The best part of the game: getting to pose with the Quintana Roo Tigres cheerleading squad

For more information on the Mexican League and the teams:

Mop-Up Duty on the Mexican League